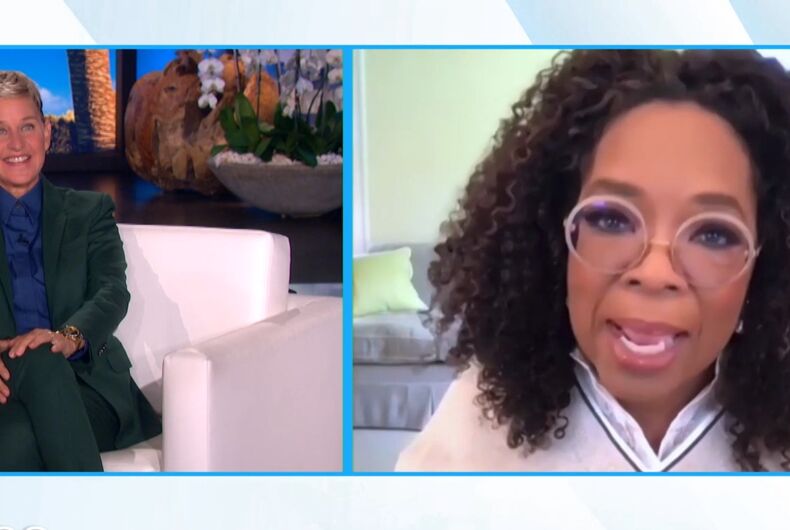 Ellen fought back tears as she announced that her show is ending in an emotional monologue. She then explained why in an interview with Oprah Winfrey.

“This show has been the greatest experience of my life, and I owe it all to you,” she said in the monologue.

Related: Ellen is so desperate to move past George W. Bush criticism that she kissed Howard Stern

Yesterday, news broke that her show would end after 19 seasons and Ellen said that she was just not feeling challenged anymore. While she discussed this past year’s controversies that involved her, she said that they were not the reason she was ending the show.

Today, Ellen went through her funny monologue, fighting back tears as she told jokes.

“I want you to know that I’ve thought a lot about this decision,” Ellen said.

She said that she knew since she signed her contract for three more years in 2019 that “Season 19 would be my last.”

Then she welcomed Oprah to her show. Oprah ended her legendary daytime talk show in 2011 after 25 seasons.

“When you told me that this was gonna happen, I just wanted to be here, for you, on camera, off camera. To support you,” Oprah said

She immediately turned the tables and started interviewing Ellen. “How are you actually feeling, though? How are you really feeling?”

Ellen said that she couldn’t even rehearse her opening monologue, because it made her so emotional.

Ellen did not talk about any of the controversies she was involved in this past year.

Oprah and Ellen have been friends for decades. Oprah appeared on the 1997 coming out episode of Ellen’s sitcom, where she played the role of Ellen’s therapist. Ellen then went on Oprah’s show to discuss coming out, where one of Oprah’s audience members ranted at her that gayness is “being shoved down our throats.”

The decision to end her show follows a year of negative coverage in the press, including dozens of former staffers who said that her show as a toxic workplace. Several senior producers were accused of sexual harassment in the workplace.

Ellen promised an investigation and several producers were fired. She apologized to her staff and said that changes were implemented.

At the start of the show’s 18th season this past September, Ellen discussed the allegations on her show and said that she is trying to do better.