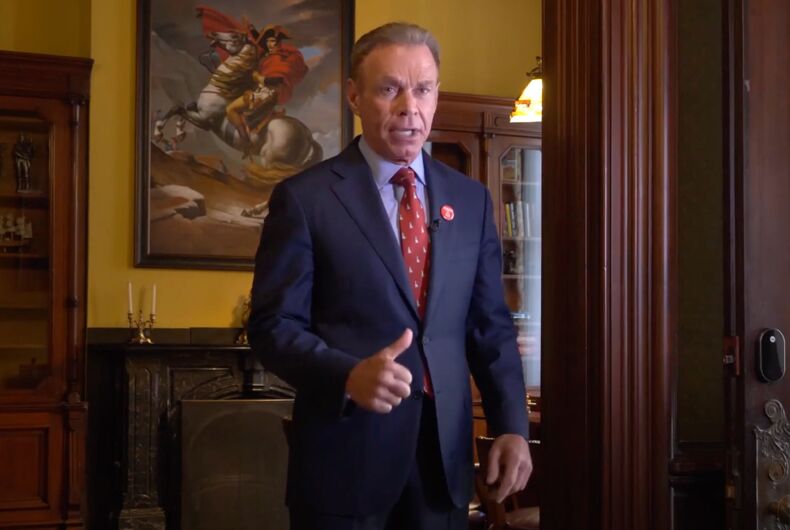 Peruto’s website features an explanation for “the girl in my bathtub” and promises to appoint a special “gay bashing” prosecutor who would look “as opposite of gay you can imagine” so they’d win more cases.

Related: No one likes Caitlyn Jenner according to “bleak” new poll

In 2013, Julia Law, Peruto’s former paralegal, was found dead in his bathtub. He was on vacation with his family at the time. The two had been dating for a month and a half.

Peruto was cleared of any wrongdoing after a grand jury investigation initiated by “a bitter enemy of mine,” District Attorney Seth Williams, but his rambling “about me” section paints him as the victim of the accident and Williams as the villain.

“Instead of me hiding and refusing to give a statement or explaining myself, I took to Facebook, and called him every name in the book,” Peruto writes. “At one point, I actually offered to fight him in front of the District Attorney’s Office with his 3 police guards observing.”

A former Democrat, Peruto says he’s running because he loathes the current District Attorney, Larry Krasner. He promised he would drop out of the race if Krasner loses the Democratic primary.

philly what the FUCK pic.twitter.com/Jd3ZRdvPNA

Peruto’s website also featured a section on “gay bashing” that has now been removed. He promised to appoint a special-full time prosecutor with some questionable qualifications.

“Having tried some three hundred jury trials, I know what it takes to win them, and it would not be my preference to have a prosecutor who would be remotely perceived as gay arguing these cases before a jury,” the section read. “I would assign an older, seasoned prosecutor who looks as opposite of gay you can imagine.”

“When you have a very effeminate male prosecutor, it could possibly be perceived that the prosecutor if going after the defendants because he’s gay,” Peruto told Billy Penn. “I want to make sure we have a very macho prosecutor to defend the rights of gay people to live in harmony and in peace.”

Asked why he took down that section, “The public’s not ready, it’s too controversial.”

According to the WayBack Machine, the "gay bashing" section that went viral on Philadelphia Republican DA candidate Charles Peruto's website is completely real.

"I would assign an older, seasoned prosecutor who looks as opposite of gay you can imagine." pic.twitter.com/u8xiI5Ojab

Chick-fil-A is running out of sauce & Republicans are blaming… Joe Biden?