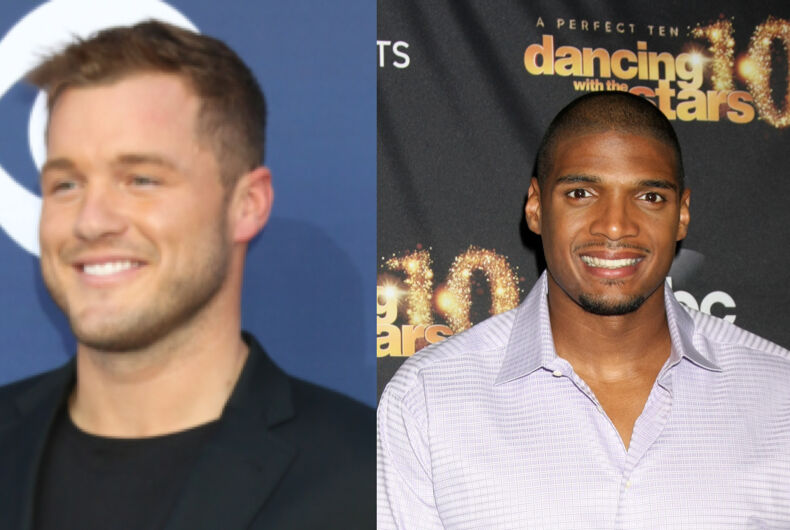 Colton Underwood, the former NFL player who has appeared on multiple Bachelor series and came out last month, explained more about his decision in a recent interview.

Discussing his decision to come out now, the ex-football prospect reportedly fought back tears when explaining how much he has relied on the guidance of fellow out football player Michael Sam, expressing regrets that he didn’t come out at the same time Sam did in 2014.

Related: Billy Eichner slyly called out Colton Underwood on “The Bachelor” years ago for being gay

Underwood is profiled in the latest cover feature for Variety, and more details from his interview with the magazine are coming out. Variety reported that during his sit-down, Underwood reflected on the fact that he “had the opportunity in 2014 when I entered the draft,” because “Michael Sam came out” prior to the draft.

Underwood was “getting choked up,” wrote Variety senior correspondent Elizabeth Wagmeister, while he was expressed “his regret and [said] he was not brave enough at the time.”

Being taught “that being gay was wrong” under his upbringing with his family in a “religious and conservative small town” contributed to that.

Underwood was drafted in the same class that Sam was, and both played defensive end. Sam went to the then-St. Louis Rams as a seventh-round pick, while Underwood was undrafted, but signed right after by the San Diego Chargers. Neither would ever see regular-season action.

But in his time in the Chargers locker room, Underwood recalled how his teammates talked of Sam and other gay people, and from that experience he still believes, “the football and athletic community is not ready for gay people.”

Underwood revealed that he not only has talked with Sam about this, but that Sam was one of the first people he contacted after coming out on Good Morning America.

“I just sort of had a heart-to-heart with him… I said, ‘I just want to let you know that you should have given me the confidence to stand up and say, you’re not alone, but unfortunately, I went to a different locker room,'” he retold to Variety. “And I told [Sam], ‘In the locker room that I was in, they didn’t say nice things about you.’”

Underwood apologized for not coming out, telling Sam, “I didn’t have the courage and I wasn’t at a point in my life where I was ready to come out.”

“If anything, Michael Sam coming out and being so public about it put me in the closet even further because I didn’t want to be like Michael, in the sense that I didn’t want it to be negative or bad,” he recounted.

One revealing part of @EWagmeister's fascinating cover story on Colton Underwood is how he talks about what happened in NFL locker rooms when Michael Sam came out.

NO ONE supported it, and it drove Colton deeper into the closet. https://t.co/o90sCK8UN3 pic.twitter.com/NGCrC2RUfs

Sam has not commented on Underwood’s revelation, but Sam has previously expressed his own regrets about coming out before the draft. During a speech in 2019, Sam told University of New Mexico students that he believes coming out right after his college career hurt his chances of being picked up by a major league team.

In the same interview for the Variety profile, Underwood shared that he had “never” planned on coming out and was spurred to do so only because he “was getting blackmailed.”

After being contacted by the blackmailer, the “Bachelor” alum slowly started coming out, first to his publicist, then to a small circle. He and his ex-girlfriend Cassie Randolph were filming a new reality series together last summer about their friendship in L.A. that was never formally pitched. It was her restraining order that ended that venture.

The production company then heard that Underwood was gay and decided they wanted to do a show about him coming out. Underwood said he thought his story would help others, so he agreed and the show was sold to Netflix.

That show – which will feature “gay guide” Gus Kenworthy – also has faced stiff criticism. It was announced the same day that he came out on Good Morning America and led to insinuations that he came out just to advance his career. Others have said that no one wants to watch another show about a wealthy, muscular, white gay man, and a petition was even spawned to cancel the show because of how Underwood allegedly treated Randolph.

Underwood said that the Netflix show is going to be mindful of his privilege.

During our convo for this week’s cover story, @colton spoke about the impact #MichaelSam coming out had on him, as the first openly gay player in the NFL. He said Sam was made fun of in locker rooms & the homophobia only pushed him further into the closet. https://t.co/VaanFkdCWP