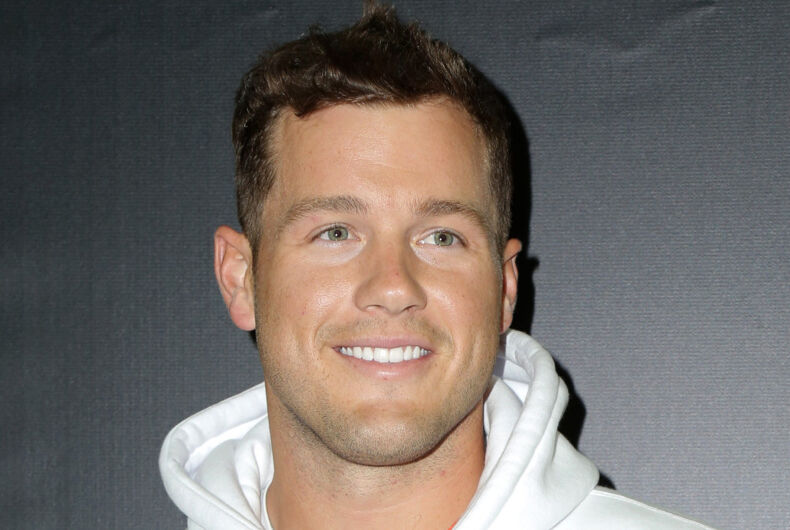 Bachelor star Colton Underwood said that he didn’t come out as gay last month because he was ready to or, as the more cynical have said – to promote his upcoming Netflix reality show, but because he was forced to.

“I’ll just say it,” he told Variety, “I, at one point, during my rock bottom and spiral, was getting blackmailed. Nobody knows I was blackmailed.”

Underwood said that he as deeply in the closet last year when he visited “a spa known for catering to gay clientele” in Los Angeles.

He said that he went “just to look” and that he “should have never been there.” He later got an email from an anonymous person who said they had nude photos of him and threatened to out him to the press.

At this point, Underwood had already appeared on three different seasons in the Bachelor Nation franchise, where he was assumed to be straight and pursued relationships with women. He was the star of Season 23, where he was branded “the virgin bachelor” and 30 women vied for a chance to have a relationship with him.

“I literally remember praying to God, the morning I found out that I was a bachelor, and thanking him for making me straight,” Underwood told Good Morning America last month about being cast on that season. “I remember that vividly, saying ‘Finally, you’re letting me be straight. Finally, you’re giving me a wife, a fiancee, that I’m gonna have the kids, gonna have the house.’”

Cassie Randolph won the season, which ended in 2019, and they dated for a year before splitting up. She later accused him of stalking her and sending her harassing messages. She filed for a restraining order and police investigated her claims, which included an accusation that he put a tracking device on her car.

She dropped a request for a restraining order against him and asked police to stop their investigation, coming to an agreement with Underwood. Randolph has not commented publicly on the matter, but Underwood apologized to her on-air when he came out in April and again in the Variety interview.

It’s not clear exactly when he went to the L.A. spa. but his first thought was to tell his publicist about the attempted blackmail.

“I knew that out of anybody in my world, my publicist wasn’t going to ruin me,” Underwood said.

He didn’t provide more details about the attempted blackmail, but Variety did confirm that he received the emails he described.

By the time he was cast on The Bachelor, Underwood already had some experience with men. He had an account on Grindr in 2016 and 2017 and he said he hooked up with some men through it, but insists that he didn’t have sex with any of the men.

“I want to make that very clear that I did not have sex with a man, prior to that,” Underwood said. So the “virgin” label, he says, was true.

Underwood grew up in a Catholic family in rural Illinois and encountered homophobia from a young age, especially in sports. He played football and even had a short NFL career, terrified that he would be outed.

“We had one gay person in my entire town,” Underwood said . “And he was the butt of every joke.”

“By the time I realized that I was gay, I didn’t want to be gay. It was easy for me to hide in plain sight behind a football mask and hunting and fishing and the things that this world tells us is ‘masculine’ and ‘manly.’”

But he slowly started coming out after the blackmail threat. First to his publicist, then to a small circle. He and Randolph were filming a new reality series together last summer about their friendship in L.A. that was never formally pitched.

It was the restraining order that ended that venture. The production company heard that Underwood was gay and decided they wanted to do a show about him coming out. Underwood said he thought his story would help others, so he agreed and the show was sold to Netflix.

But that show – which will feature “gay guide” Gus Kenworthy – faced stiff criticism. It was announced the same day that he came out on Good Morning America and led to insinuations that he came out just to advance his career. Others said that no one wants to watch another show about a wealthy, muscular, white gay man, and a petition was even spawned to cancel the show because of how Underwood allegedly treated Randolph.

Underwood said that the Netflix show is going to be mindful of his privilege.

Kenworthy has “been somebody that I’ve not only learned so much from, but he’s held me accountable and he’s allowed me to see the privilege of being a straight-presenting gay, white man,” Underwood said. “He pointed out how my path has been, compared to other people.”

About Randolph, he said that he’s limited in what he can say about her by an agreement they signed last year.

“I did not physically touch or physically abuse Cassie in any way, shape, or form,” he said.

“I never want people to think that I’m coming out to change the narrative, or to brush over and not take responsibility for my actions, and now that I have this gay life that I don’t have to address my past as a straight man. Controlling situations to try to grasp at any part of the straight fantasy that I was trying to live out was so wrong.”

Netflix is standing by the show as well.

“One person’s experience will not fill the void of queer stories on TV. We have to do better as an industry to highlight more kinds of lives and love,” said Netflix Vice President Brandon Riegg. “That said, we hope the show will help challenge outdated notions of what kind of stories can or should be at the center of entertainment.”

“Colton has been public about his past and the bad choices he’s made and this will be part of the show, too. While there is tension with providing a platform, we think his complicated story, which includes him taking accountability, is one others can learn from, and we trust Colton and the producers to address it in a thoughtful way.”

Transgender Latina pastor Nicole M. Garcia, who has an inclusive congregation in Colorado, will appear on the show to discuss faith. She said that it’s true the Underwood is “a cisgender white man who comes out as gay, and he gets a show,” but added that she is happy to be “riding on Colton’s coattails.”

“How many times have you interviewed a transgender Latina pastor?” she asked Variety when they interviewed her.

She grew up with MLK and was Kamala Harris’ gym buddy. Meet Donzaleigh Abernathy.