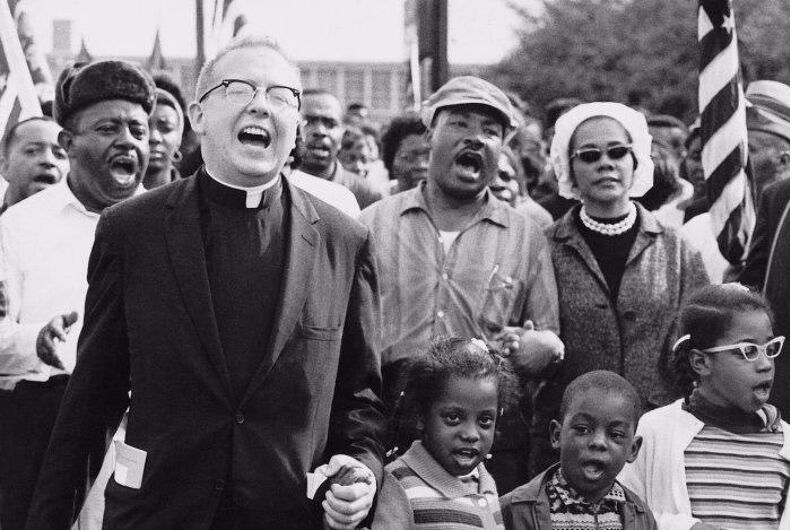 The black and white photo is of the Abernathy Family marching with Martin Luther King and Coretta Scott King on Day 4 of the Selma to Montgomery March for the Right to Vote. Photo: Provided

This is the first article in “We Dream On,” a three-part profile of actress, singer, and civil rights icon Donzaleigh Abernathy. Her parents were close friends with Dr. Martin Luther King, Jr. and his family and they helped guide the civil rights movement. Part two of the series appeared on May 13. Part three appeared on May 14.

Donzaleigh Abernathy will never forget how she felt when her teacher told her she’ll never be an artist. Her reaction was to run out of the classroom and to prove the teacher wrong.

Later, her parents and godparents “brought all the children together,” Donzaleigh told LGBTQ Nation in an exclusive interview, and asked them a simple question: Would they want to integrate a white school?

Related: 6 organizations to donate to in the spirit of Dr. Martin Luther King Jr.

Her childhood was filled with similarly momentous events that called for courage and change because Donzaleigh wasn’t just any child growing up in the midst of the evils of segregation — she was the child of Juanita and Dr. Rev. Ralph A. Abernathy, the closest of all associates to “Uncle Martin,” her godfather, Dr. Rev. Martin Luther King, Jr.

The school she was questioned about integrating was Spring Street Elementary School in Atlanta, Georgia. At that time, in 1965, no other school in the area was integrated.

Donzaleigh, without hesitation, answered yes. Not solely out of a sense of nobility, though. “I was the first child to raise my hand to say, yes, because I thought if I was, I would see Eric every day!”

Eric was their babysitter, the elder child of Walter Grady Roberts, a family friend who taught dramatic arts. Donzaleigh was inspired by Roberts to become an actress and creative spirit in spite of her former teacher’s doubts. She was too young to begin studying under him at that time, but her godsister, Yolanda King, became one of Roberts’ star pupils.

Roberts would later face blacklisting and condemnation for casting teenage Yolanda in a play in which her love interest was white. This was before Loving v. Virginia, the 1968 Supreme Court which overturned bans across the country on interracial marriages.

Donzaleigh saw this episode play out and pledged to act for him one day — but she never got the chance. “He didn’t need me,” she remembers.

Donzaleigh notes of Eric, a Golden Globe-nominated actor in his own right: “I’ve seen him since, and mentioned all of this to him. It just went straight over his head. He has no memory of that. But it’s a memory that I can’t ever get rid of.”

How Far We’ve Made It

If it seems Donzaleigh has crossed paths with a lot of celebrities and world-historical figures, that’s because she’s been at the intersections of American history throughout her life and had her part in making her own.

As a Black woman raised in a place when people of color couldn’t even use adequate bathrooms or stop anywhere they pleased at night in the South, it’s not lost on her how much has changed from her youth — or how much still needs changing.

There are many memories she can’t shake.

She remembers the 1963 rally where Dr. King delivered his “I Have A Dream” speech before the Lincoln Memorial. “And it was momentous….and they retaliated violently,” she said, speaking of the 16th Street Baptist Church in Birmingham, Alabama bombing less than a month after that claimed four lives, in addition to two other murders of Black people that day.

“I would never go to sleep in the vehicle again until I was an adult,” she says while remembering the story of Viola Liuzzo, a white woman shot and killed in 1965 for helping civil rights activists travel on integrated interstate buses. “And I would ride shotgun in the back of the car, watching for my father. My mother would fall asleep, my sister and my brother. But I wouldn’t. I would just be there for my father, you know, who was my hero.”

Donzaleigh stresses, “I watched the world change in my lifetime.”

The Queer Legacy of the Civil Rights Movement

She recalls crossing paths in her adolescence with Bayard Rustin, the gay civil rights leader that introduced the principles of nonviolence to Dr. King and others. She didn’t get an opportunity to talk to him much back then, especially as he would not stay in Alabama or Georgia long before people would complain to Dr. Abernathy and Dr. King that Bayard was “effeminate.”

“Bayard was not ‘effeminate,’ but those were horrible times, and people discriminated. And I hated it, hated it even as a child. I knew it was wrong,” she says hauntingly of the scrutiny he faced over his homosexuality.

Rustin had a “morals” conviction after he was arrested for having sex with a man in a parked car in 1953, cause for a “sexual perversion” charge back then. This misdemeanor charge followed Rustin around for the rest of his life and career. His entire record was read on the floor of the Senate by segregationist Sen. Strom Thurmond prior to the 1963 March on Washington. It was posthumously vacated by a pardon issued by California Gov. Gavin Newsom in 2020.

“That was discrimination against Bayard, and my father did not like that at all,” Donzaleigh remembered. “But that was the time and that was the way it was.”

“But Bayard Rustin’s story is coming out now, which is great. He organized that March on Washington and it was tremendous, and did all the heavy lifting for A. Philip Randolph,” she says of the civil rights leader and official head organizer of the March.

Donzaleigh is certain that her father Ralph, Dr. Martin Luther King, and all the other Black civil rights leaders she knew from her youth would support LGBTQ rights. “I was raised to accept people as they are and how they are,” Donzaleigh told LGBTQ Nation.

Abernathy has been and continues to be, a witness to the best and worst of our history.

But she says it wouldn’t have been possible without the queer people in her life, like Bayard Rustin, but others as well you probably haven’t heard about before. Until now. It’s time to tell stories.

From Sorrow to Success

Today, at 63, Abernathy is an actress and award-winning author living with her husband in Los Angeles, where she took time out of her busy schedule to talk to LGBTQ Nation.

Like any 10-year-old child would be — and as the entire world was — she was irreparably shaped by the sudden assassination of her beloved Uncle Martin.

She vividly remembers turning on the TV for her mother when she heard the news (“My sister started screaming, and she ran… and she called Yolanda, and apparently she already knew…”). Then, they were in the car going to the airport, seeing his body in the casket, kissing the great man and family member goodbye.

“Just like Daddy and uncle Martin were best friends, Yoki [Yolanda] and [Donzaleigh’s sister] Juandalynn were best friends, and I’m there just trying to calm them down, but I’m younger than they are,” she recalls of that terrible day. “I told them that, you know, God doesn’t kill good people. Life isn’t going to take him and we all just need to relax.”

Half a century later, Donzaleigh sighed sadly after telling us about the entire ordeal. “I didn’t understand. I still don’t understand.”

She recalled these events — that to the rest of us seem ever so distant — just as clearly as she recalled a young woman she met more recently in her pre-pandemic exercise class at the gym, “when we were the only two women of color — only two people of color” in that room most times.

The woman would make sure to come up and embrace Donzaleigh every time. “I just love the fact that at the end of exercise class, she would come over to me ‘cause she’s younger than I am, and I’d be sweaty, still trying to clean off my bike, and she’d come over, and give me a hug and a kiss, and then leave.”

That woman is now the Vice President of the United States, Kamala Harris.