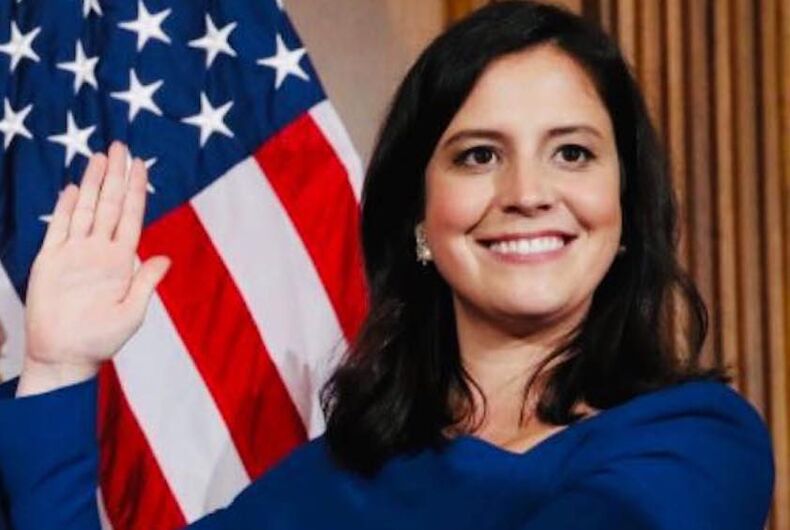 As expected, Rep. Liz Cheney was shown the door as the number three in House leadership by her fellow Republicans today as punishment for refusing to embrace the lie that the 2020 presidential election was stolen. Cheney was defiant even in defeat, declaring that she will do “everything I can to ensure that the former president never again gets near the Oval Office.”

For telling the truth, Cheney was booed by her fellow Republicans.

Washington being the cesspool of ambition that it is, Cheney’s likely successor had been campaigning for the job well before the vote. Rep. Elise Stefanik, from upstate New York, is positioned to take the leadership position later this week.

Stefanik personifies pretty much everything that’s wrong with today’s Republican party, from her complete lack of principle to her relatively newfound loyalty to Donald Trump to her willingness to embrace the former president’s lies.

Stefanik was elected to Congress in 2014 as a moderate Republican when she was just 30. On election night, she was gracious toward her opponents. “Our democratic process is strengthened by those individuals willing to put forth their ideas,” she said.

Stefanik became the face of those in the GOP trying to appeal to millennials and women, groups that the party has had problems attracting. She made bipartisanship a core principle, making her a favorite among Democrats desperate to find sane Republicans with whom to work.

Stefanik certainly seemed the unlikeliest person to get behind Trump, and in fact, was vocally opposed to him during his first presidential run. She blasted  Trump’s boasts about sexual assault on the Access Hollywood tape; the “inappropriate, offensive comments are just wrong.”

Even in Trump’s early days in office, Stefanik was willing to criticize Trump, albeit politely. She called his Muslim ban overly broad, wondered about how realistic Trump’s border wall was, and opposed Trump backing out of the Paris climate change agreement.

Even without Trump as a contrast, Stefanik was more moderate than Cheney. In the last Congress, Stefanik got a 40 percent rating from HRC for her votes on LGBTQ issues, which is a lot better than the zeroes that most of her colleagues, including Cheney, got. (Stefanik was hardly a supporter; in 2016, she unsuccessfully pushed a measure that would have allowed anyone working in federal agencies to discriminate against LGBTQ people by citing religious freedom.)

But at some point, Stefanik must have stuck her finger in the wind and realized that Trump was the party’s future. She abandoned her reasonable Republican persona and instead went full Trump. During Trump’s first impeachment trial, She pointedly fought with Rep. Adam Schiff, then chair of the House Intelligence Committee, in a calculated effort to attract attention.

It worked. Trump called her “a star” and Stefanik raked in tons of money for her 2020 reelection campaign. After that, it only got worse. Stefanik was one of the House members who asked the Supreme Court to reject the results in four states that Joe Biden won. She voted against certifying the 2020 presidential election results, citing “concerns” and “irregularities” in the vote.

But people who know her say she may not even believe the election was stolen from Trump. She has never said directly that the election was rigged, instead, citing “irregularities” and “concerns.”

“I don’t even know if she believes the Big Lie,” Margaret Hoover, who worked with Stefanik in the Bush White House, told Time.  “But she is absolutely responsible for propagating a lie that will undermine our democracy.”

For all her faults–and there were plenty of them–Cheney had the courage to stand up for a fundamental tenet of democracy, faith in free and fair elections. This is not a policy position, like support for an infrastructure bill. Republicans have now embraced the idea that election results are fungible if they don’t like them. That’s how authoritarianism starts.

Stefanik is now all in with lying to the American public about the election, as long as it furthers her own personal goals. That makes her a perfect representative for the Republican party today: amoral, power-hungry, and dangerous.

Laverne Cox will be the new host of E!’s iconic red carpet coverage