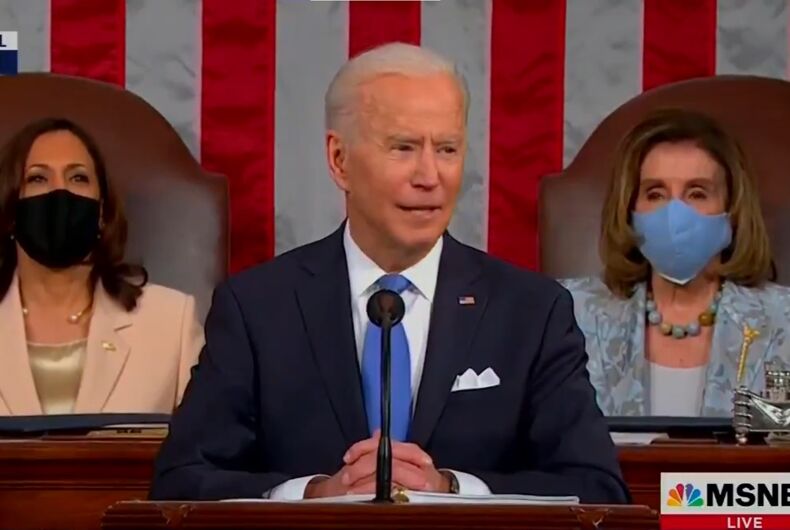 President Joe Biden stood up for transgender rights and called on the Senate to pass the Equality Act in a historic speech before a joint session of Congress.

“I also hope Congress can get to my desk the Equality Act to protect the rights of LGBTQ Americans,” Biden told Congress while discussing major initiatives that are being held up in the Senate.

Then he specifically addressed trans youth: “To all the transgender Americans watching at home — especially the young people who are so brave – I want you to know that your president has your back.”

"To all the transgender Americans watching at home – especially the young people who are so brave – I want you to know that your president has your back." – @POTUS #JointAddress pic.twitter.com/QlF07i4FTq

Biden’s mention of transgender people comes at a time when dozens of states across the country are considering bills to reduce transgender rights, attacking trans youth’s rights to health care and to participate in school sports.

The Biden administration’s position is that these laws are already illegal under federal law, and he signed an executive order stating that Title IX’s ban on discrimination “on the basis of sex” in education bans discrimination against LGBTQ students as well. Civil rights groups say that they are preparing to file federal lawsuits to overturn these state laws.

The Equality Act would add sexual orientation and gender identity to existing federal civil rights legislation, extending anti-discrimination protections to LGBTQ people. The bill passed in the House mostly along party lines and is stalling in the Senate, where Senate rules currently require 60 votes for the bill to proceed and Democrats only control 50 seats.

Signing the bill into law in his first 100 days in office was the Biden-Harris campaign’s main promise to LGBTQ voters, and those voters turned out for him and were necessary for his victory. Today is the 100th day of his presidency, though, and there’s no sign that the Senate will pass the bill in the near future.

LGBTQ organizations praised Biden for renewing the call to pass the Equality Act.

“The fact that President Biden will spotlight the inequalities LGBTQ Americans face every day and call for passage of the Equality Act speaks volumes about how important this legislation is and how much this new Administration is doing to ensure full equality and acceptance,” said GLAAD President and CEO Sarah Kate Ellis. “LGBTQ lives are on the line, and it’s time for the U.S. Senate to take action and send the Equality Act to the president’s desk for his signature.”

His speech was also noteworthy because, for the first time in U.S. history, the leaders of the House and the Senate who sat behind him while he addressed a joint session of Congress were both women.

“No president has ever said those words from this podium, and it’s about time.”

Joe Biden has made a lot of progress on LGBTQ rights in first 100 days. Now the Senate needs to act.