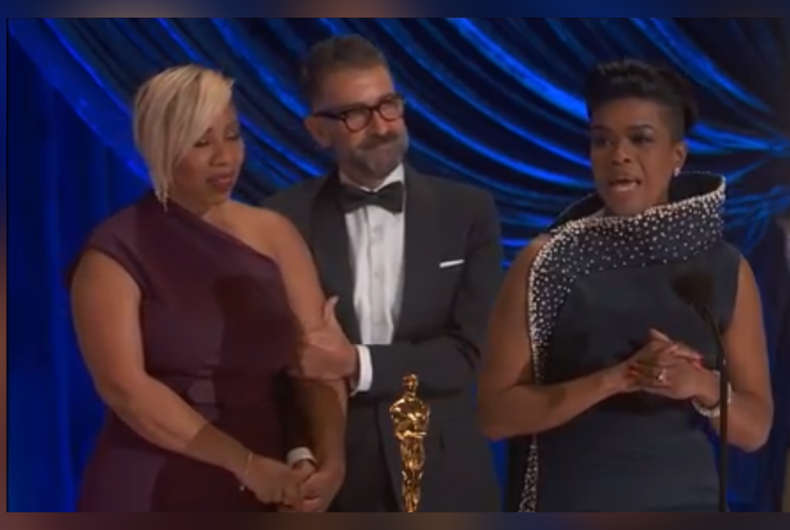 At the 93rd Academy Awards ceremony today, Mia Neal and Jamika Wilson became the first Black women to win an Oscar in the Best Makeup and Hairstyling category. They were awarded for their work on the film Ma Rainey’s Black Bottom, starring Viola Davis and the late Chadwick Boseman, centering on a fictional portrayal of legendary out singer Ma Rainey.

In her acceptance speech, Neal told the small Hollywood audience at the event and the millions watching from home, “I can picture Black trans women standing up here, and Asian sisters, and our Latina sisters, and Indigenous women. And I know that one day it won’t be unusual or groundbreaking, it will just be normal.”

Related: Ellen talks about the night she drove under the influence & Portia ended up in the hospital

Neal shared her family’s struggle with racism in America, and why that gives her hope for other marginalized people to eventually not only break barriers, but make them an issue of the past.

“[My grandfather] was an original Tuskegee Airmen, he represented the US in the first Pan Am games… he graduated from Northwestern University at a time that they did not allow Blacks to stay on campus, so he stayed at the YMCA,” Neal said.

“And after all of his accomplishments he went back to his hometown in hopes of becoming a teacher. But they did not hire Blacks in the school system. So I wanted to say thank you to our ancestors who put the work in, were denied, but never gave up. And I also stand here as Jamika and I break this glass ceiling with so much excitement for the future.”

"I know that one day it won’t be unusual or groundbreaking, it will just be normal,” for Black women, trans women, Latinas, to be claiming Oscars, says Mia Neal.

"I can picture Black trans women standing up here.

And our Latina sisters.

And I know that one day it won't be unusual or groundbreaking.

It will just be normal."

Neal’s comments highlighting the barriers Black trans women face was just one of several moments where LGBTQ people were honored, recognized, and remembered at the Oscars, despite a limited number of openly LGBTQ awardees and nominees.

Wearing a custom tuxedo with the name of Black victims of police brutality in the United States, Free said in his acceptance speech, “James Baldwin once said, ‘The most despicable thing a person can be is indifferent to other people’s pain’ …Please, don’t be indifferent to our pain.”

Free is also the first Black person to win in the live action short film category.

Travon Free, wearing a jacket that includes names of Eric Garner, Tamir Rice and more: “James Baldwin once said, ‘The most despicable thing a person can be is indifferent to other people’s pain’…Please, don’t be indifferent to our pain.” https://t.co/sdgeoBK7lX #Oscars pic.twitter.com/Klu1aYxUwa

“Don’t be indifferent to our pain.” @Travon talked on the #Oscars stage about police brutality, and specifically how it disproportionately impacts Black people in the United States.

So happy for my friend @Travon and everyone who helped create and bring #TwoDistantStrangers to life. I was proud to show this powerful film to the Congressional Black Caucus in February. #Oscars https://t.co/kn0xvLWy6p

Travon Free is the first Black winner ever in the Live Action Short category. https://t.co/lmlK8Jzd02

Jan Pascale won the Academy Award for Best Production Design for her work on the film Mank. She accepted the award by thanking her wife, Louise, “who inspires me every day.”

Pascale was also nominated in the same category in 2006 for Good Night, and Good Luck.

"There were so many people that helped me along the way and guided me…and especially to my wife, Louise, who inspires me every day."

Still, the only film with LGBTQ characters or talent that took home a trophy was Ma Rainey’s Black Bottom, which also earned an Oscar for costume design by Ann Roth.

The United States Vs. Billie Holiday, focused on the titular character played by Andra Day, was shut out.

On the red carpet prior to the ceremony, out star Colman Domingo stole the show. Andra Day and Viola Davis, playing out bisexual women in Oscar-nominated films this year, also stunned the cameras.

The cast of Queer Eye also surprised their castmate Karamo Brown, who was working as a red carpet correspondent for E! News. A new season of the show was just announced.

Editor’s note: A previous version of this article incorrectly stated that Jan Pascale won the Academy Award for Best Production Design in 2006. She was nominated but she did not win that year. We regret the error.