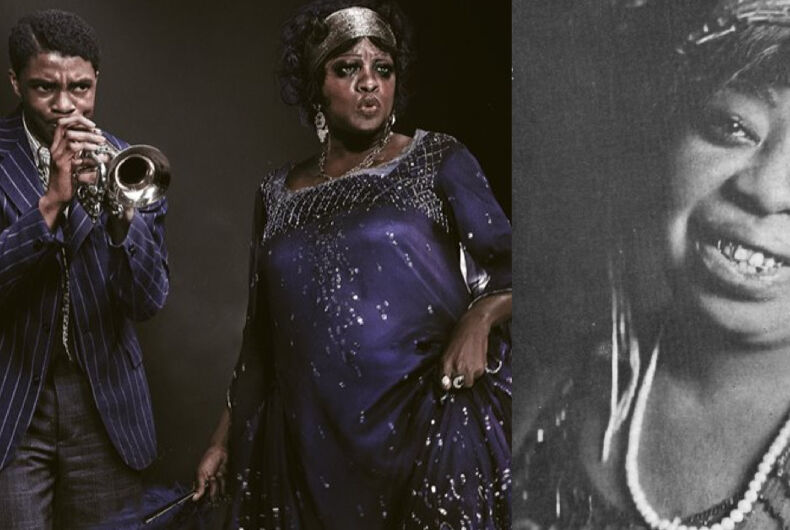 The film Ma Rainey’s Black Bottom has begun streaming on Netflix after a brief and very limited theatrical release. It is based on the August Wilson play of the same name that first came to Broadway in 1984. The film stars two of the most acclaimed entertainers of our time: Viola Davis and the late Chadwick Boseman, in what unfortunately becomes his final role on film.

After watching it, I came across an online comment from someone who had yet to see it. They asked someone posting about the film, “Ma Rainey is a real person?” — to which, the answer is yes.

Related: The Harlem Renaissance was as Queer as it was Black

While it is based off of a fictional play, the titular character was an actual person. Not only that, but Ma Rainey — played by Davis — was, as depicted in the film, known to have relationships with women.

I know this personally from researching Wilson’s other work and learning about Ma Rainey’s Black Bottom. But, as unfortunate as it is, it makes sense that the average person may not realize that there was an actual person known as Ma Rainey. After all, all of Wilson’s other plays were fictional, and this one is, too.

Also, Wilson’s work is revered in the African-American community for its reflection of our experiences. But despite his accolades, it is not commonplace for most of his work to be studied in schools or even theater departments, and inclusion of his complex work in curriculum for non-African American students has been controversial.

Most of all, erasure of Ma Rainey’s place in history as “Mother of the Blues” was expected. In fact, it’s part of the reason why Wilson wrote the play about her.

The real Ma Rainey came of age in Columbus, Georgia at the turn of the 20th century. She was born Gertrude Pridgett and gained her infamous stage name from marrying Will “Pa” Rainey. Together, the two would rise to prominence perform at minstrel shows, a form of vaudeville acts. Ma Rainey’s shows were typically performed by Black people, but the minstrel shows in those times popularized the use of white performers in blackface, in stereotypical caricatures of African-American people.

By the Roaring 20s, Ma Rainey’s voice became an attraction of its own across the pre-Great Migration South. She became a star and “one of the first black divas in history,” as historian Robert Phillipson wrote. Toward the end of the decade, she was in her 40s, separated from her husband, and would even run into legal troubles — but her tours still ruled the south.

Soon, though, Ma Rainey’s popularity would wane as recordings and radio were coming into prominence and live performances were no longer the only way to hear music. Additionally, the Great Migration and Harlem Renaissance sent most of her fan-base north to urban settings, where her style of performance wasn’t as fashionable. The fictional play, and subsequently the film, centers on this period.

Contrary to some assumptions I’ve read, Ma Rainey’s Black Bottom is not a biopic. The story takes place over a day at a recording session for Ma Rainey in Chicago, but the plot focuses more on the fictional members of Ma Rainey’s band, namely her ambitious, scheming trumpet player, Levee Green — played by Boseman. It’s Wilson’s only play in his acclaimed “Pittsburgh Cycle” not to take place primarily in Pittsburgh, although the themes were reminiscent of his other works, namely the Pulitzer Prize and Tony Award-winning plays Fences and The Piano Lesson.

Ma Rainey is central to the story, but serves more as an adversary to every other character rather than a protagonist. She foils their hopes and desires, because her commands are supreme and final.

In the film, Davis as Ma Rainey stated, “they don’t care nothing about me. All they want is my voice.” She predicts, “as soon as they get my voice down on them recording machines, then it’s just like if I’d be some whore and they roll over and put their pants on. Ain’t got no use for me then. I know what I’m talking about. You watch.”

That is based on the actual course of events. She had recorded the hit songs “Bo Weavil Blues,” “Moonshine Blues,” and yes, “Ma Rainey’s Black Bottom,” which was about a popular dance arising from New Orleans, typically performed to a song referring to the one-time Black neighborhood Black Bottom in Detroit in the 1920s.

But by 1929, Ma Rainey would be dropped by Paramount because they felt that her style was out of favor, and they turned in a direction to instead record newer Blues singers, namely Bessie Smith, who had performed with Ma Rainey for years and was rumored to have a romantic relationship with. In fact, in the 2013 biopic Bessie, Ma Rainey is played by Oscar Award-winning actress Mo’Nique.

In a decade, white performers would become the favored talent used for recording blues music. White entertainers like Spike Jones and Judy Garland would later popularize appropriated versions of the dance-and-song Black Bottom routine in the 1940s and 1950s.

In Davis’ eyes, Ma Rainey was not an outlier, but just a prime example of proud, out Black women that ruled the early 20th century. “My mom tells me a lot of stories about my relatives down South, in the country, there was a lot of bisexuality, homosexuality going on… unapologetically,” Davis said in an interview with Queerty. “I think with Ma, with her unapologetic nature… I don’t think that she felt like she had a choice. I feel like either she lived authentically, and she was who she was, or she was in the grave. She would have absolutely epitomizes the person our culture spits out.”

“By the way, a lot of those women were bisexual or lesbian,” Davis adds.

As Gabrielle Noel wrote for LGBTQ Nation earlier this year about those that influenced the Harlem Renaissance: “Blues performers ignored traditional ideas around being proper or feminine. Popular blues singers like Bessie Smith, Ma Rainey, Gladys Bentley, and Ethel Waters were all lesbian or bisexual, and many of them were open about it.”

After her recording career ended, Rainey enjoyed almost ten more years of touring across the South, even as the Great Depression ravaged America. She died of a heart attack in her 50s in 1938, shortly after retiring.

More of Ma Rainey’s legacy and life is explored in the post-feature short Ma Rainey’s Black Bottom: A Legacy Brought to Screen, a 30-minute documentary now available after watching the film on Netflix. It features narration from star Glynn Turman and commentary from Davis, out cast member Colman Domingo, Director George C. Wolfe, producer Denzel Washington, and others about the making of the film and why telling the story and bringing Ma Rainey to life again was important.

Wolfe notes that when researching her for the film, he could only find seven known photographs, compared to the hundreds of Smith that exist. Because the entertainment industry shunned her once audio recordings and video came into prominence, her legacy faded in favor of more well-documented stars, such as Smith and Waters.

So did her open rejection of gender roles and lesbianism or bisexuality.

A trans woman’s grandmother thanks Elliot Page for helping them by coming out: “I am proud”