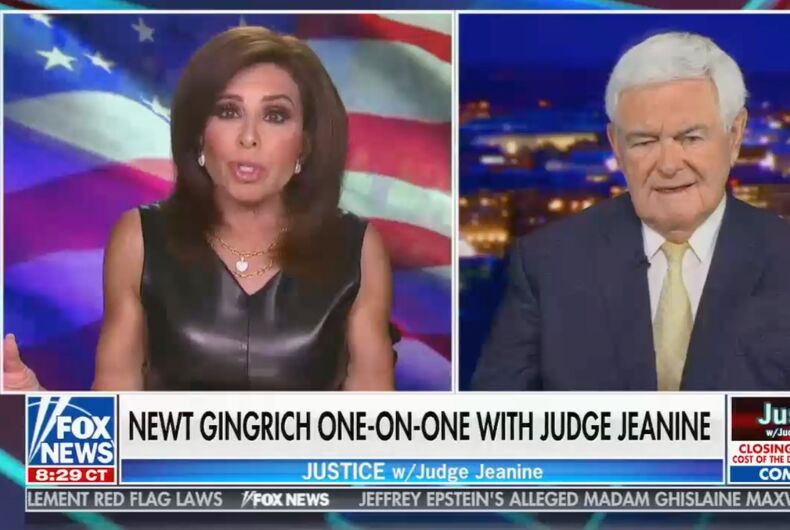 Republicans are lashing out after the Biden administration announced it will allow embassies to fly the Pride flag again. Former President Donald Trump required special permission from the State Department to fly the flag; there was no guarantee it would be given and the administration even forced some embassies to take theirs down.

But religious right and Republican leaders are “appalled” that Secretary of State Antony Blinken announced that the foreign outposts could simply do it without jumping through hoops meant to discourage the practice.

“Every idiotic thing that the Biden administration has done in the first 100 days, you begin to realize — whether it’s threatening everybody who believes in the Second Amendment or it’s attacking everybody who believes in right to life or it is attacking people of traditional values who are appalled that this administration would fly the gay flag at American embassies all over the world,” Gingrich fumed.

“I mean, you just go down item by item and it’s almost like they have a checklist of ‘What can we do that will really, truly, infuriate traditional Americans?’ And I’ve never seen anything like it. I couldn’t imagine any administration which had been this deliberately anti-American and it’s deliberately committed to infuriating the majority of the American people.”

“Just because something is ‘authorized,’ that doesn’t make it right!” Graham thundered on social media. “Why should a flag representing one group of people and a specific agenda be literally raised up above all others and allowed to fly at our embassies and consulates?”

“The embassies represent the United States of America on foreign soil — only the U.S. flag should be flown.”

“Look, I think that the left has decided they’re going to try to push all the regular Americans into a corner where they either have to fight, in which case they’ll be attacked by the news media, or they have to just cave and hide,” Gingrich said.

American embassies flew Pride flags in June under the Obama administration. Trump rescinded the policy as part of his administration’s ongoing war on the LGBTQ community.

Former Speaker of The House @newtgingrich joined ‘Justice’ to discuss the latest power grab by the left. pic.twitter.com/YLH8KLPlCx