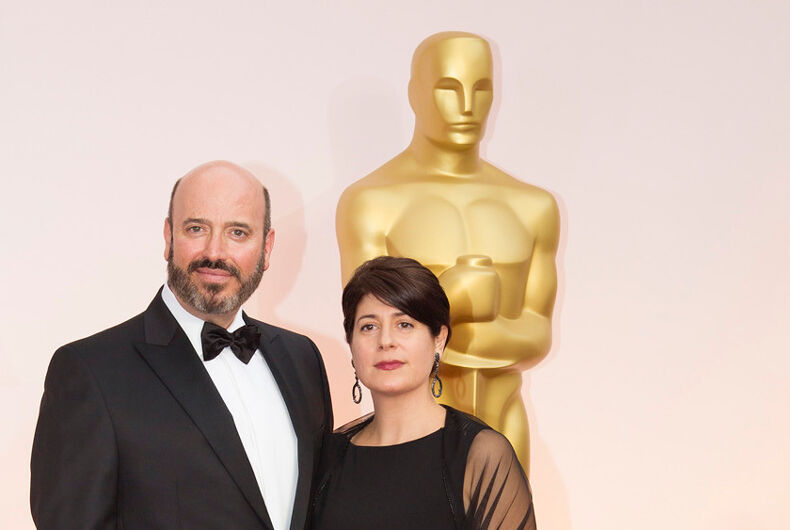 Scott Rudin and a guest at the 2015 Oscars ceremonyPhoto: ABC

The fall of Hollywood and Broadway producer Scott Rudin is remarkable. The winner of an Oscar, an Emmy, a Grammy and 17 Tony awards, Rudin has been a formidable force in entertainment for decades.

Everyone just about knows now he’s an absolute monster, which was literally the headline on the Hollywood Reporter story that broke the silence about Rudin. What everyone doesn’t know is that Rudin is gay, and it became remarkably clear that he treated gay or male assistants better than his woman assistants.

Related: Why does Kevin Hart still get to act as one of Hollywood’s top leading men?

Rudin’s fall follows the pattern of other powerful men accused of bad behavior, with some notable exceptions. People continue to work with the tyrant out of fear, hopes of furthering their careers or willful ignorance. Suddenly, the atmosphere changes, and a torrent of stories burst forth, and all the power the tyrant once held vanishes overnight.

What differentiates Rudin from Harvey Weinstein or Kevin Spacey is that Rudin has not been accused of sexual assault. He’s accused of physical assault, including throwing objects at his assistants and, in one case, smashing a computer monitor on an assistant’s hand, necessitating a visit to the emergency room.

His assistants worked endless hours, suffering so much stress that they developed physical symptoms. Some found the experience so traumatizing that they left the industry altogether.

In subsequent stories in The New York Times and New York Magazine, other assistants reported (mostly anonymously, out of fear of being sued) their nightmarish ordeals where Rudin verbally abused them, broke china in the office during his frequent fits of anger, or fired assistants at random. In one case, he forced an assistant out of his car on the highway, leaving him stranded on the shoulder.

What you would not know from any of these stories is that Rudin is gay.

None of the three major takeouts about Rudin’s abusive behavior mentions, or even acknowledges, that he is one of the most powerful out men in the entertainment industry. If you knew about Rudin before, you’d certainly be aware of that fact. Some of the stories assistants tell allude to it indirectly, so the suggestion is there — but for other readers who aren’t following the industry that closely, it’s a notable omission.

It’s not as if Rudin sexuality didn’t play a role in his abusive behavior. By several assistants’ accounts, Rudin was much less terrible to young gay men in his employ.

The flip side of Rudin treating gay assistants better was the unbridled sexism with which he apparently treated female assistants.

“I had a fairly decent relationship with him,” one assistant told New York Magazine. “I’m gay, and I think he took a liking to me in part for that reason.”

“One of the first things any of the other interns told me was that it would be way easier for me because I was a pretty gay person and not a woman, and especially not a woman of color,” another assistant recounted.

Woman after woman recounts how Rudin demeaned them, forced them to do menial chores, and generally discounted their work, while hurling personal and hateful epithets at them.

One assistant recounted how Rudin was forever telling her that her work wasn’t up to the same level as the man who preceded her in the job.

“So one time I had the man who was in the position before me do my job, because I was getting a little desperate and I didn’t know what I was doing wrong,” she recalled. ‘I still got a response that said, ‘This isn’t as good as the man who had the job before you does it.’”

No doubt more stories about Rudin’s behavior will come to light. Rudin has followed the pattern of stepping aside while saying he is “profoundly sorry” for his behavior. In the meantime, his story may prompt other examinations about toxic workplace in the entertainment industry.

It should also prompt an examination about sexism and misogyny among some gay men. But first, the media would need to be willing to report upfront that the subject of an investigation is gay.