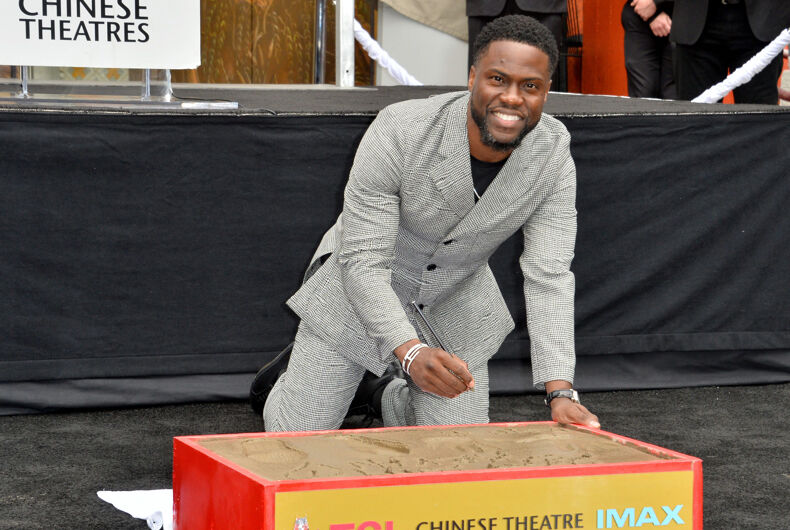 Kevin Hart at his handprint & footprint ceremony at the TCL Chinese Theatre on December 10, 2019.Photo: Featureflash/Shutterstock

I was scrolling through my Twitter feed the other day when I saw the trending new stories at that moment. Among them I came across the headline, “Kevin Hart Joins Cate Blanchett In Borderlands.” Curious to learn more, I clicked on the collection of tweets and learned that the actor was being cast opposite one of Hollywood’s biggest stars in a film adaptation of a popular video game.

I wondered what had changed since 2018, when Kevin resigned from hosting the Oscars due to his refusal to apologize for previous “jokes” he had made — where he, among other offensive things, said that his kid being gay was “one of his biggest fears,” condoned physical abuse by parents against their gay children, and joked about how fellow actor Damien Dante Wayans’ Twitter profile picture “looked like a gay billboard for AIDS”?

Related: Is calling someone a “chicken” as bad as using an anti-LGBTQ slur? PETA says it is.

When he was confronted about his previous statements at the time, he was defiant. While he said he “wouldn’t tell that joke today, because when I said it, the times weren’t as sensitive as they are now,” he made sure to blame the public for being outraged at his inflammatory remarks: “I think we love to make big deals out of things that aren’t necessarily big deals, because we can. These things become public spectacles. So why set yourself up for failure?”

Notice that he didn’t actually apologize for what he said, he just repeatedly said that he wouldn’t tell the same joke again because it created a backlash. He actually still believed what he said.

Instead, he referred to an apology that he supposedly had made years prior, but when journalists tried to find it, was nowhere to be found. He was so defiant in his refusal to apologize that he lost what would’ve been the biggest job of his career. All they asked for was a simple statement of contrition, but he was unable, or unwilling, to give it to them.

Absolutely nothing has changed since then. In the first major incident of “cancel culture,” Hart whined and weaseled his way out of responsibility for those remarks that went beyond even the “casual” homophobia society has grown accustomed to.

Since 2018, Hart has been able to take advantage of the publicity from the situation and undertake a stealth PR campaign to rehabilitate his reputation, inexplicably with the help of other celebrities who have defended him and his inexcusable behavior (even LGBTQ celebrities, such as Ellen DeGeneres), all to protect their friends and peers (or themselves) from the dangerous precedence of being held accountable for their actions.

Hart’s now back to getting big roles and doing big interviews, many without any mention or acknowledgement of the Oscars debacle in 2018, or the inflammatory statements before that.

I’m not normally in favor of “cancelling” people. In fact, I think in many instances, “cancel culture” and the outrage around certain things has gone a little bit too far. Take, for example, the case of golf world champion Justin Thomas, who recently uttered a homophobic slur to himself, under his breath, apparently unaware that anyone else could hear, while missing a shot at a tournament.

Thomas apologized immediately, and owned his mistake. Nevertheless, he lost his contract with his main sponsor, Ralph Lauren. Yet, Kevin Hart continues to get leeway and support from his peers in the entertainment industry, despite showing nothing close to the kind of remorse that Thomas showed.

There are clear and glaring double standards and inconsistencies in our society that need to be examined and addressed. It seems too late now anyway, but until Kevin Hart takes full responsibility for his reckless and bigoted statements, we should renounce and reject him at every gig he gets or role he takes. Period.

The insurrection-loving members of Congress also have anti-LGBTQ histories