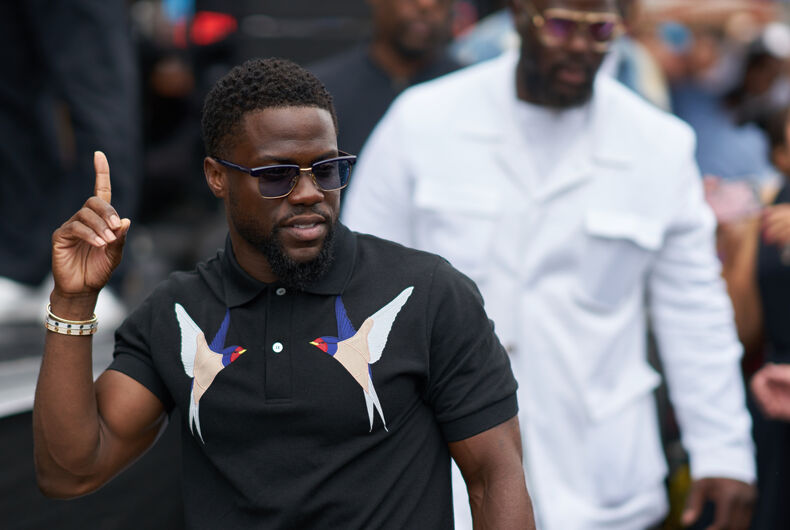 Kevin Hart issued another half-hearted apology on his radio show for his homophobic tweets. This time he did it in the third person.

Hart said that his words were “chopped up” in previous apologies on his Sirius XM show Straight from the Hart.

“I will say this, and I want to make this very clear,” he said. “Once again, Kevin Hart apologizes for his remarks that hurt members of the LGBTQ community. I apologize.”

Hart was announced to host the Oscars last month, but homophobic tweets surfaced after that announcement. In one tweet, he said he would hurt his son if he turned out to be gay: “Yo if my son comes home & try’s 2 play with my daughters doll house I’m going 2 break it over his head & say n my voice stop that’s gay.”

In others, he used the words “fag” and “gay” pejoratively, referring to actor Dwayne L. Brown as a “fat fag” and actor Damien Wayans as “a gay bill board for AIDS.”

As part of his apology on his show yesterday, Hart quoted a homophobic joke from his routine in 2010: “I want to say that I have no problem with gay people. I don’t have a homophobic bone in my body. I want you to be happy, be gay, be happy.”

“And then I say as a heterosexual male, if I can do something to stop my son … that’s where the joke starts!” he said, explaining the 2010 joke.

He went on to explain why he sent those tweets, which have since been deleted.

“These weren’t words that I said to gay individuals,” Hart said. “I didn’t say these words to people, at the time, this was our dumb asses on Twitter going back and forth with each other. We thought it was okay to talk like that, because that’s how we talked to one another. In that, you go, fuck! This is wrong now.”

He said that he acknowledges the hurt that those words caused now that he has gotten to know LGBTQ people. He did not name any of those people.

“Now we’re in a space where I’m around people of the LGBTQ community, and I’m now aware of how these words make them feel, and why they say, ‘That shit hurt because of what I’ve been through.’”

Now he’s asking that people “erase” those past comments and said that LGBTQ people have to “accept people for their change.”

“But in the fight for equality, that means that there has to be an acceptance for change. If you don’t want to accept people for their change, then where are you trying to get to the equal part? Where does the equality part come in?”

Hart claimed in December that he was told to apologize for his homophobic statements or step down as the host of the Oscars, and he chose to step down. He issued an apology after that.

But any goodwill that created was squashed last week when he appeared on The Ellen Degeneres Show and attacked the people who he said were out to “destroy” him. Ellen referred to critics of his homophobic statements as “haters” and told him to ignore them.

No one has been announced to replace Hart as host of the Oscars.