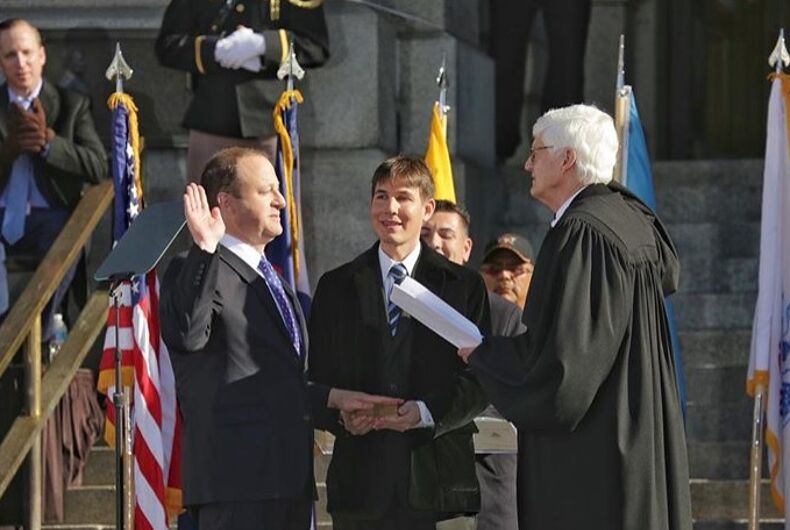 Polis was sworn in yesterday as the governor of Colorado, standing next to his partner Marlon Reis – Colorado’s first “first gentleman” – and their two children.

“I am very conscious of the fact that there were many brave people over the years who made it possible for someone like me to be standing here giving a speech like this,” he said in his inauguration address.

“I am grateful and forever indebted to those who came before me — who struggled for equal rights, who stepped up for public service in all its forms, who made difficult sacrifices and worked faithfully toward a brighter future for our state, our nation, and our world.”

A quick selfie as I become Governor pic.twitter.com/Kb7vtoYurl

The @Capstone__Group had an amazing time tonight celebrating the inauguration of @GovofCO Jared Polis with clients, colleagues, and friends at the Blue Sneakers Ball! #coleg #copolitics #Coloradoforall pic.twitter.com/FUCt0CFqsc

Related: Out congressman Jared Polis’ letter to his 3 year-old daughter is everything today

The moment was celebrated by LGBTQ people.

LGBTQ activist Corky Blankenship said that he was almost cried because he was overwhelmed with happiness.

“This is a moment in history,” said Joschua Beres, a gay teacher who attended the inauguration. “This is Colorado getting to set an example for the entire country that someone who is gay and Jewish can be governor of a state as great as ours.”

GLAAD tweeted that the moment made history.

“This is a moment in history” @jaredpolis will make history when he's sworn in as governor of Colorado today. https://t.co/rUJkXwKGCN

I am watching a monumental moment in Colorado. Gov.Elect Jared Polis is being sworn in as the first openly Gay Governor of Colorado. I am so proud to be performing at the party this evening. Here’s to a great new year! Xx

Fans were excited to post pictures and video of Lauper and Polis to social media.

In 2004, New Jersey governor Jim McGreevey became America’s first gay governor. He was outed while in office; one of his political appointees threatened to file a sexual harassment suit against McGreevey and the governor came out as “a gay American.” He said that his affair with the appointee was consensual.

In 2015, Kate Brown became the governor of Oregon when her predecessor resigned, and she won her elections in 2016 and 2018. She was America’s first bisexual governor and the first elected LGBTQ governor in the country.

Polis won on a campaign that focused on education and transportation, and his inaugural address decried “divisive politics.”