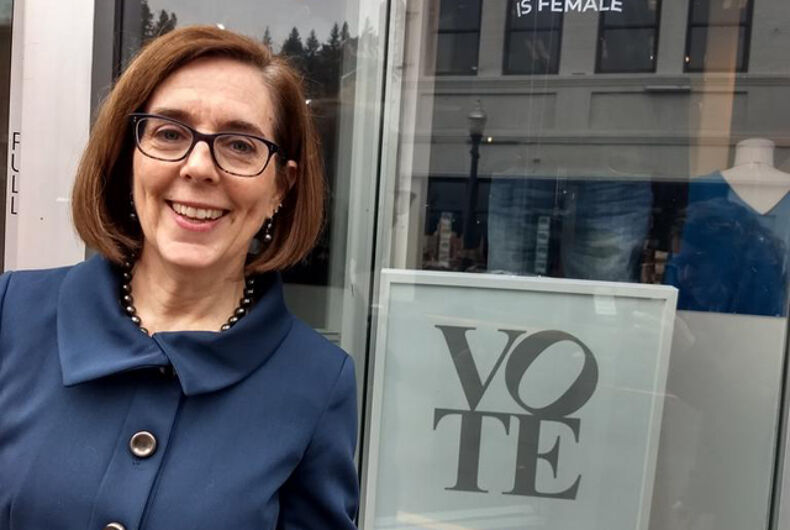 Brown initially became the governor of Oregon in 2015 after John Kitzhaber resigned his office. She is the first openly bisexual governor in the United States and only the second female governor elected in the state.

This will be Brown’s third term, and her second successful campaign for Governor. President Obama endorsed her in 2016 and was his only gubernatorial endorsement that year.

She has been largely successful as Oregon governor, extending a moratorium on executions and signing a “motor voter” law that automatically registered Oregonian drivers to vote.

Brown has been very critical of the Trump administration, including issuing an executive order that Oregon would not participate in the President’s ban on Muslims or any future registry of Muslims.

She also has moved to block offshore drilling and add pre-Trump federal air and water rules to Oregon state law.

Her opponent, Knute Buehler, is a member of the Oregon House of Representatives, serving in the 54th district. He attempted to run on a moderate Republic platform, hoping to persuade centrist Oregon voters.

Patrick Starnes, the Independent Party candidate, dropped out of the race at the end of October and asked his supporters to back Brown.

Polls close in one hour! Make sure to place your vote by 8pm tonight. Remember, your vote is your voice and every voice matters. https://t.co/N7XPs7GkzN #TeamKate #OregonVotes #orpol pic.twitter.com/6sYmNBSpBu