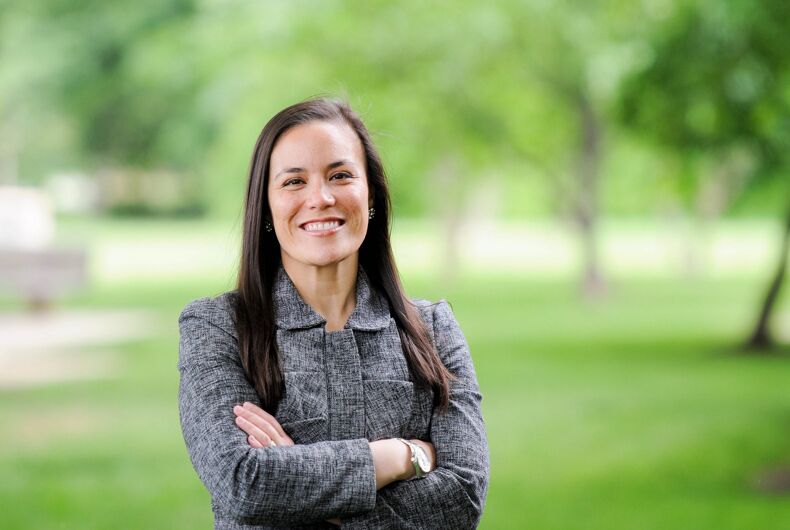 If confirmed by the Senate, Jones will become the first woman of color to hold this position.

“We are incredibly pleased to see President Biden select Gina Ortiz Jones, a proud and accomplished member of our community, to serve as Under Secretary of the Air Force,” they said.

“Throughout her life, Gina has bravely served our nation, both as a member of the United States Air Force and as an intelligence officer. Simply put, Gina is uniquely qualified for this role and we urge the Senate to quickly confirm her to this critical post. We look forward to working with future Under Secretary Ortiz Jones and the Biden Administration to create a more inclusive military for all.”

Jones ran for Congress in both 2018 and 2020, narrowly losing both times in an effort to represent Texas’s 23rd district, a mostly rural area that encompasses parts of San Antonio, along with 800 miles of U.S./Mexico border communities.

A first generation American, she grew up in San Antonio and her mother is from the Philippines. She raised Jones and her sister as a single mother. They lived in subsidized housing and relied on reduced lunch programs.

In an interview with LGBTQ Nation last year, Jones emphasized that these programs were not handouts for her family, but rather critical investments in their future.

From deploying to Iraq to working hard for Texas families, @GinaOrtizJones' life of public service has consistently reflected the best of San Antonio.

Jones also served under the military’s Don’t Ask Don’t Tell policy. In the Air Force, she served as an intelligence officer. She has spent almost fifteen years working in national security, including serving as the Director for Investment at the Office of the U.S. Trade Representative under President Barack Obama.

“I’ve seen firsthand the importance of American leadership,” she told LGBTQ Nation last year. “I know how important our example is in so many ways, and frankly as we as a country are grappling with the effects of the coronavirus, it’s also a reminder of the importance of electing good, competent people that can lead in times of crisis and not cause them or exacerbate them.”

In a statement, Jennifer Dane, executive director of the Modern Military Association of America, an LGBTQ advocacy organization for military members and veterans, said that Jones “represents diverse intersections of minority groups and her visibility at the top echelons of leadership is exactly what our communities need. …She knows firsthand what damaging effects discriminatory policies like ‘Don’t Ask, Don’t Tell’ have on the health and wellbeing of the force.”

Chair of the House Armed Services Committee Rep. Adam Smith (D-WA) also praised the nomination in a statement, saying that Jones has “served her country both in and out of uniform” and that “the Biden-Harris administration continues to prove their commitment to building a diverse Department of Defense that reflects the American population.”

Jones’ nomination comes after Biden also nominated two other LGBTQ people to high ranking positions in the Department of Defense.