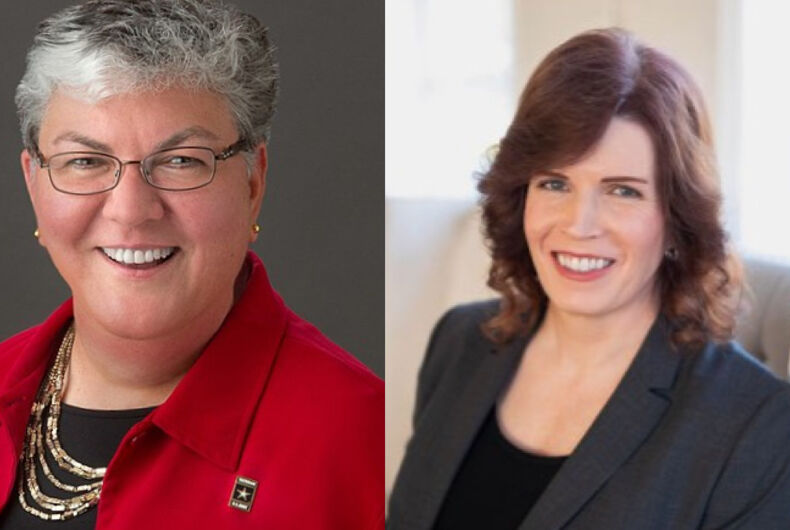 Sue Fulton (left) and Shawn Skelly (right) are expected to be sent to the Pentagon in Biden's latest appointments.Photo: NJ.gov/Out in National Security

The White House is planning to nominate a lesbian woman and a trans woman, who are both veterans, to senior positions in the Department of Defense.

Brenda Sue Fulton, an out lesbian, is currently the chief administrator of the New Jersey Motor Vehicle Commission under Gov. Phil Murphy (D). A 1980 graduate of the West Point Academy, she was one of the first women to attend the military school, and would go on to obtain the rank of captain in the United States Army before her honorable discharge in 1986.

She advocated against the military ban on openly gay and lesbian servicemembers, followed by “don’t ask, don’t tell,” and the Trump administration’s ban on trans people in the military.

Fulton served as the chairperson on the United States Military Academy Board of Visitors, following her appointment to the board by President Barack Obama in 2011. On December 1, 2012, she married Penny Gnesin, her partner of 17 years, at the West Point Cadet Chapel, the first out women to do so. Penny passed away in 2019.

She founded KnightsOut, an organization for out West Point graduates. She also co-founded and is President emeritus of SPART*A, an advocacy group for trans military veterans, and was a founding board member of the LGBTQ veteran advocacy coalition OutServe-SLDN.

“Her combination of military service, private sector experience, and government leadership, as well as her strong advocacy for women, people of color and the LGBTQ community should make us all proud and hopeful for a more equitable, diverse and effective military for those that choose to serve,” Renna said.

Shawn Skelly is a retired Navy Lieutenant Commander and former Director of the Executive Secretariat in the Department of Transportation under the Obama administration. She also was a former special assistant to the Undersecretary of Defense for Acquisition, Technology, and Logistics. She was the first trans veteran to get a presidential appointment.

After serving in the Department of Transportation, Skelly was appointed to the National Commission on Military, National, and Public Service — which reviewed and considered changes to the Selective Service agency — at the end of Obama’s last term.

She served in the United States Navy for 20 years and earned a master’s degree from the U.S. Naval College. She is a co-founder of the non-profit affinity group Out in National Security and works at national security technology company CACI International. In November, she was named as a member of then President-elect Biden’s Defense Department transition team.

If confirmed, Skelly would be the highest ranking openly transgender person in the Pentagon, the Washington Post reports.

Her fellow Out in National Security co-founder, Luke Scheusener, said in a statement, “Shawn is first and foremost a public servant. She has dedicated her life to serving the United States in and out of uniform. That extends to her decision to co-found and President of ONS. She has been a stalwart advocate for our community and for LGBTQIA+ national security professionals.”

“Representation matters. Congratulations to both Shawn Skelly and Brenda Sue Fulton on their historic appointments,” the Human Rights Campaign wrote in a tweet.

A White House press official shared the news first to the Advocate.

#oralhistory #Quarantine Video! Sue Fulton, USMA '80, was in the first class including women at West Point. During her time as a Cadet, she experienced sexual harassment. This interview was part of a Cadet's senior thesis in history. #SAAM #SAAPM Watch: https://t.co/XVppIIxmWO pic.twitter.com/bQpZG5Dedu

Because of the action President Biden took today, Shawn Skelly and countless other transgender service members will be able to serve our nation openly and free from discrimination. pic.twitter.com/miSHxQrbXK

Additionally, @ShawnGSkelly, who has broken so many barriers already, has been nominated for Asst. Secretary of Defense for Readiness. She will be highest ranking open-trans person in the history of the Defense Department. Go Shawn!!!