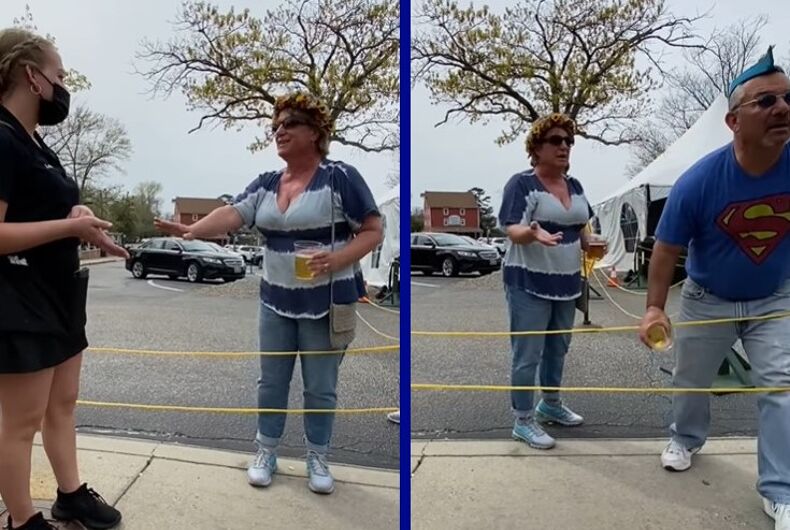 A middle school in New Jersey is investigating its vice principal after he was caught throwing beer at people at a restaurant while his wife went on a transphobic rant this past Saturday.

“I do not condone violence or discrimination of any kind and should have simply walked away,” Michael Smurro of Neptune Middle School in Monmouth County said in a statement yesterday. “I apologize to the person I threw my beer at and wish I hadn’t done so. I apologize to anyone I offended.”

Video recorded by other patrons show Michael Smurro and his wife Lisa Smurro at the outside seating area of Fred & Ethel’s Lantern Light Restaurant and Tavern in New Jersey’s Galloway Township as Lisa Smurro ranted loudly about a transgender woman who used the bathroom, according to BreakingAC.

At this point, the Smurros realize that someone at a different table is recording them. They get up to confront that person, while Lisa Smurro continues to rant about the trans woman.

“Please take your hate elsewhere,” the patron who is recording them said.

Michael Smurro then threw his beer on the woman.

“She’s a man in the woman’s restroom,” Lisa Smurro continues to rant. “That’s not OK.”

“Get the fuck outta here, ya homophobic pieces of shit,” another patron shouts at them.

While someone shouted to call the police, Galloway police said that no one reported the incident.

“We didn’t bother anyone,” Lisa Smurro said afterward. “This all began because somebody was in a bathroom that they shouldn’t have been in.”

But the woman who recorded the video – who didn’t want to be identified – said that Lisa Smurro wasn’t having a private conversation.

“She literally just started going off, loud as hell, without cause,” she said.

But in his later statement, Michael Smurro was contrite.

“I allowed my emotions to get in the way of my normally sound judgement and reacted in a way that was inappropriate,” he said.

In a statement, the Neptune School District said that it was investigating the incident.

“This event is troubling as its perception potentially threatens the social-emotional well-being and climate of belonging that our Neptune School District community represents,” the statement says. “The actions shown in the video do not reflect our district’s commitment to inclusivity, cooperation, respect, and non-violence.”

“The Board of Education and Superintendent will respond to this incident in a manner that is appropriate and relative to the seriousness of the situation and that takes into consideration the impact this incident has had on the reputation of our wonderful district.”

Restaurant owner Tony Coppola said that people at his restaurant can use the bathroom they feel most comfortable in.

“Everyone’s welcome in our restaurant,” he said. “Hate’s got no place in our society. There’s too much hate right now.”

The identity of the trans woman is not known. No one involved in the incident even saw this person besides Lisa Smurro, and she still insisted to reporters after the incident that she is convinced the person is trans because “their feet were facing the totally wrong direction” and she “was clearly a man.”