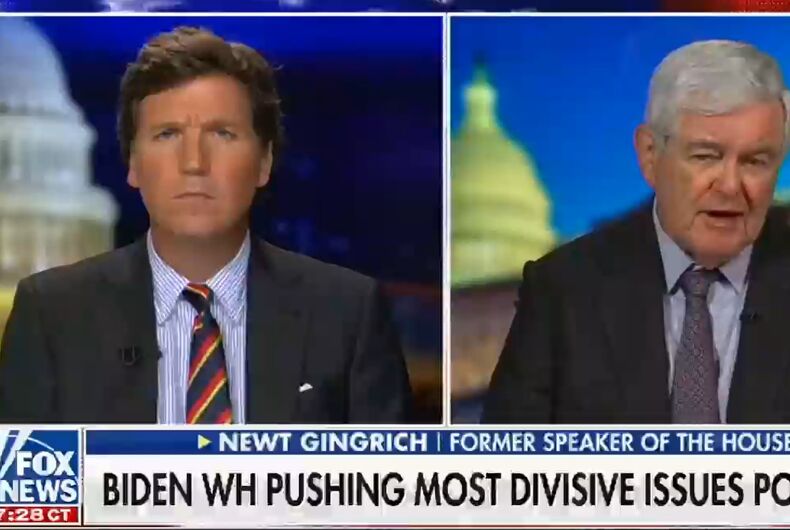 On Tucker Carlson Tonight, Carlson asked Gingrich why Democrats are trying to pass “the most divisive policies up front,” referring to the Equality Act, the COVID relief bill, and background checks for gun sales.

“All the things that they want hurt the country in immeasurable ways,” he said. “Why would you want those things?”

After ranting about how undocumented immigrants are responsible for spreading COVID-19 in Texas and not Gov. Greg Abbott’s (R) refusal to implement basic safety measures – a claim that is false – Gingrich turned to the Equality Act.

“They don’t want to protect your America,” Gingrich told Carlson, who has been called a “white supremacist sympathizer.”

“They want to create an alternative America. It’s an America of racial- deep inequality and an anti-white, and by the way anti-Asian, basis. It’s an America in which transgender dominates Christianity and Judaism.”

Carlson has made anti-transgender statements in the past. He attacked a non-binary epidemiologist on his show earlier this year, calling them a “leftwing activist” denying white people the COVID-19 vaccine simply because they had a transgender flag in their Twitter bio.

Last year, he said that transgender children are “grotesque” and that there is a “nationwide epidemic” of parents forcing their kids to be trans, which he called “abusing a child.”

In 2019, he said that transgender equality is “an issue for rich people” and “a boutique issue of particular concern to people from certain zip codes, income levels, education levels.” Tucker Swanson McNear Carlson himself is extremely wealthy, his father was an ambassador, and his stepmother was one of the heirs to the Swanson frozen food fortune.

A teacher spoke about a trans woman for 2.5 minutes. Now parents want him fired.