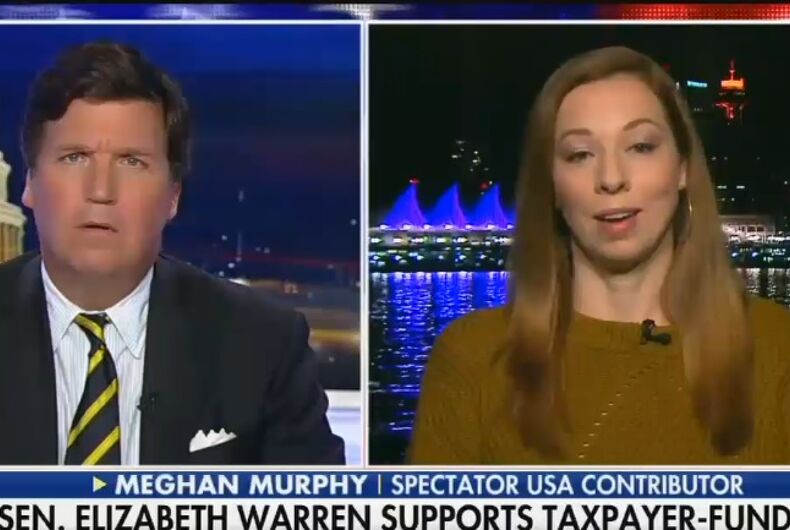 Speaking on his Fox News show last night, Carlson introduced his guest, conservative website Spectator USA writer Meghan Murphy, by saying that transgender equality is unimportant to “a struggling blue-collar worker,” a parent whose kid is addicted to opioids, or “any normal person.”

“We’re talking about a tiny, tiny, tiny minority of the population who identifies as transgender,” Murphy said. “People are probably worried about, you know, things like keeping their jobs, having housing, having health care, et cetera, et cetera. It’s a really strange thing to focus on.”

Carlson did not ask her why she believes transgender people don’t worry about “keeping their jobs, having housing, having health care,” or how transgender equality is unrelated to those subjects.

Instead, he asked: “But it does seem like a boutique issue of particular concern to people from certain zip codes, income levels, education levels. I mean, it’s – it’s kind of an issue for rich people, is it not?”

“I consider it a totally academic issue,” Murphy responded. Since she is cisgender, it is unsurprising that she would see transgender equality as an “academic issue.”

She did not explain why she opposes transgender rights if the issue is “academic” to her.

Even though Murphy started her career on the Canadian website The F Word: Feminist Media Collective, she made a name for herself for her criticisms of feminism and her opposition to transgender rights.

Her constant transphobia and harassment of transgender people led to Twitter suspending her account. She sued, but her lawsuit was dismissed.

“People who are in universities are privileged people in North America, people who – you know, who exist in academia are, of course, going to be mostly middle and upper-class people,” Murphy, who has a Masters degree in gender, sexuality, and women’s studies, told Carlson.

She did not provide any evidence that academia invented transgender people.

Their point is also belied by how wealthy people vote. According to 2016 exit polls, wealthier people were more likely to vote for Donald Trump, while less wealthy people voted for Hillary Clinton, even though Trump has made rolling back transgender equality a central goal of his administration.