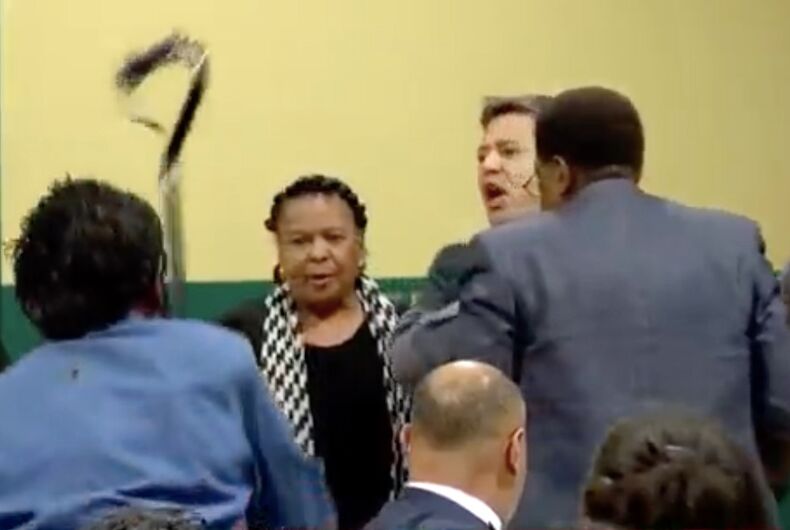 A meeting among prominent leaders in South Bend’s black community discussing their experiences with Mayor Pete Buttigieg went off the rails when a Black Lives Matter (BLM) protestor stole the microphone from City Councilwoman Sharon McBride and began shouting that the city is experiencing a “crisis because of police violence” and asked, “Who chose these people as the black leaders?”

During most of the meeting, which was set up by local citizens to counter the narrative that Buttigieg lacks support among black voters, BLM protestors silently stood at the back of the room holding a BLM banner and signs mentioning issues Buttigieg has had with the city’s black community, like homelessness and police violence.

As the meeting’s organizers and speakers attempted to regain the mic from the agitator, another woman unsuccessfully attempted to hit him with a cane. The man was eventually escorted from the room. BLM later declined to issue a comment to the media.

Here is video footage of the encounter:

There was just a major ruckus at this event with prominent African-American leaders that are supporting Mayor @PeteButtigieg. People who appear to be from Black Live Matter stole the mic from councilwoman Sharon McBride pic.twitter.com/OpONPL3bo5

This fracas arises concurrently as Henry Davis Jr., a recently re-elected South Bend city councilman with a history of homophobic behavior, attacked Buttigieg in an interview, criticizing the lack of integrated schools in Buttigieg’s county.

He also lost to Buttigieg in the 2011 South Bend municipal primary and was arrested for drunk driving the wrong way down the bypass.