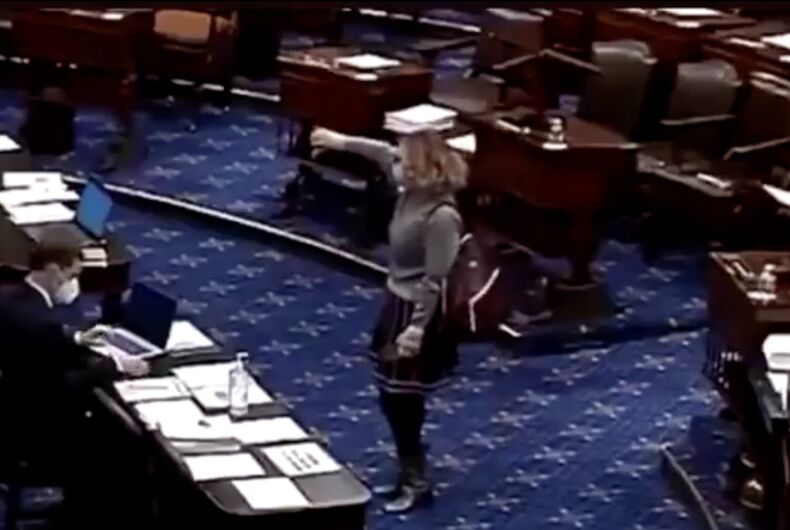 Sen. Kyrsten Sinema (D-AZ) voted against Sen. Bernie Sanders’ (I-VT) amendment to the COVID-19 relief stimulus package bill on March 5 that would have stipulated raising the minimum wage to $15.

Sinema, one of two out women in the Senate, was one of six other Democrat Senators and a Democrat-caucusing Senator that voted against the amendment alongside the 50 Republican Senators. Still, Sinema is getting the brunt of backlash for her vote, especially for the way she went about delivering it.

The vote ended with 58 against, to 42 for, adding the minimum wage raise to the $1.9 trillion COVID-19 relief bill by waiving the procedural objection of the Senate parliamentarian.

But Sinema is getting the brunt of the attention because video of her walking up to make her vote clear by intensely threw her thumb down has gone viral online. It caused comparisons between her and the famed aristocrat, once-queen of France Marie Antoinette.

Did Sinema really have vote against a $15 minimum wage for 24 million people like this? pic.twitter.com/Jv0UXLKLHI

It didn’t help that Sinema had previously served cake earlier in the day, and Marie Antoinette is associated with the phrase “let them eat cake.” The cake was reportedly after everyone stayed late working the night before due to a complete read-out of the 600-plus page amendment.

Sinema is the first bisexual woman ever elected to the Senate, winning election in 2012 and re-election in 2018 after previously serving three terms in the House of Representatives. She has previously received attention for her subtle and not-so-subtle fashion statements, but she has also received criticism for her record of going against the other Democrats in favor of the centrists and conservatives’ agendas.

“The way she is voting is really disappointing,” a progressive political operative said at the time when she was facing a possible censure from the state party. “We want Democrats to vote like Democrats and not Republicans.”

Sinema later put out a statement, trying to explain that she supports a minimum wage increase, but says that “the Senate should hold an open debate and amendment process on raising the minimum wage, separate from the COVID-focused reconciliation bill.”

She stressed that she still believes, “no person who works full time should live in poverty.”

According to HuffPost, Sinema’s office derided the criticism the Senator is facing as sexist and refused to respond to their inquiries.

“Commentary about a female senator’s body language, clothing, or physical demeanor does not belong in a serious media outlet,” spokesperson Hannah Hurley stated.

Using hand gestures for delivering votes are common in the Senate, and one of the late Sen. John McCain’s (R-AZ) lasting memories is delivering a thumbs down motion to turn down a GOP-sponsored repeal of Obamacare in 2017.

I am insane and zoomed in on another picture of her carrying and in the spirit of Edward R. Murrow-level journalism I'm humbled to announce in a parody of white feminism Krysten Sinema [sic] voted against a $15 living wage while carrying a giant Lululemon bag. pic.twitter.com/BCHVCbpvR2

According to @ThePlumLineGS, she just voted against a wage increase for 839,000 of her constituents like this https://t.co/zXmWdZTEK5

A Tale of Two Arizona Senators

How it started How it’s going pic.twitter.com/ix30lxLo9N

Gonna tell my kids this was Kyrsten Sinema pic.twitter.com/tITkexs2DK

America is at an inflection point. Malcolm Kenyatta believes we can face it.