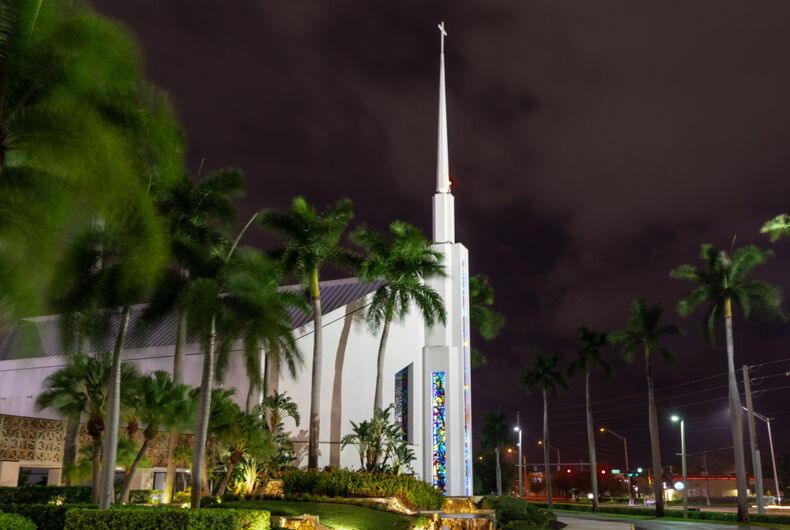 Dean Trantalis went out on a limb. Fort Lauderdale’s gay mayor honored the anti-LGBTQ church, Coral Ridge Presbyterian, with a flowery city proclamation. Without merit, he said that they had reformed. He scolded critics to lighten up because “Times have changed and so have their leaders.”

As Trantalis vulnerably stood alone on his olive branch, the church responded to his kind overture by chopping down his tree. Proclamation firmly in hand, Coral Ridge no longer felt the need to play nice. They morphed back into the Southern Poverty Law Center (SPLC) hate group we all knew too well. It was an eye for an eye, and when Trantalis turned the other cheek they gleefully slapped it.

Related: Christian conservatives use Facebook ads to spread misinformation about the Equality Act

“I hate to break it to them, but many of our gay and lesbian friends. They’ve just been used by the left to destroy the historic definition of marriage and changed the criteria to only be that of love. If two people love each other, or some guy and his Volkswagen, he loves his Volkswagen, he ought to be able to marry his Volkswagen.”

Wright then questioned Trantalis’ motives for offering the proclamation, accusing him of having a hidden political agenda to boost his political career. “He’s trying to build bridges to another part of the community by showing his reasonableness. But even hidden within that reasonableness, even within the velvet glove is still a fist.”

But, should he have let it go?

Aside from creating a false equivalency–blaming LGBTQ activists for not being kind enough to their chief tormenter–Trantalis didn’t do his homework. Had he done so, he would have learned that Coral Ridge hadn’t changed its wicked ways. Does the mayor not realize that if he had children they would not be allowed to attend Coral Ridge’s Westminster Academy?

In the past year, D. James Kennedy Ministries, which shares an address with Coral Ridge Presbyterian, published an article on sex education. The article quoted a pastor who said, “With the new sex-ed curriculum revolution taking place in public schools, it is a literal spiritual genocide….It is so twisted with a radical LGBTQ [sic] taught to young children all the way down to kindergarten, convincing them that they can change their gender—be a boy on the inside, girl on the outside.”

I take no pleasure in criticizing the mayor. I’ve known Dean Trantalis for twenty-eight years and I like him. But to paraphrase Coral Ridge’s most infamous “ex-gay” ad, “If you love someone, love them enough to let them know the truth. The truth will set you free.”

The hard truth is that the mayor badly miscalculated. He elevated and celebrated a church that is still actively discriminating against LGBTQ people. As we saw on their Facebook Live broadcast, Coral Ridge demonizes and dehumanizes gay and transgender Americans to this day. They have yet to apologize for past sins, nor offered tangible policy changes. The Southern Poverty Law Center was correct when it said yesterday that the proclamation “is a slap in the face to the hundreds of thousands of LGBTQ residents that call the area home.”

People are human and make mistakes. Fort Lauderdale residents will forgive Trantalis if he admits to poor judgment. Clearly, he prematurely awarded Coral Ridge Presbyterian a proclamation they haven’t earned. Their brazen actions since receiving the prize, and dismissive treatment of Trantalis, prove Coral Ridge is undeserving and has no intention of reconciliation. The facts necessitate that the mayor revisit the issue and rescind the proclamation.

If he can’t be a leader by acknowledging fault and rectifying the situation, Dean Trantalis should resign. While it’s nice to have a gay mayor, it’s even more important to have one with character who represents the values of his constituents. Mayor Trantalis should rise to the occasion and do what’s right, not what’s expedient to further potential ambitions for higher office.