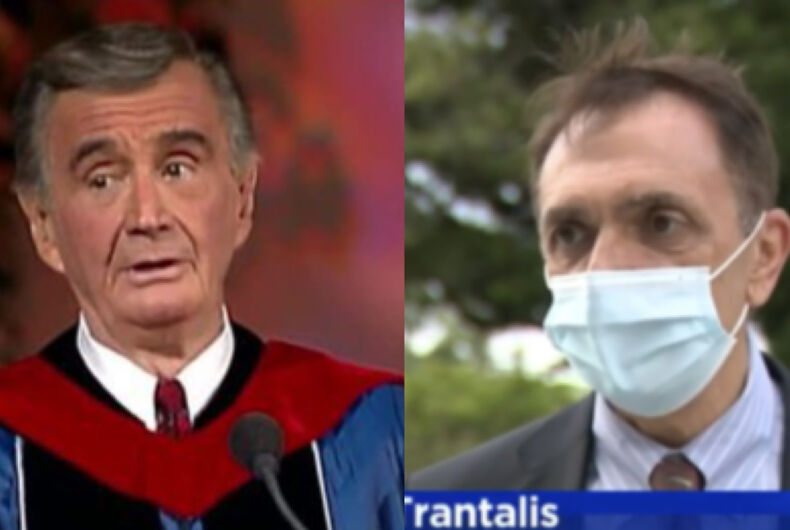 Advocates and members of the LGBTQ community in Fort Lauderdale, Florida, are pleading with the city’s first out mayor to not sign a proclamation being presented by the Fort Lauderdale City Commission that would honor an anti-LGBTQ church.

A church and school created by Dr. D. James Kennedy, whose organization of ministries is designated as an anti-LGBTQ hate group by the Southern Poverty Law Center (SPLC) are set to receive a day of commemoration on March 21 if the proclamation stands.

Kennedy became one of the most watch televangelists in the 1980s and 1990s, and also one of the most prominent marriage equality opponents in the 2000s. He penned the book What’s Wrong With Same-Sex Marriage? in 2004 in opposition to marriage equality, proclaiming to “use Scripture to show what God says about homosexuality and marriage” but also claiming he was “maintaining a loving attitude toward homosexuals as human beings.”

He endorsed the comic book Homosexuality: Legitimate, Alternate Deathstyle that admonished the LGBTQ movement in the 1980s. One part of the book claims, “we’re all gonna DIE because of those homos,” in introducing the topic of AIDS.

The SPLC also notes one instance where Dr. Kennedy published a newsletter with the headline, “Sex With Children? Homosexuals Say Yes!” next to photos of children.

Kennedy resided in Fort Lauderdale at the time of his death in 2007. He created the Coral Ridge Presbyterian Church in 1960, the schools Westminster Academy in 1971, and Knox Theological Seminary in 1989.

Since his death, his ministries tried and failed to sue the SPLC for designating them as a hate group. A federal judge dismissed that lawsuit in 2019.

A proclamation presented by Commissioner Heather Moraitis seeks to honor the 50th anniversary of the Academy and the 60th of the church, making March 21 “Coral Ridge Presbyterian Church Day and Westminster Academy Day” across Fort Lauderdale. Moraitis is the Director of Development at Westminster Academy.

Vice Mayor and Commissioner Steven Glassman said in a statement to South Florida Gay News that “it is important to note that for many in our community, the name of Dr. D. James Kennedy and Coral Ridge Presbyterian Church still brings forth many bad memories and a lot of hurt and pain. The wounds are still there.”

Trantilis, however, seems prepared to move on from those wounds. “I have reached out to many segments of my community, including those that are faith-based. Times have changed, and so have their leaders, and every one of them has been eager to bring our communities together,” he said according to Equality Florida, “it’s time to build our future based on love and not hate, and it’s time for those who still harbor resentment to let go of it. I know I have.”

Equality Florida didn’t denounce the decision, although they recall in their statement that their “first big campaign was in 1998 to stop a dangerous conversion therapy program hatched at the [Coral Ridge] that specifically targeted children.”

“We are well aware of the long history of harm inflicted on the LGBTQ community over decades by Coral Ridge Ministries…. [but] we believe in redemption,” the advocacy group stated. While they “have not seen” any evidence of efforts by the church to amend or reform from its past, they “invite Coral Ridge to engage in that work” and are waiting for more evidence.

Advocacy group Truth Wins Out, however, calls the decision “outrageous.”

“We call on Mayor Dean Trantalis, the city’s first gay mayor, to put away his pen, and instead condemn this wretched Hate House for its unreconstructed bigotry and political discord, that has led to many of our nation’s current divisions,” Executive Director Wayne Besen wrote in a statement.

“Praising Coral Ridge with a proclamation, is the equivalent of honoring the Proud Boys or the KKK. It shocks the mind and offends the senses.”

Offering to “make a deal,” Besen requests an apology from the church before the proclamation is signed because “to celebrate Coral Ridge prior to a heartfelt apology is to participate in gross historical revisionism. It is to erect a façade to whitewash their record.”

The proclamation is planned to be presented at the City Commission tonight where Mayor Trantilis can sign it or not.

The late Mayor Justin Flippen would be turning in his grave. A few years ago he spoke w/ @wsvn of his traumatic experience to undergo #conversiontherapy at Coral Ridge. I hope Dean Trantalis reflects on Justin tomorrow night while he signs the proclamation. @browardpolitics pic.twitter.com/x1Q5CuQ7xj

Tell Fort Lauderdale mayor @DeanTrantalis and FTL commissioners TODAY that "no apology, no proclamation" honoring Coral Ridge Ministries. This church is divisive and pioneered "ex-gay" programs. It led the Truth in Love "pray away the gay" ad campaign. https://t.co/0nr8nlrMwN

Today, the City Commission will convene for a Conference Meeting, a CRA Board Meeting, and a Regular Meeting.
Watch these meetings live or at any time after they adjourn on the City's YouTube: https://t.co/c2UZibiGsn
To view today's agendas, please visit:https://t.co/rkYpULarxI https://t.co/xCQK9MyLkj