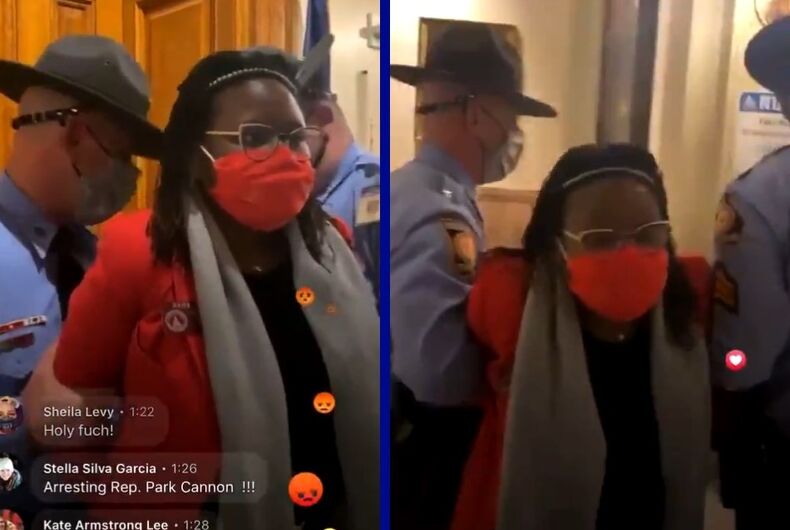 The Georgia state trooper who arrested out Black State Rep. Park Cannon (D) last week after she knocked on the Republican governor’s door said that he was worried that a riot – like the Capitol insurrection in January – could start if he didn’t arrest her, according to the paperwork he filed.

In a 13-page incident report, officers said that protestors were trying to break into where the governor was signing a bill restricting voting rights and that “Cannon’s actions of obstructing law enforcement in front of agitated protestors to constitute a breach of the peace” put the governor in danger, although witnesses said that no one tried to break down the door and attack the governor.

Georgia Gov. Brian Kemp (R), who is white, was signing a bill restricting voting rights in a private ceremony attended last Friday with only other white men present. The bill increases voter ID requirements for absentee ballots, allows state officials to take over local elections, limits the use of ballot drop boxes, and even makes it a crime to give water to people standing in line to vote.

Cannon tried to witness Kemp signing the bill. After a discussion with the state troopers guarding the door, she went to knock on the door. The officer grabbed her hand and arrested her, and she now faces two felony charges even though she is a state elected official. It is illegal in Georgia to arrest a sitting representative during a legislative session.

In his incident report, Langford said that the incident was like the January 6 insurrection at the Capitol, where supporters of Donald Trump rioted at the Capitol in an attempt to keep Congress from certifying the results of the 2020 presidential election. The almost uniformly white crowd chanted for the death of Mike Pence, who was presiding over the Senate, with the ultimate goal of overturning the will of the voters in 2020. Five people died in the riot.

While that’s a far cry from one state elected official knocking on a door, Lt. G.D. Langford’s report on the arrest says that he thought that her knocking on the door would lead to a similar riot, saying that the peaceful protestors “began to get louder as she was refusing to follow my commands.”

“The events of January 6, 2021 at the U.S. Capitol were in the back of my mind,” wrote Lt. Langford. “I believed Cannon’s actions of obstructing law enforcement in front of agitated protestors to constitute a breach of the peace.”

He said that he dragged her to an elevator and told her to “stop making it worse.” Langford also claims that Cannon stomped on his foot and included a picture of a scuffed boot and bruising that he says she caused.

“I’ve tried a lot of cases. It’s not often that the witnesses and the cameras saw everything that transpired,” said Gerald Griggs, Cannon’s attorney. “Those alleged injuries — if there are any — are not consistent with the witnesses, the evidence or the video.”

Sgt. N. Jenkins claims in the report that Gov. Kemp’s comments were cut short due to Cannon. A staffer allegedly told Jenkins to “lock the office down and move the Governor and First Lady from the Ceremonial Office as the side door was shaking so violently, he felt it would be breached.”

Officer Vince Mooney said that the protestors were “attempting to breach the wooden doors.” But the Atlanta Journal-Constitution reports that several witnesses said none of the protestors even went near the door.

“Nobody touched that door. We didn’t go anywhere near that door. We followed the police officers who were taking Park into the elevator,” said Tamara Stevens, a protestor who recorded the arrest. “There was no attempt, flat out, to breach the door.”

I was proud to sign S.B. 202 to ensure elections in Georgia are secure, fair, and accessible. I appreciate the hard work of members of the General Assembly to make it easy to vote and hard to cheat. pic.twitter.com/1ztPnfD6rd

The NAACP and other civil rights organizations have filed a federal lawsuit against Georgia to overturn the law, alleging that it violates both the Voting Rights Act and the Constitution.

“This law is driven by blatant racism, represents politics at its very worst, and is clearly illegal,” said Sophia Lakin of the ACLU’s Voting Rights Project said in a statement. “We urge the court to act swiftly to strike it down.”

Cannon is facing a felony charge of obstructing law enforcement officers by use of threats or violence and a second charge of disrupting general assembly sessions or other meetings of members.

She first took office in 2016 and has pushed back against Christian conservative policy in the years she has been in office, supporting the state’s hate crimes legislation, opposing a religious exemptions bill that Democrats said would lead to LGBTQ discrimination, and opposing restrictions on abortion rights.