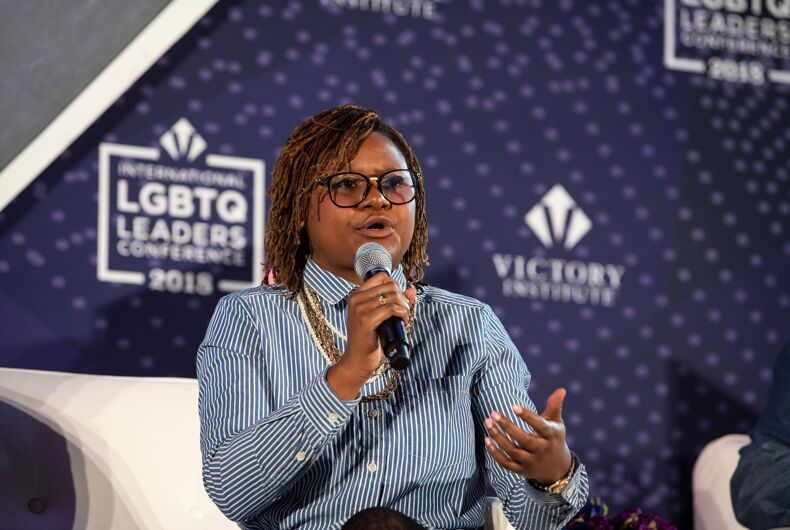 Georgia Representative Park Cannon (D-58) is young, queer, and fired up. Currently running for a third term in the Georgia House of Representatives, Cannon first made a name for herself when she became the youngest elected official in the state legislature, elected at 24 years old in 2016.

Since then, she’s become known for passionately fighting for progressive change in Georgia, from speaking out against abortion bans to sponsoring legislation calling for medically accurate HIV/AIDS instruction in sex education.

Now 28, Cannon has no plans to slow down.

“There’s so much work to be done,” she told LGBTQ Nation.

Her excitement was palpable as she explained that the LGBTQ community was included in this legislation.

“In the week before Pride month ends, we can stand side by side, even though we cannot march and be with each other in normal pride month ways, to say we are passing Georgia’s first hate crime legislation, which verbatim to the text includes sex, sexual orientation, and gender. It’s a beautiful time for what interesting hope we’re all holding this pride month.”

A founding member of Georgia’s Equality Caucus, Cannon is dedicated to increasing LGBTQ representation in the public sector.

“I fully believe that LGBTQ visibility in elected office is imperative at this time. We have to be at the forefront in order to show chambers of commerce, business associations, homeowners associations, police officers, allies, and community members who the LGBTQ community really is so that we’re not all put into the same boxes,” she said.

“When you knock doors around the state of Georgia, you see LGBTQ families. We are a rainbow and diverse state, not just city or county, but state. So [there are] opportunities to galvanize our own local communities, our rural and suburban communities.”

“As a Black queer person from the South who is enamored with multiple languages and cultures and opportunities for justice,” she said, “It sometimes comes out differently the way I call for justice than some other members who are predominantly in the forefront in LGBTQ space.”

Going into her next term, Cannon, who is also a doula, is focused on working to reduce Georgia’s maternal mortality rate for Black women.

“I am a queer doula who helps people when they are in labor, and even through COVID-19, we have had experiences where maternal mortality and maternal health and access to abortion and full-spectrum reproductive health have been diminished. We stand clear that Black [mothers] are still today dying three times more than white [mothers] in the state of Georgia.”

She is also dedicated to making more progress around HIV.

“As it occurs to the chairs of the committees who appropriate funds for HIV services, there is still a stigma there and the LGBTQ community is one of many communities that can help chip away at those frustrations and turn it into everyone having a thriving healthcare system.”

Cannon describes herself as “an activist elected official,” one who stands in complete solidarity with the current protest movement against police violence. Two of the murders that have sparked recent public outcry, the killing of Ahmaud Arbery and the killing of Rayshard Brooks, took place in Georgia.

Cannon feels hopeful, though, that the momentum from this movement can last.

“We have seen even in the June 9th election in the state of Georgia, elected officials have been voted out, and in these races—sheriff races, district attorney races—these conversations of justice have impacted voters’ willingness to stand in line for hours,” she said.

“Here in District 58, if you voted at Park Tavern, first of all, thank you and come back August 11th for the runoff elections, but people had to wait in line up to six hours, and so enduring voter suppression to make these electoral decisions on how to keep the LGBTQ community safe, and other communities of marginalized experiences, is paying off. So I see us moving full speed ahead.”

Voting issues have long plagued Georgia, and Cannon is part of a team working to change that. She is proud, she said, to have been appointed to a new Fulton County election task force, set up by the county chairman after the challenges of the June 9th election.

“Right now, we are working on securing funding from the Secretary of State to help counties just like Fulton County who are in need of constitutionally protected support from their agencies. We know that PPE will be in demand for August and November because our peak in Georgia for COVID-19 has not even hit yet, so we are really galvanized around securing funding to bolster our election processes here in Fulton County.”

Overall, Cannon wants voters to know she is working hard to bring “better solutions for a better Georgia.”

“We are proud of the solutions our community is making together,” she said, “and we know Georgia is getting better. I’m a girl raised in the South, so I’m poised to make a difference by bringing communities together, and I just want people to stand with us.”