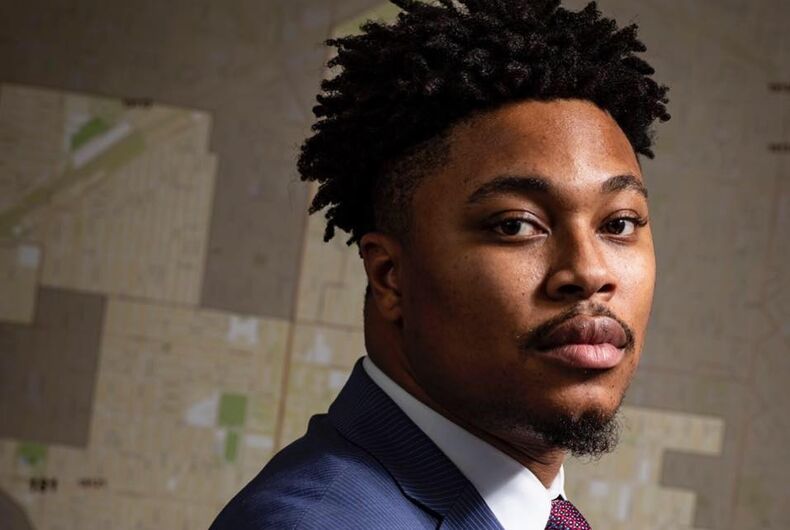 In 2018, 27-year-old Malcolm Kenyatta (D) became the first out LGBTQ person of color elected to the Pennsylvania legislature. With a platform that prioritized fighting deep poverty, Kenyatta landed this historic victory with more than 95% of the vote from his North Philadelphia district.

Chronicled in a short documentary called Going Forward, Kenyatta’s intense passion and commitment to change has captivated many.

Related: A gay socialist could be the first LGBTQ person of color in the New York legislature

Now 29, Kenyatta is running to maintain his seat, this time unopposed.  Two years into his work in state politics, he seems as fired up as ever.

“This is a moment where I think the country is asking itself a question,” he told LGBTQ Nation, “and I hope we answer it the correct way. That question really is, in all these beautiful documents, so many of them written in Philadelphia, are we actually going to live up to those principles?”

Liberty and justice for all, he continued, is not currently attainable for all communities.

“As somebody who inhabits all of these intersections, growing up in an incredibly poor neighborhood to a working poor family, as one of only two openly LGBTQ members of the Pennsylvania General Assembly and the only one that’s a person of color, I see all the different ways that frankly our systems are broken.”

Last week, Kenyatta and other members of the Pennsylvania Legislative Black Caucus took over the house floor in an act of peaceful protest in support of the Black Lives Matter movement and the current movement against police violence.

“From that demonstration, we got them to move four bills around police reform that had been introduced a year ago, but they didn’t move until we did that. And it was buttressed by all the people who for twenty days have been showing up and demanding change.”

To Kenyatta, police reform is an LGBTQ issue.

“I think it’s just so interesting that all this stuff is happening during Pride Month because the idea of Pride is not about Coca-Cola or whoever painting a can rainbow colors. It’s about this idea that everyday people, when they step up and demand change, they actually win a lot more than folks think.”

The story of the LGBTQ community, Kenyatta said, is the story of people who are tired of being treated “like garbage” by the police.

It is the story of people “who stood up and stepped up and said, ‘Heck no we’re sick of this. We want things to be different,’ and because of this bravery, things were different.”

Kenyatta supports the need to completely reimagine public safety in America. “We really do need radical reform to policing and radical systems reform… We have to ask the question, what are the police protecting? What they’re protecting are really these systems of discrimination.”

Moving around resources, he added, is not enough.

Kenyatta represents district 181, one of the top three poorest districts in the state. He believes deep poverty is “the moral and economic issue of our time.”

It is connected to all other issues, he said, because those living in poverty are disproportionately affected by issues like climate change, gun violence, criminalization, and mental health challenges.

Being the first and only out LGBTQ person of color in the legislature, he said, has been a huge responsibility. He is grateful that many of his colleagues in the Black Caucus have been open to learning from him, but he said he has worked hard to make sure that all Black lives are being considered in the phrase Black Lives Matter.

Kenyatta said he has also worked to ensure that when people think of the LGBTQ community, they don’t only think of white, cisgender men.

“It’s those folks who have dual identities that are most at risk… I consider my mission to elevate the voices of people who are ignored in our sort of majoritarian conversations.”

Kenyatta said he is tired of seeing his district ignored by both the public and private sector.

“No one has said, how do we do a major investment in North Philly… it’s so unfair and wrong, and it’s incredibly frustrating for us to continue to make conversations where folks who are not well off are just not a part of the political conversation.”

He thinks especially of the parts of his district where the average annual income is $10,000.

“That’s absurd,” he said, “and yet these folks every single day get up and go about their lives, find a way to have a smile on their face to keep going the way my mom and dad did, and I just don’t see the change that these folks really need and it’s incredibly frustrating.”

Kenyatta is deeply concerned with the lack of economic mobility his constituents experience.

“What I’ve learned is we don’t live in a meritocracy. Period. So much of the success I’ve had frankly has been because of good luck and because I’ve had a professor or a teacher or somebody who really poured into me, who really cared about me, who helped me make connections… [We] continue to tell this lie that if you just work hard everything will be great when the reality is there are folks in my district who work hard every single day, many of them the same essential workers we all just woke up and recognized we fucking need… They work their butts off and yet we can’t even get fifteen dollars an hour for them.”

Kenyatta wants big change for his community, and one of the biggest things he has learned since getting elected is that it is incredibly difficult to make meaningful change without public pressure.

“Things don’t just happen because you have a great idea and a great bill… Nothing major happens without public pressure, and that’s what we’re seeing right now around police reform.”

Kenyatta is fighting with the legacy of his grandfather, civil rights activist Muhammed Kenyatta, in mind. “I recognize it’s really on his shoulders, and the shoulders of so many queer activists and non-binary folks and other Black folks who stepped up in ways that really changed the conversation.”

Right now, Kenyatta said, so many conversations are being had around finding justice for marginalized communities.

“We’re in this moment of intense pain, but also intense possibility where the band aid has really been ripped off in terms of policing, in terms of economic injustice, in terms of gender justice, and justice for LGBTQ folks, non-binary folks, and trans folks. We’re having all of these incredibly painful conversations, but I think on the other side of that pain comes an ability for us to address root cause issues… As we start to address these things, as we start to call them what they are and call them out, I really do think we’ve shown the capacity to change things.”

This optimism, Kenyatta said, is what keeps him going.

“If I didn’t have that optimism there’d really be no point in me getting out of bed in the morning, but I get out every single day because I see people in my neighborhood who get up every single day, and all they really need is a shot and a chance. I’m working my ass off to make sure they’ve got that shot and that chance, and I know when they get it, they’re going to take full advantage.”