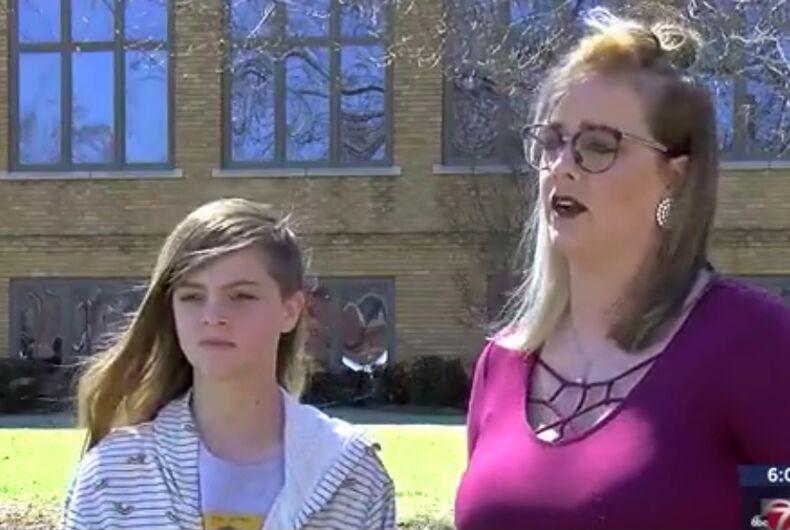 Oklahoma mother Dawn Snodgrass is springing into action after her 12-year-old daughter endured anti-LGBTQ remarks during a class discussion.

Related: Federal court rules that professor can sue school that disciplined him for misgendering student

Snodgrass got a call from her daughter after the comments were made, at the end of a “political” discussion the class was having. She immediately drove up to Frederick Middle School and requested a meeting with the principal and counselor.

Snodgrass told reporters that she became emotional advocating for her daughter.

“I was upset,” Snodgrass said. “I couldn’t form thoughts. I couldn’t speak. I was shaking. I was crying. Even in the principal’s office, I was crying.”

“I feel that my daughter was bullied in a sense because she is part of the LGBTQ community,” she said.

Karagyn is pansexual, and her mother said that people bring up religious rhetoric all the time when discussing LGBTQ people.

“Small town Oklahoma schools, a lot of the time they do talk about religion,” Snodgrass explained. “The counselor had brought up that even in her counseling sessions, she talks about religion and uses it as a reference and that’s not okay either.”

The principal agreed to look into the incident after Snodgrass came to him. Now Snodgrass has taken her story to the school district superintendent, demanding action is taken.

“The principal called me back and said that he talked to some students. The story remained the same throughout. That is what happened and he said he talked to the teacher and she’s horrified and apologized,” she said. “I told him that’s not really enough. Something else needs to happen.”

Frederick Public Schools Superintendent Shannon Vanderburg said that an investigation is underway and his office will meet with Snodgrass soon over the issue.

While he didn’t want to comment on the investigation, Vanderburg did tell local ABC affiliate KSWO that if the story is true as Snodgrass has told it, it’s not condoned by the school district.

“We always strive to provide a school where all kids are welcome who can pursue their education unimpeded,” he said.

Snodgrass also wants to remove her daughter from this teacher’s class, and for them to issue an apology to the entire class. If not, she’s “prepared to take the issue further.”

“I would hope that policies are put into place moving forward to protect not only the LGBTQ community but the student body as a whole,” Snodgrass said. “I mean, from all religious backgrounds, all varying viewpoints.”