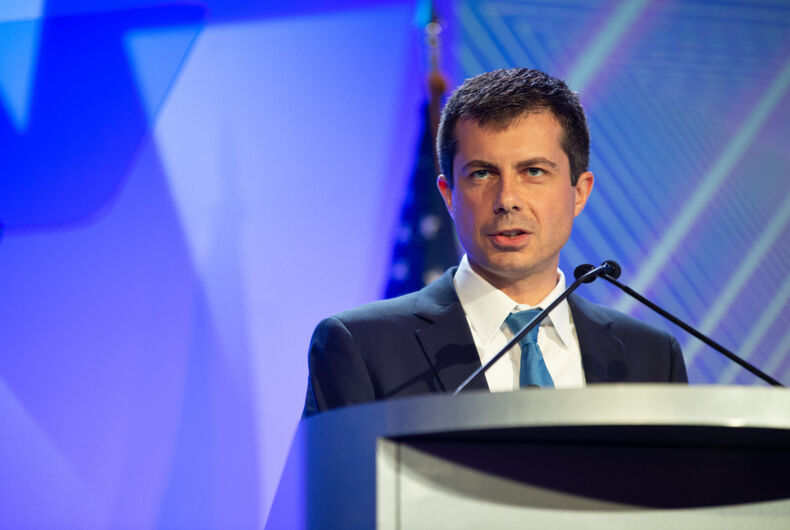 Without much support from the outgoing administration, the Biden-Harris transition team has had their work cut out for them. After figuring out who will fill out the essential spots in their eventual staff, they are now getting prepared for their cabinet-level officials to go before the Senate so they can get confirmed and start work on implementing the administration’s agenda.

Pete Buttigieg will be first up.

Buttigieg, who Biden is nominating for Secretary of Transportation, will immediately go under consideration before the Senate Committee on Commerce, Science, and Transportation on January 21 — less than 24 hours after Biden’s scheduled swearing-in.

A spokesperson for Sen. Roger Wicker (R-MS), who chairs the committee, made the announcement just on January 15, giving Buttigieg and the Biden-Harris staff less than a week to prepare. The hearing will start at 10 o’clock eastern standard time and available live on www.commerce.senate.gov.

Buttigieg will be expected to testify in the Russell U.S. Senate Office building, before the full committee — which includes 26 senators, 14 of them being Republicans, giving them the slight majority. Sen. Maria Cantwell (D-WA) serves as the Ranking Member.

Other conservative members of the committee include Sen. Ted Cruz (R-TX), Sen. Marsha Blackburn (R-TN), Sen. Cory Gardner (R-CO), Sen. Mike Lee (R-UT), and Sen. Rick Scott (R-FL). On the other side of the aisle, Buttigieg will find familiar faces in Sen. Amy Klobuchar (D-MN), who he faced off against during the 2020 Presidential election primaries, Sen. Tammy Duckworth (D-IL), and out Sens. Tammy Baldwin (D-WI) and Kyrsten Sinema (D-AZ).

If Buttigieg is approved by the committee, he will then be considered by a full Senate vote for confirmation. By that point, the U.S. Senators from Georgia — Jon Ossoff and Raphael Warnock — will likely have their election results certified and will have been sworn in, bringing the Democrats exactly to 50 caucusing members, matching the 50 Republicans remaining.

At that point, Buttigieg would only need a simple majority from the entire body of the Senate to be confirmed as Secretary. Each Senator does not have to be present or vote, and in the event of a tiebreak, soon-to-be Vice President Kamala Harris would be able to cast the decisive vote as President of the Senate.

When talking about his nomination after being introduced by Joe Biden, Buttigieg said he remembered the opposition to former ambassador James Hormel, a gay man, during the Clinton administration and the message it sent to him as a teenager.

Since the Senate Committee on Commerce, Science, and Transportation has more Presidential appointments to consider than most other committees, it was expected for them to schedule their first hearings as early as possible.

The decision to consider Buttigieg first may be to fill the position he’s nominated for as soon as possible, since Buttigieg’s predecessor, Elaine Chao – whose husband is current Senate Majority Leader Mitch McConnell (R-KY) – resigned. She announced her decision on January 7, saying she was “deeply troubled” by the “entirely avoidable” riots that had took place at the Capitol the day before. The resignation went into effect on January 11.

How a potential Senate trial to convict Donald Trump of impeachment — even if it continues beyond his his departure from the Oval Office, and how that would effect nomination and confirmation hearings — remains to be seen.

Editor’s Note – A version of this story previously included Senator Tammy Duckworth (D-IL) as an out member of the LGBTQ community. That is incorrect, and we regret the error.