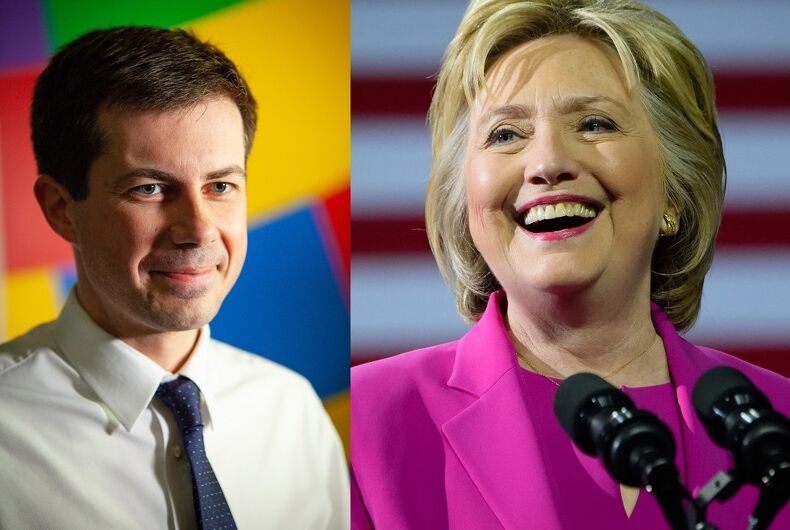 Former South Bend, Indiana Mayor Pete Buttigieg will soon become the first out LGBTQ U.S. Cabinet nominee. So he turned to someone who knows the lay of the land for help: former Secretary of State and Sen. Hillary Clinton.

“I wanted to ask you for advice in a way that I would be doing even if we were just on the phone instead of on a podcast,” Buttigieg said to the winner of the 2016 popular vote on his podcast The Deciding Decade. “What does it take to be a good and effective Secretary and member of the President’s Cabinet?”

“Well, first of all, congratulations,” the former first lady said. “I’m thrilled by the news that you’re going to be nominated and hope that your confirmation is smooth and quick so that you can assume the responsibility. I think it takes several things, and you’re well acquainted, having been in an executive position as mayor, running a city government and then of course running a presidential campaign, which is quite an undertaking.”

And then Clinton got down to business.

“I was blessed to have a great briefing ready for me,” said Clinton, who was frequently criticized in the media for being “overprepared.”

“The transition team, cooperating with the out-going Bush administration, was ready and willing to give me a very in-depth education quickly about how the State Department actually works,” she continued. “You should do exactly the same so that you are the Master of your Brief.”

“Because, first and foremost, you’ve gotta demonstrate in any of these Cabinet positions that you’re going to be a good steward, you’re going to lead and manage a diverse, complicated department.”

“Secondly, I think working with the incoming administration, you have to set some goals,” she said. “What is it that the president will want the Department of Transportation to do?” she asked, listing climate change and rebuilding trust in public transportation after the pandemic, as well as advocating for high-speed rail, even prepared to talk transportation policy.

“Finally, you’ve got to deal with all the legacy. You’ve got to do everything to make sure that roads are maintained, bridges are fixed. You’ve gotta look hard at what happened with the FAA and its hasty approval of the last big Boeing jetliner.”

She stressed the importance of transportation infrastructure: “So you’re in a great place to help shape the sort of future that we would like to have.”

Clinton also talked about her role in helping elect Joe Biden as an elector for the state of New York.

“When I was asked if I would be a member of the electoral college, I paused for a minute, because I’ve been on record since 2000 advocating for its abolition,” she said. She would be president at the moment if the U.S. had a system like most other modern democracies for electing presidents – or like any of the 50 states for electing governors – instead of the Electoral College.

“I think it has long out lasted any usefulness, but at the same time, I thought it would be a good signal that we were all coming together to participate in this historic constitutional ritual.”

“I could not have guessed, how the attacks against the integrity of the election would play out, and how desperate Trump and his enablers were to try to overturn the results.”

“So dropping that ballot in for Joe Biden and a ballot in for Kamala Harris, made it feel like OK, we’re really ready to move on from what we’ve had to live with the last four years.”