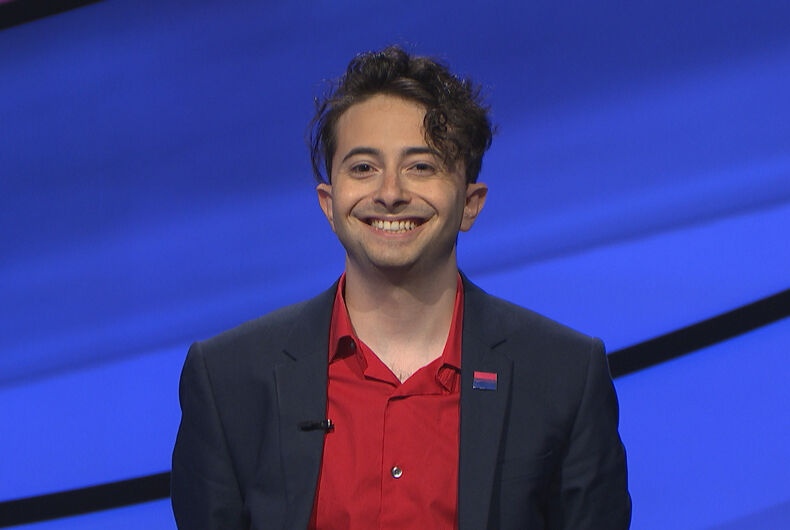 When Cody Lawrence beamed into living rooms across America, he brought the LGBTQ community with him.

Lawrence wore a bisexual pride flag pin on his lapel while competing in one of the last episodes with longtime host Alex Trebek. Trebek died of cancer earlier this year.

Related: A lesbian couple met competing against each other on Jeopardy. Ten years later, they’re married.

“I had an ephemeral platform for the evening, and I find we can use all the visibility we can get, because Bi-Erasure is a real phenomenon,” Lawrence wrote in a Medium post published after the episode aired. “Erasure is still a major problem both outside and notably within the LGBTQ+ space.”

The show’s sharp-eyed fans noticed his pin and social media quickly filled up with kudos for the out contestant’s quiet stand on behalf of bisexual people.

“I wore my pin on Jeopardy! because it’s a powerful symbol to show you that we exist,” Lawrence wrote. “WE EXIST.”

In 2019, former contestant John Presloid won America’s heart and some serious cash after casually mentioning his husband while declining to bet big on a Daily Double.

Presloid, who has been out for years, told LGBTQ Nation that “nobody who knows me personally was surprised at all by my statement.”

Presloid pointed out former contestant Louis Virtel who, after becoming internet famous for giving a big circle snap after winning a Daily Double himself in 2015, admitted that his biggest regret was being recognized as a gay man from stereotypes, but never actually saying he is gay.

I’ve always been bisexual and first became aware of it when I was 10. It wasn’t until age 26 that I started expressing my truth openly. Everyone should be able to come out on their own terms but #BiErasure made that more difficult for me.

I immediately recognized the pin and was so excited!! I told all my friends and they were too! I was watching with my parents and we were all rooting for you! It filled my heart with such joy to see you up there so proudly providing bisexual representation 💜

I was so excited to see your pin! And then you got the first question too and I pumped my fist in the air! 💗💜💙

Gay men are at higher risk of poor bone health