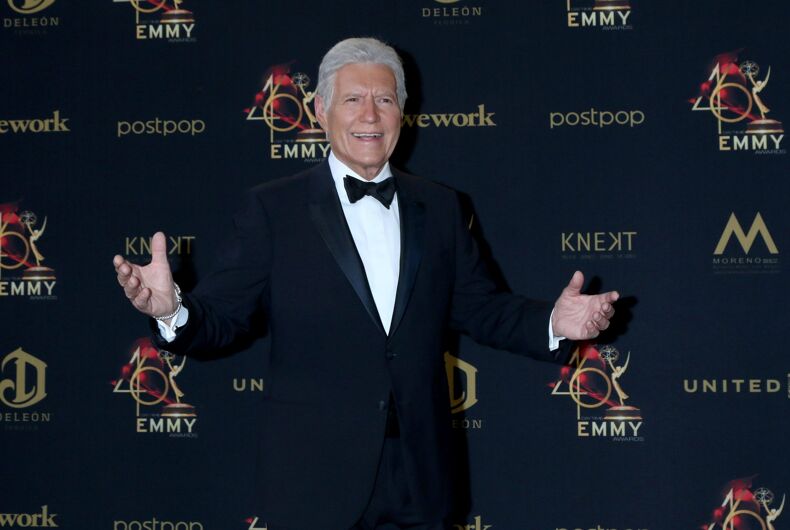 Jeopardy host Alex Trebek at the 2019 Daytime Emmy Awards on May 5 in Pasadena, CAPhoto: Shutterstock

Emily Therese Cloyd and Stacy Cloyd, a married couple in Washington, D.C., have one of the sweetest love stories possible. The couple met competing on Jeopardy and ten years later, they’re both still winning.

Emily shared the couple’s fortuitous history on Twitter as part of a tribute to host Alex Trebek, who is battling Stage 4 pancreatic cancer. Trebek was invited to the wedding, but unable to attend. Instead, he sent a note wishing the couple well.

Related: RuPaul was on Jeopardy last night & she won it all

The two met in D.C., she said when they both tried out for the show after passing the online test. During one of the icebreakers, Emily found out that Stacey had also attended the University of Michigan and was moving to D.C. soon to work at a not-for-profit.

In early 2009, I took the @Jeopardy online test – just like thousands of other people. And like many of them, I was invited to audition in person that spring.

When the coordinators asked who had come the furthest, one woman said she’d come from Ann Arbor – she’d just graduated from @UMichLaw (Go Blue!) and was planning to move to DC after the bar exam to work at @BreadfortheCity’s legal clinic.

“After the audition session ended, I followed Stacy on to the elevator and introduced myself as a fellow Michigan alumna and suggested that she get in touch when she moved to town,” Emily told Insider.

When she got the call to appear on the show, she flew to L.A. and quickly recognized Stacey as one of the other contestants. After a quick re-introduction, they chatted while they waited for their chance to win big bucks on the trivia show.

Stacey mentioned that her co-workers were going to hold a watch party when the show aired.

She didn’t recognize me. Or maybe she did, once I said I’d briefly met her at the audition. I think that she was being nice. She introduced herself as Stacy.

But when it came time to compete, the two were matched up against each other.

“When both of us were drawn for the fourth game, I was excited to be playing — and to be playing against someone who seemed like they’d take it seriously but also have fun,” Emily said. “It is a game, after all.”

Emily admits that she went down in flames during the game, but Stacey won the show, defeating the current champion.

And then my name was drawn. I’d be playing against Manny Maldonado III, who had just vanquished 4-time champion Regina Robbins, and Stacy.

I bet $350 on Final Jeopardy! I figured if I couldn’t win or come in second, I could at least make a nod to @350 and the importance of acting on #ClimateChange.

Final Jeopardy! was a triple stumper. I ended the game with $50. pic.twitter.com/bZgsyn2eIF

Over the next couple of months, Stacy and I were in occasional contact as things came together for the viewing party. Although we’d taped in mid-January, the episode didn’t actually air until the end of March.

Months went by before the show actually aired and since they had stayed in touch, Emily and Stacey made it a join watch party.

“The party was a lot of fun, and we met many of each other’s friends, and I also met Stacy’s parents and youngest brother,” she told Insider. “But at that point, I wasn’t thinking about more than friendship.”

The two stayed in touch and kept hanging out. Eventually, after “a few rounds of missed or crossed signals,” the two started dating.

Months later, Emily recounted, the two went to a special taping of the hit show and gave a note to the staff. It was an invitation to their wedding.

A little more than two years after our episode aired, we went to a taping of Celebrity Jeopardy! at DAR Constitution Hall. We hand delivered a note for Alex Trebek to one of the J! staff members. pic.twitter.com/4r753rzU28

While the host wasn’t able to attend, he did send warm wishes for their wedding.

“We weren’t expecting him to attend, so we weren’t surprised that his answer was no,” Emily told Insider. “But we really appreciated the short note wishing us the best for our marriage.”

As Trebek battles cancer, he gave a health update earlier this month and revealed how he would leave the show after a 35-year run.

“My resistance is lower because of the treatments I’ve been having, and as you can tell I’ve got the cold that’s going around, but this is the second time I’ve had it in the last month and a half,” he said. “They’ve got me off one of my chemo drugs, which was killing me, and I won’t know until tomorrow when I go in for some tests and then maybe a week or so when I know how things stand. I have good days and bad days.”

He said he has finally figured out how he wanted to say goodbye, but he doesn’t plan to quit “in the near future.” Trebek will spontaneously ask producers for an extra 30 seconds at the end of the show to say goodbye, saying he’ll do it “on a whim.”