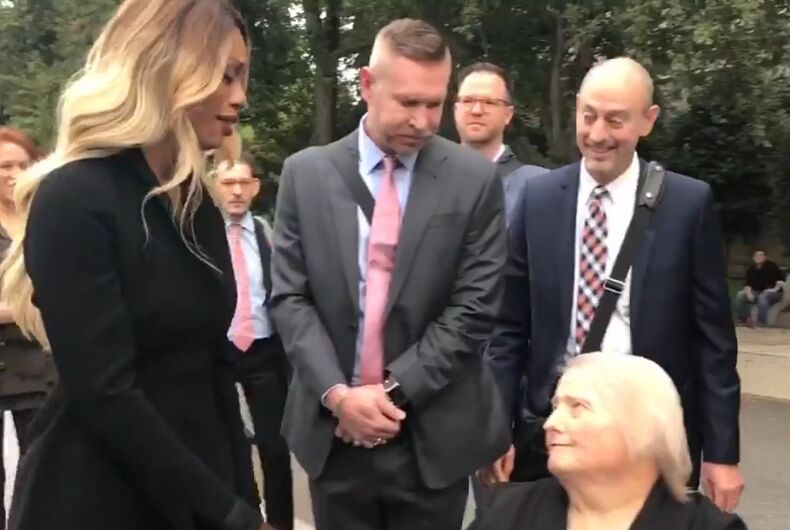 Detroit’s R.G. & G.R. Harris Funeral Homes has settled a lawsuit brought by former employee Aimee Stephens for anti-transgender discrimination. The case ended up at the Supreme Court and was one of three cases that established that LGBTQ people are covered under federal civil rights laws.

Stephens passed away shortly before the ruling was announced. The company settled with her estate.

The company will pay Stephens’ estate $130,000 for lost wages and damages and $120,000 to the ACLU Foundation to repay the cost of litigation and attorney fees.

“We are pleased that all sides were able to come to an agreement regarding damages and attorney fees,” said Jay Kaplan, Stephens’ attorney. “The settlement of this case is bittersweet in that Aimee passed away before matters could be resolved.”

Other standard settlement agreements like doing nondiscrimination training and posting government fliers about what constitutes discrimination and how to file a complaint were also included.

Stephens, Gerald Bostock, and Donald Zarda fought LGBTQ discrimination in three cases that led to the landmark Supreme Court decision that held that job discrimination based on gender identity or sexual orientation is illegal under Title VII of the Civil Rights Act of 1964.

Bostock was a child welfare coordinator in Clayton County, Georgia’s juvenile court system when he was fired – after joining a gay softball league – under the pretense of “conduct unbecoming” an employee. His lawsuit was initially dismissed because courts said that Title VII doesn’t include sexual orientation as a protected class, which he challenged.

This coincided with Zarda’s lawsuit against his former employer, Altitude Express Inc., who fired him from his job as a skydiving instructor after he told a student that he was “100% gay.”

Stephens announced her transition at the funeral home she worked at and was fired weeks later after being told by her employer that she was “violating God’s commands.” She was represented by the EEOC who argued that she faced discrimination “because of sex” that was banned by Title VII.

Justice Neil Gorsuch’s majority opinion in the consolidated Bostock v. Clayton County ruling said, “An employer who fired an individual for being homosexual or transgender fires that person for traits or actions it would not have questioned in members of a different sex.”

Bostock was the only defendant who lived to see the 6-3 Supreme Court ruling in favor of LGBTQ equality.