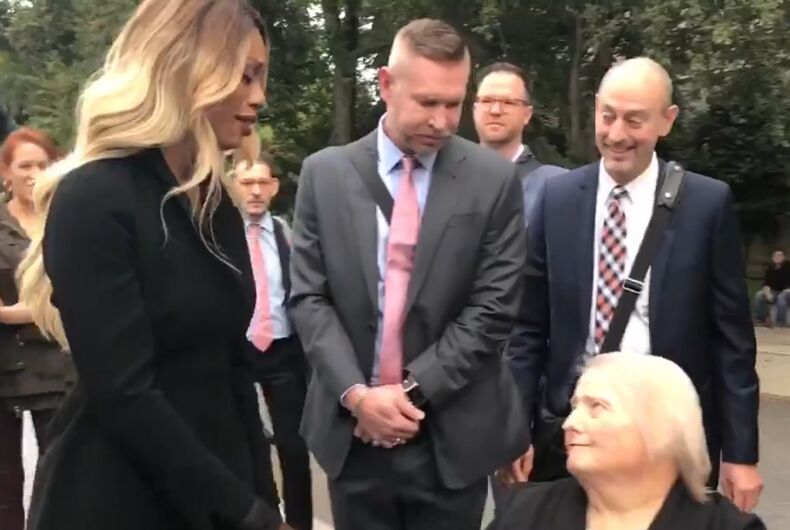 Aimee Stephens, the transgender woman with an employment nondiscrimination case currently before the Supreme Court, has died at 59.

The court heard arguments in Stephens’ case, along with two other discrimination cases, in October. A ruling could come as early as this week.

“Thank you from the bottom of our hearts for your kindness, generosity, and keeping my best friend and soulmate in your thoughts and prayers,” Stephens’ spouse, Donna, said in an emailed statement. “Aimee is an inspiration. She has given so many hope for the future of equality for LGBTQ people in our country, and she has rewritten history. The outpouring of love and support is our strength and inspiration now.”

Stephens was fired from her job as a funeral director after she came out to her employer as trans. Her case challenges the firing, saying her rights were violated based on protections against sex discrimination.

Her case, if successful, would uphold some employment discrimination protections for transgender people. Stephens’ case was consolidated with two other cases that involve gay people who are suing for the same protections.

The ACLU helped Stephens file a complaint with the federal Equal Employment Opportunity Commission (EEOC). The EEOC sued the funeral home on her behalf, and the Sixth Circuit Court of Appeals ruled that she was unlawfully fired and that federal sex discrimination laws protect transgender people.

After losing in court multiple times, her former employer petitioned the Supreme Court hoping that the court will give them a different decision. Stephens’ death will not change the outcome of the case.

“Aimee did not set out to be a hero and a trailblazer, but she is one, and our country owes her a debt of gratitude for her commitment to justice for all people and her dedication to our transgender community,” Chase Strangio, deputy director for Trans Justice with the ACLU’s LGBT & HIV Project and a member of Aimee Stephens’ legal team, said.

“When Aimee decided to fight back after she was fired for being transgender, she just wanted it to be acknowledged that what happened to her was wrong. Being a part of Aimee’s team at the Supreme Court has been one of the proudest moments of my life because of the amazing person behind the case. As a member of her legal team, I am deeply sad for this loss. As a transgender person and an advocate, I am filled with both grief and rage that we have lost an elder far too soon. As we, and millions, carry her work for justice forward, may she rest in power and continue to guide us on this path.”

“Aimee Stephens is a hero in the fight for equal rights for all people,” said Mara Keisling, executive director of the National Center for Transgender Equality. “Aimee was fired for being transgender, and she chose to stand up for herself and for all transgender people. She took her fight all the way to the US Supreme Court. Aimee was deeply committed to justice and fairness, and an incredible person. She has left us too soon.”

Stephens’ family announced earlier this week that she was receiving hospice care at home after a long battle with kidney disease.  Friends set up a fund to cover end-of-life and burial expenses.

“Aimee Stephens just wanted to continue to do the job she was hired to do, that she was good at, and that she was prepared to continue while living as her true gender,” Brian K. Bond, Executive Director of PFLAG, said in an emailed statement. “It is with heavy hearts that we at PFLAG mourn Aimee’s passing. Her fight will continue as we strive for equality for all, inclusive of sexual orientation and gender identity.”

“Like so many LGBTQ working people, Aimee just wanted to do her job and be her authentic self,” Jerame Davis, Executive Director of Pride At Work added. “Her fight for equality gave hope to transgender working people around the country and provided inspiration to all LGBTQ working people. Aimee’s fight continues as the Court could rule any day on her case. We must take up the fight she cannot finish and ensure every LGBTQ working person can obtain the dignity and respect they deserve.”

“Thank you, Aimee, for your courage to stand up and be yourself. Your voice will be missed, but your cause will win the day.”

Indonesia may criminalize homosexuality. The punishment would be exorcism.