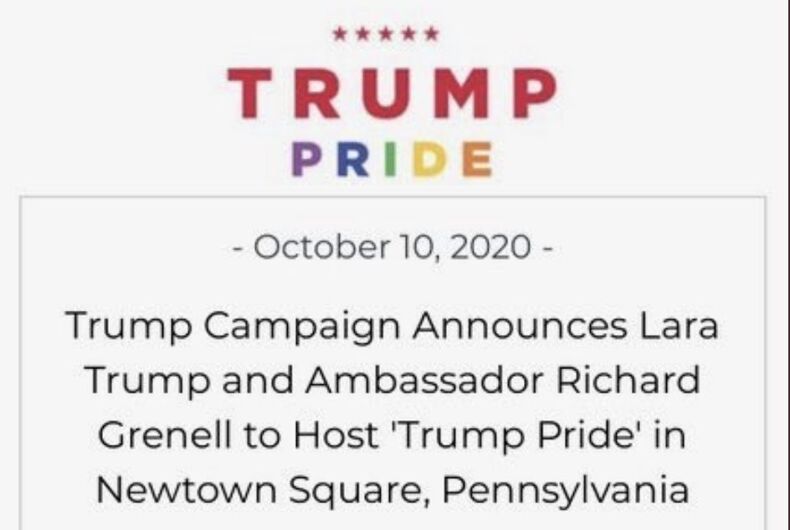 The Trump campaign continues their attempt to woo LGBTQ voters by announcing it will hold a “Trump Pride” rally in Pennsylvania on Tuesday, October 13 – National Herpes Awareness Day.

But according to a copy of the invite shared on Twitter, neither the words “gay” nor “LGBTQ” appears in the announcement.

Lara Trump and former ambassador to Germany Richard Grenell will host the event according to an announcement shared by Michelangelo Signorile.

“Look at this closeted event,” Signorile tweeted with the screenshot, “in which neither ‘gay’ nor ‘LGBTQ’ is mentioned, Trump himself is not involved, and the whole thing is in code: ‘Pride’ in rainbow letters.”

“They’ve not announced this anywhere, lest the religious right find out,” he continued. “Meanwhile, they’re trying to put a woman on the Supreme Court who will destroy marriage equality.”

Confirmation hearings will start tomorrow for Amy Coney Barrett, President Trump’s nominee for the Supreme Court. Barrett has an impeccably anti-LGBTQ record, and her confirmation to the Court will cement its right-wing bias for years to come.

Look at this closeted event, in which neither “gay” nor “LGBTQ” is mentioned, Trump himself is not involved, and the whole thing is in code: “Pride” in rainbow letters. pic.twitter.com/AnXXO8M8lh