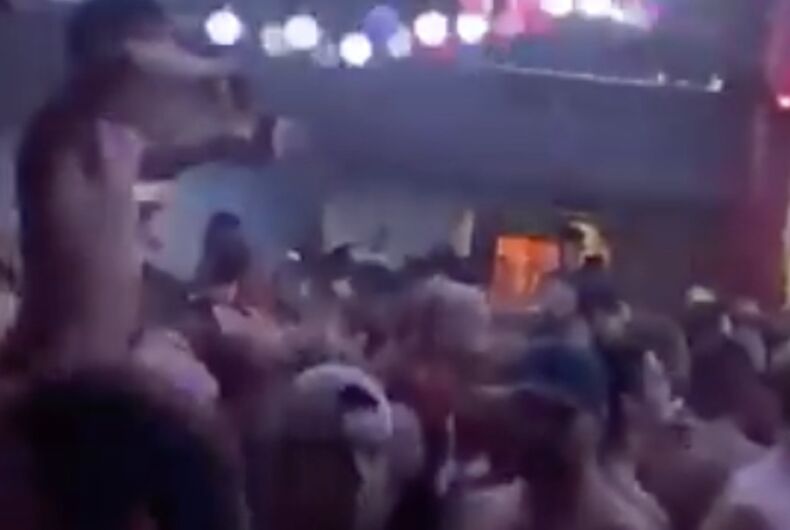 A man died at an unofficial Atlanta Pride event this weekend in Georgia.

While the official Atlanta Pride events were all virtual due to the ongoing COVID-19 pandemic, videos of the unofficial parties show hundreds of men packed into clubs without face masks or social distancing. Social media users have blasted the venues and party promoters as irresponsible.

The man died in the basement of a club named BJ Roosters during a 3 a.m. to 7 a.m. circuit party called Xion. The man’s partner told WXIA-TV that he had taken ecstasy pills at the event. He was pronounced dead at Piedmont Hospital on Sunday morning, but no other details about him have been released.

“The venue was packed, to overcapacity at times,” a party attendee said in a statement sent to LGBTQ Nation. “There were no protocols in place, clearly no EMTs on-site, and staff there seemed unprepared to handle anything of the sort. It was a minimum of 30 minutes before an ambulance arrived, and I’m being generous. It was tragic. I’ve been to parties all over the world, I have never been to one without EMTs In my opinion this could have been avoided.”

The attendee added that the victim was a Black man in his 40s or 50s, that onlookers did CPR for over 10 minutes but the man remained unresponsive. The attendee also described the club as oversold, packed, and “super hot.”

An unofficial Atlanta Pride party was also reportedly held at another gay venue named Future. LGBTQ Nation contacted Keith Allen Young, District, and Future for comment. Future Atlanta replied, “We are a new business under construction and not open.” LGBTQ Nation asked follow-up questions of the venue. The others had not responded by the time of publication.

Prominent social media users criticized the events, including gay Big Brother season 15 winner Andy Herren, who posted a video and wrote, “Taken last night at Atlanta Pride. And publicly posted to Instagram. In the middle of a pandemic. People can be so shitty and selfish. Please don’t be like these people. This is appallingly gross.”

Taken last night at Atlanta Pride. And publicly posted to Instagram. In the middle of a pandemic. People can be so shitty and selfish. Please don’t be like these people. This is appallingly gross. pic.twitter.com/SDafZ0HXfC

Gay YouTuber Tyler Oakley also wrote in a tweet, “atlanta pride last night… what are y’all UP TO… i get that people miss how carefree we used to be able to be… i do too!! but the pandemic isn’t over just because you’re over it.”

atlanta pride last night… what are y’all UP TO… i get that people miss how carefree we used to be able to be… i do too!! but the pandemic isn’t over just because you’re over it pic.twitter.com/ySPmNIgHmA

Two former performers from the reality TV drag competition RuPaul’s Drag Race, Nina Flowers and Detox, were both criticized for performing at two of the unofficial parties. Detox defended her participation by stating that she only participated out of a desperate need for money and personally practiced mask-wearing and hand-sanitizing during the event while encouraging others to do so.

Another former Drag Race contestant, Kameron Michaels, wrote in a now-deleted tweet, “So we gonna name names or what? The fact that the rest of us gave up our normal pride festivities, our birthdays, etc. because we’re not selfish and stupid; yet here ya’ll are acting like it’s over. Do you know how bad I want to go to a club and go dancing? All of us do. Fuck you.”

In a statement, Atlanta Pride wrote that it held no official in-person events even though social media users have tagged the organization in posts about the unofficial events. It also encouraged everyone to remain safely at home, wear masks, and practice harm reduction to help the community survive the pandemic.