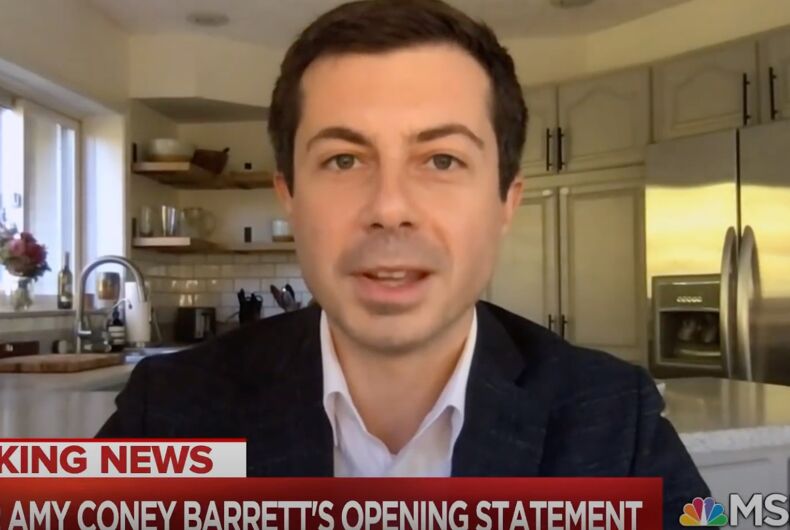 Out former presidential primary candidate Pete Buttigieg has proven himself to be a valuable tool for Democratic nominee Joe Biden’s campaign. The quick-witted politician, the former mayor of South Bend, Indiana, has made headlines for his snappy comebacks and sharp critiques of the Trump administration.

A copy of far-right Supreme Court nominee Amy Coney Barrett’s opening testimony was released as Buttigieg appeared on MSNBC yesterday for National Coming Out Day, and even with only seconds to react after being the read the text, he still managed to eviscerate the nominee – and he did it with a smile.

Related: With Amy Coney Barrett on the Supreme Court, could marriage equality be in jeopardy?

“Courts are not designed to solve every problem or right every wrong in our public life,” Barrett will say. “The policy decisions and value judgments of government must be made by the political branches elected by and accountable to the People. The public should not expect courts to do so, and courts should not try.”

“A judge must apply the law as written, not as the judge wishes it were,” she continues. “Sometimes that approach meant reaching results that he did not like. But as [former Supreme Court Justice Antonin Scalia] put it in one of his best-known opinions, that is what it means to say we have a government of laws, not of men.”

Barrett clerked for Scalia as a law student and touts the influence the conservative Justice had on her.

“This is what nominees do,” Buttigieg said after host Jonathan Capehart read him part of the statement. “They write the most seemingly unobjectionable, dry stuff. But really what I see in there is a pathway to judicial activism cloaked in judicial humility.”

“At the end of the day, rights in this country have been expanded because courts have understood what the true meaning of the letter of the law and the spirit of the constitution is,” he continued. “That is not about time-traveling yourself back to the 18th century and subjecting yourself to the same prejudices and limitations as the people who write these words.”

“The constitution is a living document because the English language is a living language. And you need to have some readiness to understand that in order to serve on the court in a way that will actually make life better.

“It was actually Thomas Jefferson himself who said that ‘We might as well ask a man to still wear the coat which fitted him when he was a boy as expect future generations to live under’ — what he called — ‘the regime of their barbarous ancestors.'” Buttigieg quipped.

“So even the founders that these kind of deadhand originalists claim fidelity to understood better than their ideological descendants — today’s judicial so-called conservatives — the importance of keeping with the times. And we deserve judges and justices who understand that.”

Historical photos of men in love: The photo booth as a safe space