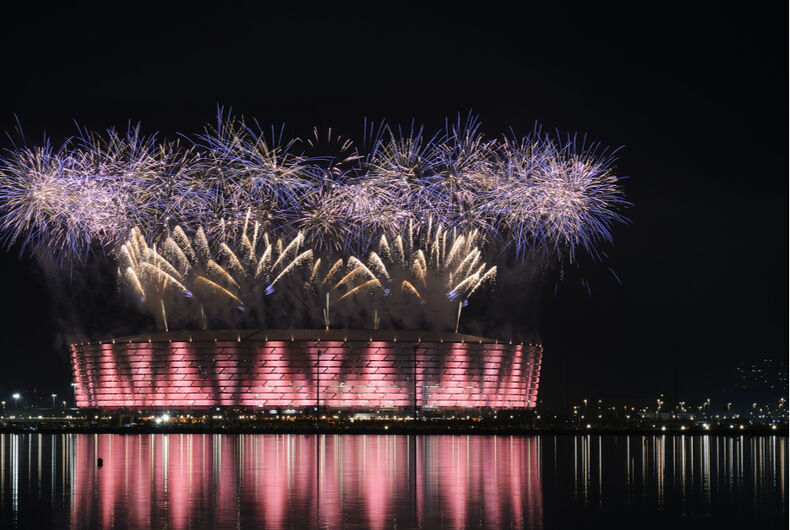 Fireworks explode above the stadium during the Closing Ceremony for the Baku 2015 European Games.Photo: Shutterstock

Hosting the summer or winter Olympics is a coveted honor despite the financial burden it imposes on the cities. And Olympics-affiliated regional events like the European Games have also become a feather in the cap of the host country.

With the announcement that the 2023 European Games will be held in Krakow, Poland, people are starting to ask why the Olympics committee keeps honoring the most anti-LGBTQ areas in the world? The region has declared itself an “LGBTQ-free zone.”

Related: How did violence against LGBTQ people in Poland get so aggressive suddenly?

Krakow is in the Malopolska region. The area declared itself opposed to “LGBTQ ideology” last year in the run-up to Polish President Andrzej Duda’s reelection. The city itself has not issued a similar proclamation, but the games will be held throughout the region.

The decision is causing backlash – and not just from the LGBTQ community.

“The European Games is an Olympic event and as such it should uphold the values of excellence, respect and friendship,” Liz Barker, a member of Britain’s House of Lords, told Reuters. “Since the Malopolska region of Poland has declared itself an ‘LGBT-Free zone,’ it is no longer fit to host this event.”

“The European Olympic Committee (EOC) has sought assurances from the organizers of Krakow-Malopolska and the highest levels of government that the fundamental principles of the Olympic Charter will be fully respected,” EOC spokeswoman Donatella Del Gaudio said in response.

Del Guadio said provisions on human rights and nondiscrimination would be included with the contract to host the games.

But Olympic officials also tried to reassure the world that human rights would be respected when games were held in China and Russia. They were not successful.

The German president boycotted the Russian Winter Olympics in Sochi and the games are most memorable for the outcry over the country’s record on LGBTQ rights. Numerous worldwide campaigns highlighted the Russian government’s atrocious history of persecuting queer people.

Four gay activists were arrested on the first day of the Sochi Olympics alone.

The ongoing discrimination and violence LGBTQ people face in Russia have been exported around the region. Russian President Vladimir Putin recently won reelection by campaigning against LGBTQ people. Like the Polish president’s election, both have been tarnished with allegations of fraud and intimidation.

Donald Trump called the Polish leader after the election to congratulate “my friend.”

With Amy Coney Barrett on the Supreme Court, could marriage equality be in jeopardy?