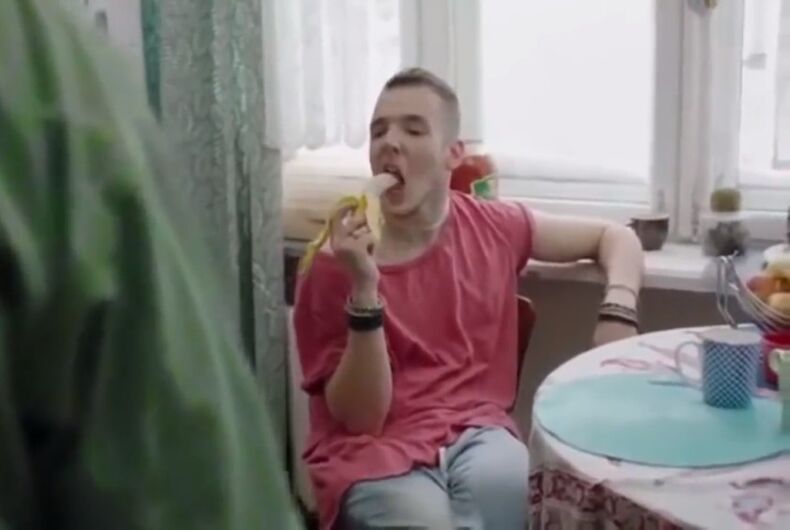 Homophobia is endemic in Putin’s Russia. So it’s not surprising that it’s being used as a get-out-the-vote tactic in a slick video that seems clearly aimed at promoting Putin’s agenda in advance of next month’s election.

In the video, a middle-aged man argues with his wife as she sets the alarm to get up early to vote the next day. “As if they won’t elect someone without you,” he says.

What follows is a nightmare of the personal consequences for not voting. Soldiers (conspicuously including a black one) arrive to draft him into the military, since the age of conscription is now 60. His young son is a Communist scout. Even the number of visits to the bathroom is limited by law.

But the centerpiece of the ad is a law that requires Russians to take in gay houseguests. The ad then shows a flamboyant young man filing his nails with a rainbow-colored file. “The law is the law,” he says.

To drive home the point, the gay character deepthroats a banana. To make the nightmare even worse, the wife informs her husband that if the gay houseguest doesn’t find a boyfriend, “you will have to be with him instead.” Nothing like a dose of good old-fashioned gay panic.

As an added twist, the alarm goes off and the husband thinks that he is awake. But instead of his wife next to him, he finds the gay houseguest, who rolls over and puts his arms around the husband. Then the real alarm goes off. The husband rushes off to vote “before it is too late.”

The ad uses famous Russian actors and has high production values, a sign of the money put into the effort. Putin already has the election in the bag, but one of his nominal opponents, Ksenia Sobchak, a liberal journalist, called the video “an incitement to hatred.”

The actress who plays the wife in the video says she has no idea who is behind it, but dismissed the allegation of homophobia: “This is simply a humorous promo, so what?”

In many ways,the video would play well with Trump’s base. A multicultural army, a gay home invasion, a child under control of the state, intrusive regulations–the Russian ad seems like a template for the grievances of the voters who chose Trump.

Given Russian meddling in our elections, don’t be surprised if we don’t see a version of it in 2020. In the meantime, here’s the original.

Students are becoming the teacher when it comes to gun control