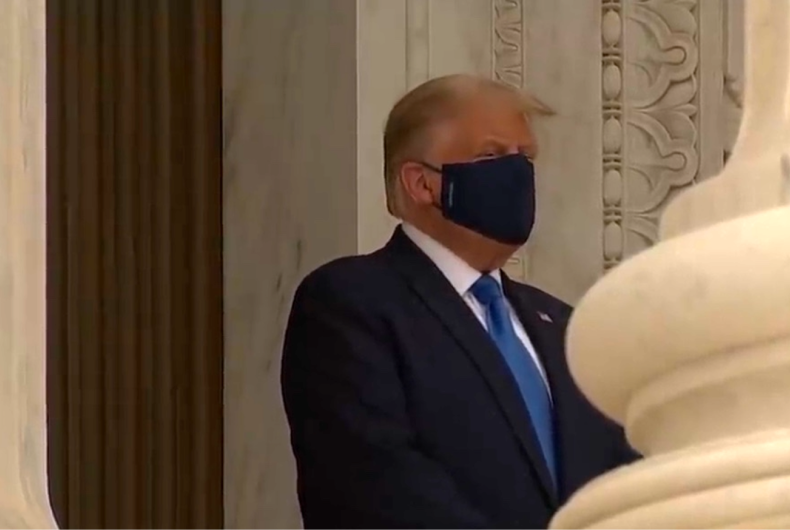 Donald Trump visiting the Supreme Court to remember late justice Ruth Bader Ginsburg, who laid in honor there on September 24, 2020 before she laid in state at the U.S. Capitol.Photo: Screenshot / C-SPAN

Update (09/27): This afternoon, Donald Trump formally nominated Barrett and introduced her at a press conference in the White House Rose Garden. Trump said his nominee is ” a woman of …sterling credentials and unyielding loyalty to the Constitution.”

Trump has announced his nominee for the Supreme Court – Amy Coney Barrett, a darling of conservatives and the anti-gay, anti-abortion right.

Following Justice Ruth Bader Ginsburg’s death last week, President Donald Trump wasted no time in nominating a replacement. With the presidential election looming, Trump hopes to fill his third seat on the highest court in the land as it may be his last opportunity if Joe Biden is elected on November 3.

Related: Supreme Court will hear case to decide if adoption agencies can discriminate in November

If Barrett is confirmed, it would give the 9-judge court a six to three conservative majority. That will have major impacts on the future of LGBTQ equality, which Ginsburg championed and helped usher in during her 25 years on the court.

Trump, who is languishing badly among female voters, clearly hopes his choice of Barrett will boost his standings in the polls. But the staunchly anti-abortion and anti-gay jurist is unlikely to do more than solidify his standing with his right-wing base. Polls show a majority of Americans believe the next president should determine Ginsburg’s replacement.

Barrett, considered an “originalist” who claims to strictly interpret the Constitution as she thinks it intended in 1787, was confirmed to the U.S. Court of Appeals in 2017. At that time, she came under fire for signing onto a 2015 letter opposing marriage equality by the Ethics & Public Policy Center for Catholic Women, in response to the Obergefell v. Hodges Supreme Court ruling that made it the law of the land. If confirmed by the Senate, Barrett will be the sixth Catholic on the high court.

Her conservative interpretation of the Bible, which she uses in interpreting the Constitution, came up in her Senate confirmation hearings, with Sen. Dianne Feinstein charging that “the dogma lives loudly within you.”

A former clerk of anti-gay Supreme Court Justice Antonin Scalia, Barrett’s opposition to marriage equality, Obamacare, and abortion rights are redeeming qualities for conservatives but not so much for the majority of the nation, which overwhelmingly supports all three.

In preparation for Barrett’s nomination, Lambda Legal CEO Kevin Jennings said in a statement that “it is impossible to overstate how much is at stake, not only for LGBTQ people and everyone living with HIV, but for our entire country.

Lambda also pointed to her role in refusing to hear a case involving the segregation of Black workers at the company AutoZone and her speeches at the Alliance Defending Freedom (ADF), a SPLC-designated hate group, as red flags that should be explored at her confirmation hearings.

The senate GOP majority’s eagerness to approve a new justice comes in contrast to President Barack Obama’s futile attempt to get a Senate hearing for Merrick Garland in 2016, following the death of Justice Antonin Scalia. At that time, Republicans refused to vote on Garland’s nomination and kept it off the Senate floor until Trump came into office 10 months later, claiming that the new president should decide the fate of the court.

This time, Republicans have already made it known that they will vote on Trump’s nominee – which is being made 38 days before the 2020 election. Some have even voiced support for the nominee before hearings on her qualifications and her claim to be able to interpret the will of the authors of the U.S. Constitution verbatim.

Only 51 Senate votes are needed to confirm a Supreme Court pick and Vice President Pence can cast the deciding vote if necessary. There are currently 53 Republican senators. Two Republicans have said they will decline to vote before the election determines the next president.

Ruth Bader Ginsburg is the first woman & the first Jew to Lie in State. It’s about time.