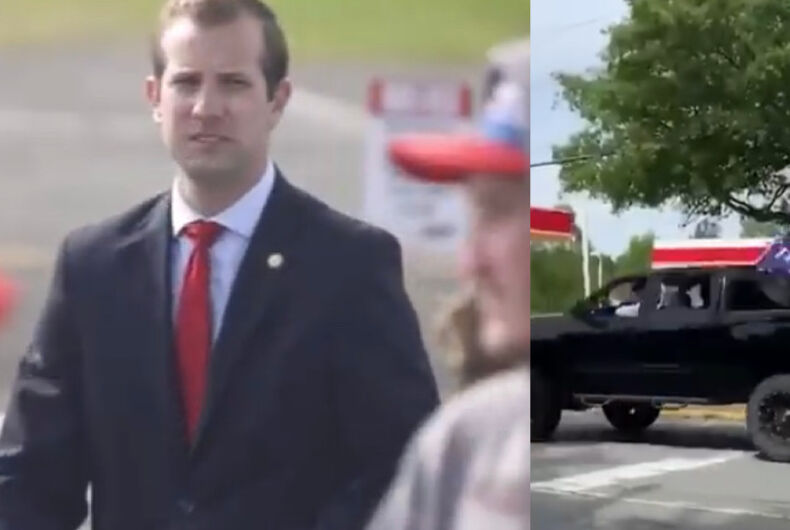 A Republican preacher that spoke at a rally in support of President Donald Trump last weekend, was subsequently caught yelling in support of white supremacy shortly after.

Jesse Hursey of Elon, North Carolina, was driving a pickup truck following the Trump rally when he appeared to yell the phrase in response to seeing a person holding a Black Lives Matter sign. He denies being the person who said it, despite video evidence and being identified by several people at the rally.

The Trump rally was held the day after Justice Ruth Bader Ginsburg passed away. It was organized for truckers by The Young Republicans of Alamance County, held at ACE Speedway. There, Hursey reportedly told the crowd from the track: “First of all, I’m a Christian. Second of all, I’m a Republican. And in that order.”

Following the event, about 200 of the truckers drove through Elon University in parade fashion. It was led by Gary Williamson, described as the founder of a “neo-Confederate” hate group who expressed support for Kyle Rittenhouse, a 17-year old accused of murder in Kenosha, Wisconsin. There, Hursey was one of many to join in openly calling for white supremacy.

Young Republicans distanced themselves from his actions, with chairman T.L. Mann telling the News & Observer that “[Hursey] has been immediately removed from our organization.”

One local Confederate woman wore a shirt praising Trump for being "someone with balls" while inexplicably wearing a black cock and balls as a mask. pic.twitter.com/50qSAEvUS7

Hursey also told the same outlet that he had people that could vouch that it was not him in the videos, but did not follow up with actual evidence or names.

His father – who operates a local restaurant chain known as Hursey BBQ – also claims that Hursey was not the one to yell the phrase. Elon University professor Megan Squire, who researches extremists and their motivations, was one (among others) to catch him directly yell the phrase on video.

In fact, the phrase was directed at her while she held a “Black Lives Matter” sign.

The younger Hursey is the pastor of the Bynum Baptist Church, which – like its leader – went dark online and hid their internet presence. The Pittsboro, NC church describes the 28-year-old as someone “converted and called to the ministry in the ‘Burlington Revival’ meeting” on its website before it was taken offline.

The ‘Burlington Revival’ were a series of events at a tent in Burlington, N.C. in 2016 where evangelists ‘saved’ their followers, although there was reportedly no preaching or even mention of scripture from the Bible at the events. Instead, the event was hours of people spouting “Charismatic phraseology…claiming a special anointing,” one viewer wrote. Although the Billy Graham-associated revival organizers had $300,000 reportedly raised for a new tent, they ended the events after 11 straight weeks and intense criticism by even fellow Christian leaders.