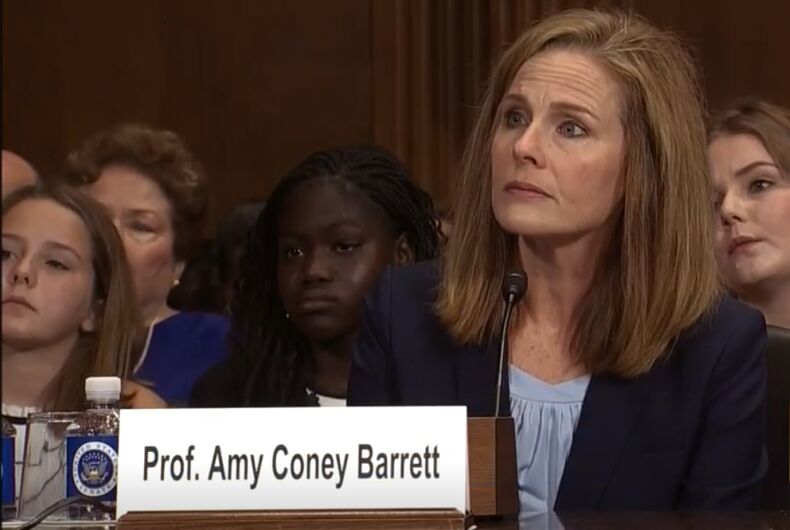 The Senate Judiciary Committee voted to approve Donald Trump’s nomination of Amy Coney Barrett to the Supreme Court, allowing the full Senate to vote on her nomination.

“We will not grant this process any further legitimacy by participating in a committee markup of this nomination just twelve days before the culmination of an election that is already underway,” Senate Minority Leader Chuck Schumer (D-NY).

Donald Trump has said that he wants Barrett to be approved and sworn in as a Supreme Court justice before the November 3 elections so that she can rule on matters related to the election and how ballots are counted.

“This has been a sham process from the beginning,” said a statement from the Senate Democrats on Barrett’s nomination. “Amidst a global pandemic and ongoing election, Republicans are rushing to confirm a Supreme Court Justice to take away health care from millions and execute the extreme and deeply unpopular agenda that they’ve been unable to get through Congress.”

Schumer is expected to announce that Democrats will boycott the full Senate vote on Barrett’s nomination, calling her views “so far out of the mainstream.”

“We’re not giving the quorum they need to provide [a vote on Barrett’s nomination]. The rules require it,” Schumer said.

Some Senate Republicans, including Senate Judiciary Committee Chair Lindsay Graham (R-SC), have argued that the Senate rules only require that a majority be present for a quorum.

Barrett is 48-years-old and could serve on the high court for several decades. Her opposition to women’s rights and health care have led Democrats to say that she may overturn Roe v. Wade and the Affordable Care Act.

While she hasn’t ruled on major LGBTQ rights cases, Barrett has a history of anti-LGBTQ comments. In 2015, she signed a letter opposing marriage equality, which said that it goes against the Catholic teaching on “the meaning of human sexuality, the significance of sexual difference and the complementarity of men and women.”

In a 2016 panel discussion, Barrett said that the idea that federal civil rights laws that ban discrimination “because of sex” also ban discrimination against transgender people – who face discrimination because their sex assigned at birth does not align with their gender identity – is a “strain the text” of federal law. The reasoning is the basis of the landmark LGBTQ Supreme Court victory in Bostock.

Over the last ten years, she gave speeches for the anti-LGBTQ hate group Alliance Defending Freedom and was paid by the organization five times. The CEO of the hate group attended her nomination ceremony and told his followers to “pray” for her “rapid confirmation.”

And at her Senate confirmation hearings last week, she repeatedly referred to sexual orientation as “sexual preference,” which suggests she believes sexual orientation can be changed. She also refused to say whether or not she believes LGBTQ people are entitled to the same due process and equal protection rights as straight, cisgender people when it comes to marriage.

She also served as the trustee of a religious school system that bans LGBTQ students, parents, and faculty, teaching that homosexuality is an “abomination” and that gay men “rightly” go to hell when they die.