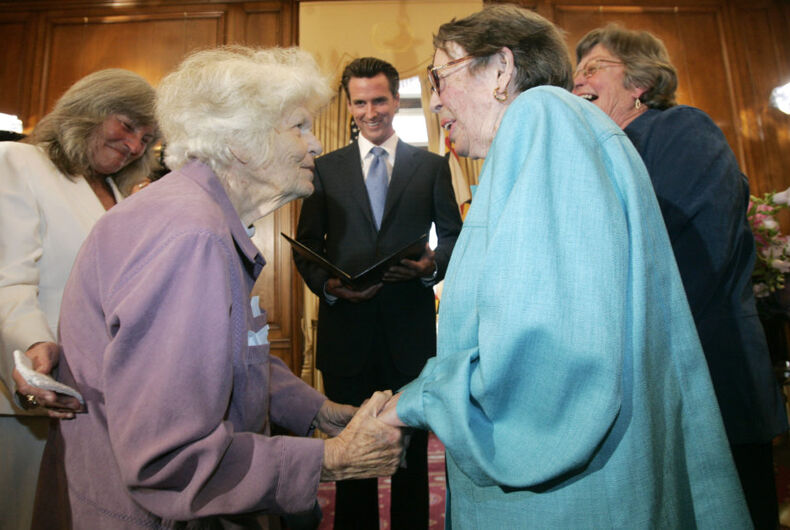 A San Francisco supervisor has vowed to landmark the home where the late lesbian pioneering couple Phyllis Lyon and Del Martin lived throughout most of their 54 years together.

Historic preservationists, friends of the couple, and Lyon and Martin’s daughter held a Zoom call on September 24 to discuss designating the house at 651 Duncan Street in the city’s Noe Valley neighborhood as a historic site. Gay District 8 Supervisor Rafael Mandelman said during the call that he would seek granting historic status to the property.

Related: Historical photos of men in love: The photo booth as a safe space

“I do think this is clearly a home of historic value and needs to have that recognized and honored over time. Whatever we can do to help with that effort, we are happy to do,” said Mandelman, who represents Noe Valley at City Hall and is the lone LGBTQ member of the board.

Mandelman legislative aide Jacob Bintliff, a gay man who formerly worked for the city’s planning department, added, “It is something we are very interested in moving forward with, and pretty quickly too.”

On Tuesday, September 29, Mandelman’s office submitted the necessary resolution to trigger the approval process. It will be taken up by the supervisors’ land use committee in mid-October and, if passed by the full board, then sent to the city’s historic preservation commission for a vote before being sent back for a final vote by the supervisors.

Mike Buhler, president of San Francisco Heritage, said during the virtual meeting that the local preservation group was supportive of seeking city landmark status for the Lyon-Martin house. He noted that one advantage of having a supervisor introduce landmark legislation is it requires the historic preservation commission to make a decision within 90 days.

“This is a uniquely important site,” said Buhler.

After first meeting in Seattle in 1952, Lyon and Martin moved to San Francisco. As recounted in the city’s LGBTQ historic context statement released in 2015, Lyon moved first and found a flat in what is now the Castro district in which Martin moved into on Valentine’s Day 1953.

Two years later they bought the 756 square foot home atop a steep hill in Noe Valley. As Lyon recounted to Shayne E. Watson, a lesbian and architectural historian who co-wrote the citywide LGBTQ report, their only requirement when house hunting was to buy one “with a view.”

Their home would become a gathering place within the city’s lesbian community and the site of various meetings and events. House Speaker Nancy Pelosi (D-San Francisco) addressed one gathering there while standing on the staircase of the two-level cottage reportedly built in 1908.

Journalists and co-founders of the Daughters of Bilitis, the first political and social organization for lesbians in the United States, Lyon and Martin made history again in 2004 when they were the first couple to be married by San Francisco officials in defiance of California’s prohibition of same-sex marriage.

When the state Supreme Court tossed out the homophobic law, the women were the first same-sex couple to legally marry in California on June 16, 2008. Weeks later, on August 27, Martin died at the age of 87 in San Francisco with Lyon at her side. This past spring Lyon died at the age of 95 on April 9.

Earlier this month the news website SF Gate reported that their home had sold for $2.25 million. The 5,700 square foot lot was two parcels sold as one; the women had tended a garden on the adjoining lot.

“The views are iconic SF, from this last parcel of undeveloped land atop Noe Valley,” noted the article’s author, Anna Marie Erwert. “Homes in this area have easily sold for $5-6M, so as long as a person keeps construction costs under control, a turn over of this property could be very profitable.”

Property records show the buyer was David R. Duncan. The Bay Area Reporter was unable to reach him for comment.

Local preservationists had approached Lyon and her family about the possibility of landmarking the house years ago but the process was never initiated. Watson and Donna Graves, a public historian based in Berkeley who co-authored the citywide LGBTQ context statement, had included the Lyon-Martin house on a list of LGBTQ historic properties they identified as likely eligible for designation as a city landmark and listing on California and national registers of historic places.

While the state and federal listings are largely honorific, a city landmark designation would provide a level of protection to the property should its new owners submit plans to raze it in order to build a larger structure. While a property owner can seek historic landmark status, a member of the Board of Supervisors or the city’s planning department working with the historic preservation commission can also seek to add a property to the list of 288 local landmarks currently in San Francisco.

To date, San Francisco has granted city landmark status to only four sites for their importance to LGBTQ history. Two are gay bar locations, one the former home to the AIDS Memorial Quilt, and the fourth was the late gay supervisor Harvey Milk’s residence and former Castro Camera shop at 573 Castro Street.

All are located in commercial corridors. The Lyon-Martin house would be the first LGBTQ historic site in a solely residential neighborhood.

“I can see it in the future be a destination as an archival site for GLBTQ rights and women’s rights here in San Francisco,” said Terry Beswick, executive director of the GLBT Historical Society whose archives house the papers of Martin and Lyon.

Beswick and Watson, who used to chair the society’s historic places working group, helped organize last week’s meeting about how to preserve the couple’s cottage. As for the vacant portion of the property, Beswick said it “would be a lovely park to go with the house.”

Matthew S. Bajko is an assistant editor at the Bay Area Reporter.