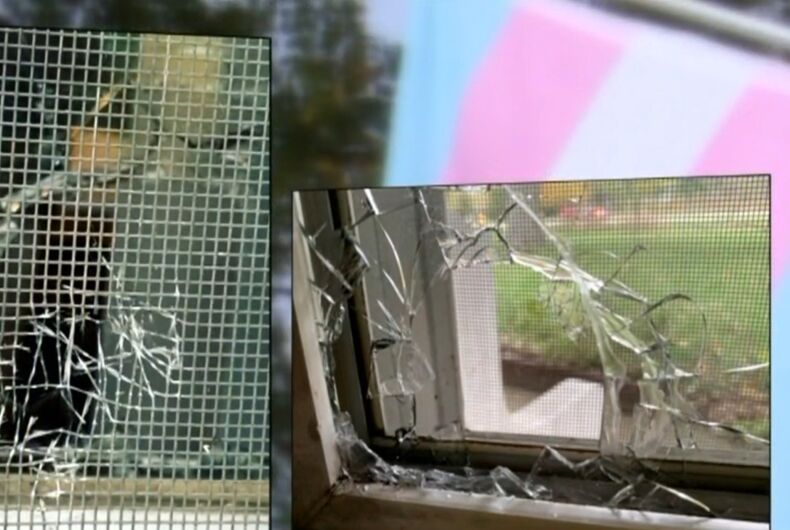 A bullet was fired through the window of an Allendale couple's homePhoto: Screenshot

Allendale, Michigan residents Jady Morelli and Amy Russell have endured years of anti-transgender vandalism. Their rural home has been targeted repeatedly, but a recent incident has ratcheted up the stakes.

A shot was fired through the couple’s window. Fortunately, Morelli and Russell were uninjured.

Related: That time activists unfurled a giant trans flag at the Lincoln Memorial

“This is assault and it could’ve killed someone,” Russell told WOOD-TV.

The Ottawa County Sheriff’s Office said that there isn’t much evidence to go on, but hunting and practice shooting is common in the area. The women, however, point out that this isn’t the first time they’ve been the target.

“Ever since we put the transgender flag up, we’ve had our property vandalized and it’s a hard thing to go through,” Morelli said. “It just brings it right home that there are people out there who want to hurt you for who you are.”

In 2017, the trans flag was ripped in half before being replaced. In 2019, the shutters on their home were ripped off after they were painted in trans flag colors.

A mailbox on their property was also demolished shortly after being installed. While it belonged to their elderly neighbor, the couple believes the vandals assumed it was theirs.

“Everybody should and has the right to express themselves,” Morelli said. “This is not meant to be a threat to anybody. It’s just a statement to other people out there like me: We exist.”

They say it is even more important to be visible in a rural community so young people know they aren’t alone.

“Honestly it’s not about cis people. It’s for other trans people, especially trans kids in this community,” Russell said. “They need to know they’re not alone. Jady grew up knowing what it’s like to feel alone.”

“I think flying a trans flag and having shutters painted trans colors … it’s something I can do for people who may be closeted, who go by every day in the school bus and they see that and they go, ‘There’s somebody like me in this community,’” Morelli added.

The couple says they do not plan on being any less visible despite the ongoing vandalism.