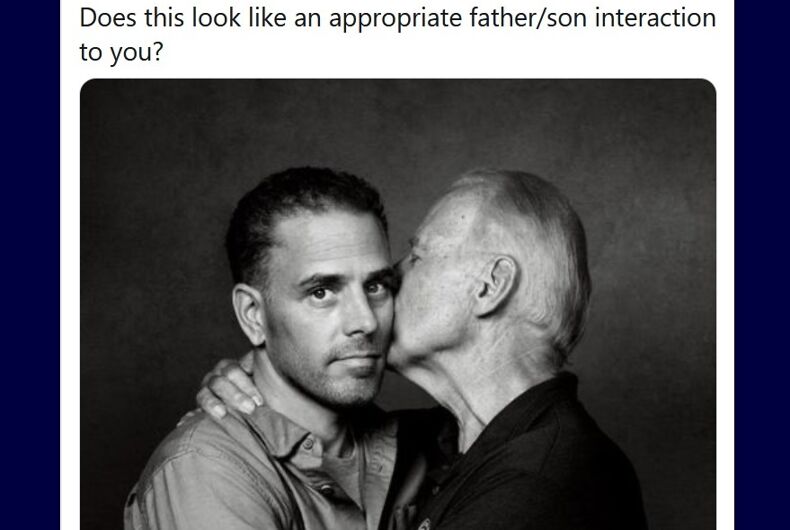 A Donald Trump supporter tried to attack Joe Biden for kissing his son on the cheek and Democrats on Twitter responded en masse with support for fathers who love their sons.

John Cardillo, a former NYPD officer who is now a Newsmax TV host, tweeted a picture of Joe Biden kissing his son Hunter on the cheek.

Related: NBA star Dwyane Wade says it’s ‘my job as a father’ to support his son at Pride

“Does this look like an appropriate father/son interaction to you?” he asked.

Does this look like an appropriate father/son interaction to you? pic.twitter.com/XDMIsgjUKI

Some background: Joe Biden’s first wife Neilia and their daughter Naomi died in a car accident in 1972, and their two sons Beau and Hunter were injured in the accident but survived. Beau died of brain cancer in 2015, and Hunter has struggled with alcohol and drug addiction.

On Twitter, people – both queer and straight – were quick to call out Cardillo’s attempt to sexualize a father’s love for his son, something many people said was a result of homophobia, toxic masculinity, and rigid gender roles.

Fellas, is it gay to kiss your only living son on the cheek? https://t.co/gthU9gEo39

Are they trying to lose? Joe Biden loves his family too much? What is this? https://t.co/IYTV0QyYf7

The answer is yes.
I kiss my son, hug him, hold him tight. Tons of tender moments with my little dude. He’s gonna grow up secure, strong, brave, and he’ll always know that he’s loved. So, yes. Keep holding them tight @JoeBiden. https://t.co/45gAz5njUO

Because my father and most men of his era were reluctant to show physical emotion in public I have made it a point to hug and kiss my son as often as he’ll let me. I feel sorry for you that seeing a father hug his son disturbs you.

I kiss my son all the time. He's fifteen. I'll kiss him till the day I die. And not all the repressed man box masculinity bullshit in the world will change that. You do disconnection, Ima do love and connection.

This is a pic of my oldest brother and I, and this is how my father showed love to us. This pic of @JoeBiden just shows a man who loves his son, unconditionally. pic.twitter.com/AryMHtEaC1

This photo makes me like Joe even more. I love my son more than anything in the world. The idea that men can't show affection with their sons is rooted in patriarchal, homophobic nonsense.

Others questioned Cardillo’s relationship with his father and wondered if he was tweeting this from a place of hurt about his own childhood.

Even Jake Tapper called out Cardillo… without using his name.

This era is full of unloved sons outing themselves and to be honest it’s really kind of sad.

I’m a trained therapist and if anyone looks at this photo and sees anything other than father + son love, I’d recommend therapy until the person knows diff bw healthy + unhealthy touching.

I think you're revealing more about yourself than anyone else.

John, I am so sorry to hear that your relationship with your father was distant and terrible. Thoughts and prayers. pic.twitter.com/QSavUvuLV1

Some people shared photos of fathers loving their sons… or talked about how they wish they could have that kind of relationship.

I love my little boy deeply and will be planting kisses on his cheek forever.

BTW, if you find yourself on the side of those having a problem with a dad showing love for his son, it probably says more about you than those you criticize.#JoeBiden https://t.co/ZWltxhBZrn pic.twitter.com/bU8AP2UZmL

I didn’t realize we are sharing sweet photos of fathers and sons pic.twitter.com/bzm1f5erqJ

I remember when my dad died. There were lots of things unspoken. Had he embraced me like this I might be a different person. The idea that anyone would shame @JoeBiden for his unconditional love of his kid says more about them than him. I love him even more. ❤️ https://t.co/QCtvFgHrJL

Someone even pointed out that Donald Trump kisses his adult sons.

The only decent thing I’ve ever seen in Tr*mp is that he kisses his sons in public.

And, of course, there were jokes.

parents, make sure your children understand that you love them, so they don't grow up to be John Cardillo

Oh I don't know John, does this look like an appropriate father/son interaction to you? .. pic.twitter.com/GFsj7tG7VP

After all these responses, Cardillo didn’t seem to change his mind and called men who kiss their sons “sissies.”

I mean, I knew dudes on the left were big beta sissies, but tonight has taken it to a whole new level.