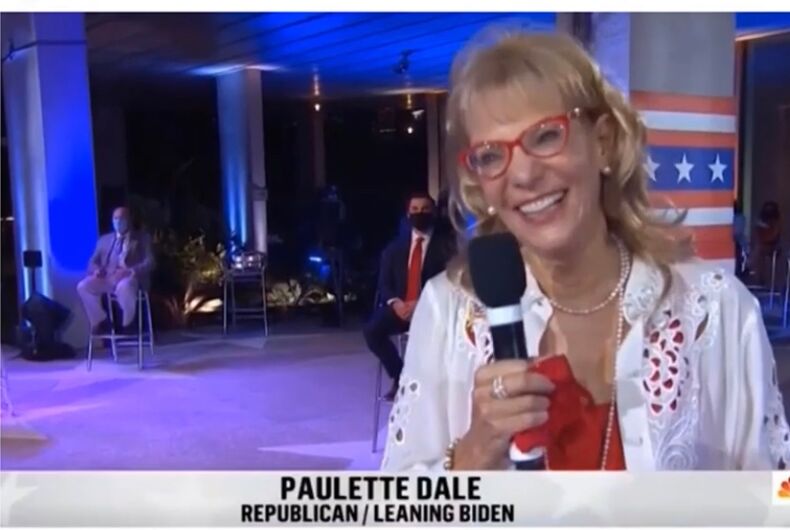 Paulette Dale became an instant polarizing figure when she asked President Donald Trump a question during his town hall in Miami, Florida. Now, she is the freshest punching bag for political commentators and the media.

She was introduced as a Republican that had voted for Hillary Clinton in 2016 – and despite her giddy interaction with Trump, Dale has revealed that she’s not convinced by the President’s act and plans to vote for Joe Biden, the Democratic nominee for President. Early.

Related: A Florida city’s LGBTQ nondiscrimination law was struck down by the court. So they passed it again.

At Thursday’s Republican town hall, held in place of the second Presidential debate due to conflicts over Trump’s COVID-19 diagnosis, Dale was one of numerous attendees that was selected to query the President. Live on air on NBC, she felt compelled to note before her question that she found Trump to be “so handsome.”

“I have to say, you have a great smile…you’re so handsome when you smile,” she commented before moving on to her question, which was on beneficiaries of the Deferred Action for Childhood Arrivals (DACA) policy. “Surveys show that most Americans and the majority of Republicans support the Dreamers program. So my question for you, Mr. President, is: If you are elected to a second term, do you expect to pursue your previous efforts to cut the DACA program?”

Voter to President Trump at #TrumpTownHall: “You’re so handsome when you smile." pic.twitter.com/KgJThAtAQg

But in reality, Dale is not so smitten with Trump as she may have appeared. She is a married, retired Miami Dade college professor now residing in Palm Beach County. The 68 year-old has written several books on linguistics and holds a Ph.D. from the University of Florida. Directly after the town hall, she spoke with a Miami New Times reporter.

“I think the man has a nice smile. However, I’m not a fan,” the registered Republican said. She feels that Trump “steps in it every time he opens his mouth.” She said many of her students were DACA recipients, and as the daughter of two Eastern European asylum-seeking immigrants, she needed to learn more about Trump’s planned position if re-elected.

Despite it all, what Dale really wants from President Trump? “I wish he would smile more and talk less.” Some believe that’s a nod to a line delivered by Aaron Burr to Alexander Hamilton, from the musical Hamilton.

She doesn’t regret the compliment, and in fact stands behind it: “I believe the man has a very nice smile; there was no reason not to comment on it….I like nice teeth.”

Regardless, Trump’s smile isn’t good enough to make Dale overlook his actions as President. “He’s very combative and he doesn’t believe in science, and that’s a big concern to me,” she declares, noting that her second, unselected question was on climate change. “By his own words, he knows more than the [military] generals, knows more than the public-health experts, knows more than anybody.”

In the end, that’s the main reason she’s voting across the aisle as soon as early voting opens near her, which will be as early as Monday. “I believe Joe Biden will listen to the experts,” she says.

In comments, Dale’s husband has said that she is trying to re-register as a Democrat but she “[haven’t] gotten around to changing her voter registration.” No word on how he feels about his wife’s affection for another man’s smile.

Trump’s answer to her DACA question? In part, the President said to her, “you will be, I think, very happy over the course of the next year, because I feel the same way that you do about it.”

They might not feel the same way after all.