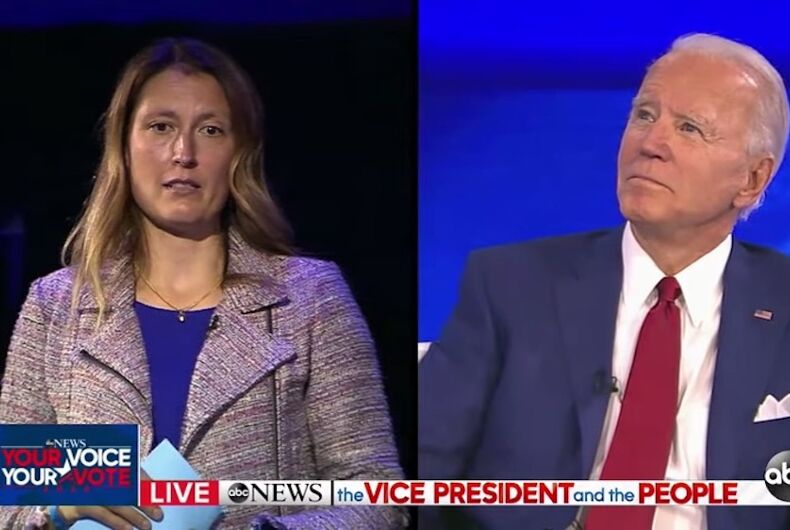 If you ever needed an illustration of who should be president and who should not, all you have to do is look at the competing townhalls with Joe Biden and Donald Trump last night.

In his town hall, Biden fielded a question from a woman with a transgender daughter. “I promise you,” Biden responded. “there is no reason to suggest that there should be any right denied your daughter… Zero, none.”

Biden said that he would “flat out change the law” and eliminate the executive orders that Trump instituted banning transgender military personnel. Biden also condemned the epidemic of murders of transgender women of color.

Biden’s response demonstrated his empathy, which is central to his appeal as a candidate. That didn’t always translate into the best words. He got the number of transgender women who had been murdered wrong. In discussing his late son’s Beau role in passing transgender protections in Delaware, Biden talked about “a man who became a woman.” (Oy.)

But Biden’s verbal stumbles didn’t detract from his historic moment, the first time a presidential nominee spoke extensively and with heartfelt feeling about the discrimination the transgender community has experienced, to say nothing of his pledge to address it.

Then there was President Trump’s town hall.

Trump’s performance during the debate with Biden two weeks ago was a disaster with voters. If he thought the townhall would be his chance to recover he was wrong because Trump was his usual self, spewing lies and wingnut conspiracies.

There was the dogwhistle for the QAnon crowd. There was the lie that the pandemic is over. There was a refusal to condemn white supremacists. In short, it was the typical Trump shtick.

Unfortunately for Trump, his moderator, Savannah Guthrie, was having none of it. In a model that the debate moderators should have used, Guthrie kept following up and frankly calling Trump out on his nonsense.

For example, Trump tried to slough off his retweeting a crazy conspiracy that Biden had a Navy Seal team killed to cover up the faking of Osama bin Laden’s death. Guthrie called Trump on his irresponsibility.

“You’re the president,” she said. “You’re not like someone’s crazy uncle who can retweet whatever.”

When Trump tried to say he relied on social media “to get the word out,” Guthrie had a quick retort: “The word is false.”

The fact that Trump even had a town hall was a scandal of NBC’s making. As if it wasn’t bad enough that the network gave us The Apprentice, which built the myth of Trump as a business genius, they allowed the president to intrude on Biden’s time. That, after Trump baled on a virtual debate scheduled for the same night.

In return, Trump gave NBC a train wreck of a townhall. Often, he seemed to be running against Guthrie, not Biden. When Trump asked Guthrie why she wasn’t asking Biden about Antifa, Guthrie replied, “Because you’re here.”

And Republicans wonder why women are saying they will vote for Biden.