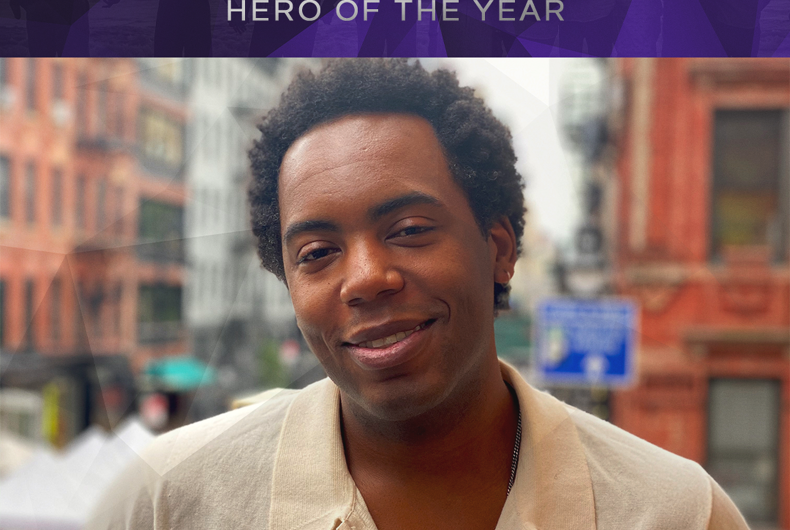 When the pandemic began to devastate New York City, Julian L. Watkins, MD, was already doing crucial healthcare work for the city. Over the past seven months, though, Dr. Watkins has stepped up to serve the city in a different capacity: fighting the coronavirus full time.

As the Physician in Charge of the Riverside Sexual Health Clinic in the New York Department of Health and Mental Hygiene’s Bureau of Sexually Transmitted Infection Control (BSTI), Dr. Watkins directed patient care and managed daily clinic operations in the fight against sexually transmitted infections, and especially HIV/AIDS.

Related: And the LGBTQ Nation Heroes of the Year are…

Dr. Watkins was activated first as a contract tracer, then on the city’s helpline for healthcare providers, and now as the Lead Equity Officer for the trace component of New York City’s Covid-19 Test and Trace program, where he ensures that initiatives are being equitably implemented across the city.

The role makes sense for Dr. Watkins, who has devoted his entire career to making healthcare more equitable. As a queer, Afro-Latino man, he has worked hard to fight the healthcare disparities faced by marginalized communities.

“[Equity] is really important and vital and necessary,” he told LGBTQ Nation. “Because it’s a thing that’s left out of medicine in the traditional sense. In the U.S., the way it’s taught isn’t very inclusive of non-straight, cisgender, healthy, young, male-bodied people. There can’t be a one-size-fits-all approach to medicine.”

“I want people, when they see the work I do and they see the way I move through the world, I want them to feel like they have an advocate, they have someone looking out for them. There is someone in the Health Department who is thinking exactly about you and how things affect your life. You, too, have friends in ‘high places.'”

Dr. Watkins prefers to use the term “health justice” over health equity.

“I think people understand the term justice better. It evokes something somewhere deep down. You hear the word justice and you feel it in your bones.”

He grew up in the suburbs of Atlanta. His father is Black and was born in the U.S., and his mother immigrated from Panama.

Growing up at the intersection of multiple marginalized identities is a major reason he decided to become a doctor. He also always loved talking to people and was a natural caregiver.

After attending Medical School at Howard University, he completed his residency in Internal Medicine at the University of Miami/Jackson Memorial Hospital, where he also served as the first Primary Care Chief Medical Resident. In 2015, he moved to New York and worked in internal medicine at Columbia University.

“But November 2016 happened, and I just found myself feeling unfulfilled,” he said. “And just in a really weird headspace, and just looking for something else.”

While riding the subway, he saw an advertisement from the Bureau of Sexually Transmitted Infections. It was a cheeky, sexually suggestive cartoon encouraging those who might be at risk of an STI to visit a clinic.

“I saw that and I thought it was so interesting. It was so provocative, and it was so sex-positive. So I went online and googled the bureau, and I applied.”

Dr. Watkins has loved working for BSTI ever since.

“I think that solidified a lot of things for me, dealing with the last pandemic that ravaged this city in a major way and changed so much about our lives. It just felt good dealing with people and meeting them where they were.”

Dr. Watkins says many of his patients at the clinic had never had a Black doctor, or a queer doctor, or an Afro-Latino doctor. And many have been grateful for his presence.

His colleague, nurse Carlotta Starks, who nominated him for this honor, agrees.

“[Julian] is a talented medical provider who has a gift engaging patients through open and honest conversation — in both English and Spanish,” Starks wrote in her nomination letter. “Patients of all backgrounds and identities always commented on how wonderful he is to speak with, and he communicates in ways to always uplift and inspire others.”

“Julian is constantly reflecting on how best he can serve the queer and POC community. I have never met a provider so committed to his values that brings his love for humanity into everything he does both professionally and personally,” she continued.

“I have seen patients, and individuals leave an interaction with him, different and changed for the better. I think he takes the time to show each individual patient that they matter and that he cares. That can change a patient’s outcome and change a patient life.”

FREEDOM, GOOD HEALTH AND POWER TO THE PEOPLE ✊🏾🖤🌈 foto: @carlottamanzo

The HIV Crisis & COVID-19 Changed Everything

Through the pandemic, Dr. Watkins has also been working to serve his community outside of work. When the shutdown began, he was bombarded with so many questions from family and friends, that he decided to start recording videos on Instagram Live to bring people knowledge and comfort.

“People were just so scared and had no clear information. I didn’t have much more, but I definitely had an understanding of what was going on. [I started] talking people through how to be safe, and how to wash your hands, and explaining to people how to put gloves on the right way. A lot of people started tuning in.”

This effort evolved into The People’s Clinic, which Dr. Watkins hosted with Starks on an online public access station, 8Ball TV. Right now, he said, the show has been a bit in flux as work has gotten busier, and he’s proud of the time he spent on it.

“[When the pandemic began], I was instantly reminded of HIV,” he said, “the things that were happening in the city and the world when the HIV crisis was developing, and I thought back to that time and was remembering all these professors and the sort of people in my life that describe that time as transformative.”

“I didn’t know [Covid-19] would change things so much, but I knew now is the time to figure that out, how should you act in this time? What do people need? With that historical perspective, it prepared me for getting involved in the work of fighting the coronavirus.”

“The HIV crisis and COVID-19 have changed Julian,” Starks said. “He has never approached medicine as business as usual. He has always approached medicine as if lives depend on it because they do. He is constantly imagining ways that health care providers and systems can improve interventions and outcomes for patients on small and large scales. “

“A lot of what we do in HIV care and prevention is seeing how the HIV pandemic has played out over these years and seeing who has HIV, who is living with HIV, who gets HIV in this country and in this city specifically, and understanding that there’s a gap” in how limited resources are used, Watkins said.

“People who get prescribed PrEP are generally not the people who would get the most benefit from it.”

“It’s calling out that inequity,” he continued. “In New York City, more cisgender Black women get HIV from sexual contact than cisgender, white, gay-identified people. Look at these truths, look at them as things that can be made better. You don’t have to look at it and feel ashamed and look away. That doesn’t help the people who need that help.”

LOVE IS THE MESSAGE✊🏾🖤#blm #nyc

A Love Letter to the LGBTQ Community

As he considers the honor of being LGBTQ Nation’s Hero of the Year, Dr. Watkins is happy to embrace the word. He believes that too often marginalized people are taught to shy away from praise and accolades.

“We kind of were taught and socialized to keep your head down, don’t make too much noise. Just do the work and don’t bring too much attention. I’ve wanted to get comfortable with the idea of, if you do a good thing and someone appreciates it or recognizes it, there’s no shame in that.”

He is also happy to increase the visibility of the fight for health justice.

Over the past six months, he has been most proud of the work he has done engaging with the community, namely with The People’s Clinic, and how it has enabled him to speak directly to those with concerns. Over time, he said, the videos evolved to address not only the pandemic but also other issues of health justice as well.

“I see my work in The People’s Clinic, and a lot of the work I do within the health department, is part of this continuum of liberation, struggle, and resistance that people have been doing for hundreds of years before me, and they’ll be doing it after I’m gone, but knowing now is my time to figure it out and keep that energy moving.”

According to Starks, Dr. Watkins has an amazing ability to envision the possibility of change.

“He has this unflappable core,” she said, “that is grounded in his values and in love and cannot be moved.  Time and time again he has stood up for equality and justice in all aspects of his life. He is a leader and healthcare hero who has the courage to face any obstacle and never allows fear [to] stand in the way.

He is proud, he said, that he has decided to move through the world with what he calls “a love ethic.”

“My life, I want it to be a love letter to my communities and the people who have sustained me. I want other people to feel seen and feel understood. The culture of healthcare and medicine is so messed up. I want to bring that energy to the discussion and hopefully affect change.”