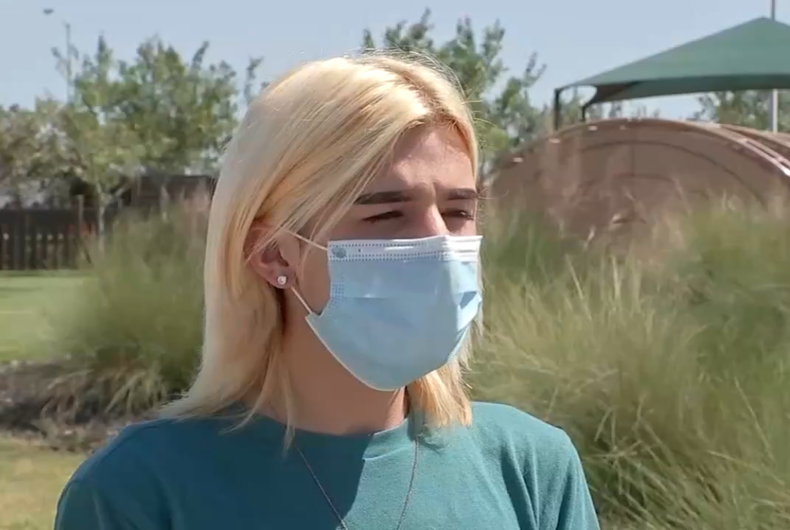 In an announcement made last week, the Louise Independent School District in Texas stopped offering remote learning. They informed families in the over 400-student district that in-person learning was to begin this Tuesday.

And that’s when a transgender high school senior was thrown into a standoff with her school.

Sanay Martinez, a student at Louise High School, had just come out as trans. Now she believes that she won’t be able to return to complete her final school year, as the school told her that she must “adhere to the dress code” of her “biological gender” if she wants to attend classes.

“They told me I can’t come back until I cut my hair and take out my piercings,” Martinez told ABC13.

“As a female, I should follow the female handbook and not the male handbook,” Martinez said. “It’s my senior year and I would love to go back to Louise ISD, but I don’t feel welcome at all.”

Louise ISD superintendent Dr. Garth Oliver claims people in the district “love and accept” Martinez but that she “must follow the rules.”

Martinez’s best friend Alexis Mendoza said the teen may try to transfer to a different school in a nearby district that has a more welcoming environment.

“They’re being really disrespectful,” Mendoza said. “They know [Sanay] since [she] was in Pre-K. They knew [she] wanted to be gay at first, and they were OK with that, but when [she] came out as trans, that’s when everything changed.”

While Martinez isn’t sure what will happen, she said that identity shouldn’t matter when it comes to education.

“I’m here to tell everyone, that transgender students should be allowed for their education,” she said. “It is their rightful purpose for them to go into the school and get their education. It doesn’t matter what race, gender, sexuality.”

Louise HS senior “Sanay” Martinez was told she can’t come back to school until she follows dress code (no long hair or earrings for males). Sanay says that’s not fair since she identifies as a trans woman. 👩🏼 Louise ISD tells me it goes by BIOLOGICAL gender. pic.twitter.com/zexf0xqHvu

My attorney friend just sent me something from the Texas Association of School Boards that may help Sanay. In short, it says districts should permit transgender students to wear clothing that align with their gender identity. pic.twitter.com/dFWfGTKXlw

Historical photos of men in love: The rocking chair on the rooftop