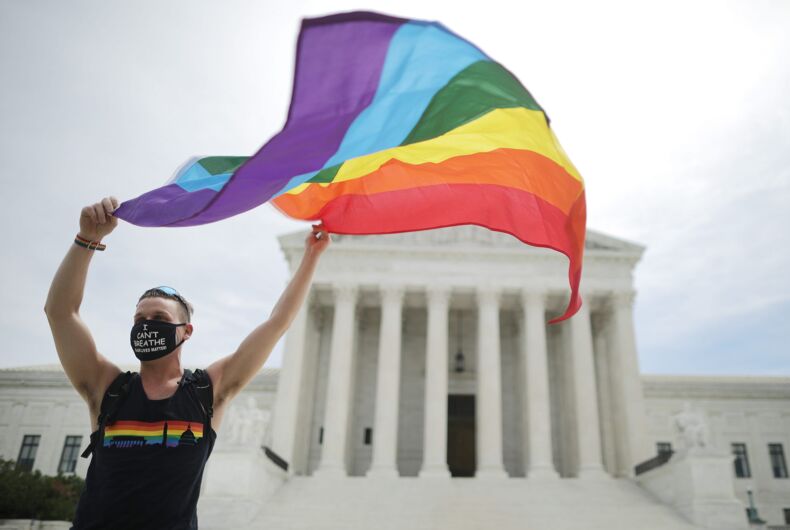 Come hell or high COVID, confirmation hearings will start tomorrow for Amy Coney Barrett, President Trump’s nominee for the Supreme Court. Barrett has an impeccably anti-LGBTQ record, and her confirmation to the Court will cement its right-wing bias for years to come.

Related: Diversity is one of America’s greatest assets. It’s time we took pride in it again.

Of course, they didn’t say so in as many words. The immediate case involved Kentucky clerk Kim Davis, who refused to issue marriage licenses to same-sex couples and was briefly jailed for her refusal to follow the law. Davis wanted the Supreme Court to overturn lower court rulings that held her responsible for violating people’s civil rights.

The Court concluded that Davis’ appeal wasn’t the kind of case the Supreme Court should hear. But Alito and Thomas used the occasion to say bluntly that the Court’s Obergefell decision, which made marriage a national right, “bypassed” the “democratic process” and caused irreparable harm to people with “sincerely held religious beliefs concerning marriage.” The Court needs to fix this outrage, they concluded, by overturning Obergefell.

With Barrett on the Court, it seems likely that Alito and Thomas would have a willing ally. After all, Barrett has actually spoken at an event sponsored by Alliance Defending Freedom, the very same hate group that defended Kim Davis.

Indeed, the head of ADF, Michael Farris, attended the Rose Garden ceremony for Barrett’s nomination, which will be better remembered as the White House COVID “superspreader” event.

But three justices doesn’t constitute a majority. Would at least two of the other three conservative justices go along with such a radical gesture? The odds are probably not.

Chief Justice Roberts seems the least likely among them to want to revisit marriage equality. For one thing, even his dissent in the case seemed a tacit acknowledgment that he was on the wrong side of history. Although he too complained that the issue should not have been decided by the Court, Roberts is very protective of the Supreme Court’s reputation. He would probably balk at overturning a decision that would disrupt thousands of couples and that is now supported by two-thirds of the American public.

That leaves Neil Gorsuch and Brett Kavanaugh, Trump’s first two Court nominees. While it’s anyone’s guess what either justice might do, Gorsuch sent a strong signal about his thinking in his surprise decision last June supporting federal legal protections for LGBTQ people. In that case, Gorsuch made clear that conservative Christians have every reason to seek exception to laws they don’t like and that the Court should take that consideration into account.

While an outright overturn of marriage equality is unlikely, the Court seems committed to knocking as many holes in it as possible by embracing the right’s religious liberty argument. Sure, same-sex couples can still get married – but don’t expect businesses to provide you with services. Or rent to you. Or not fire you. Those businesses might have “sincerely held beliefs” that trump your rights.

By doing so, the conservative majority could erode the right without eliminating it altogether. Marriage equality would always carry with it a footnote for all the exceptions that go along with it. The marriages of same-sex couples would be separate and unequal.

That is a much more likely possibility than overturning marriage equality altogether. It’s not as calamitous as ending freedom to marry outright, but it would still be a calamity. One that highlights, yet again, how high the stakes are when the GOP is able to pack the Supreme Court.